Until a few years ago, winter mountaineering was the sole domain of the toughest of extreme professional climbers. But now commercial expedition organizers are starting to get in on the act. 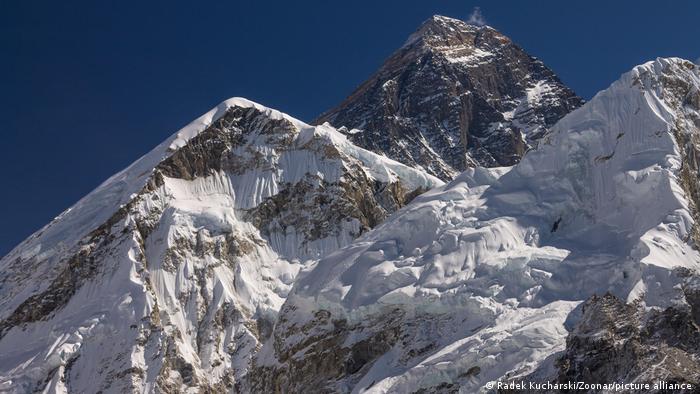 "Whichever style you decide to climb, winter expeditions on 8,000m peaks are anything but a walk in the park and no one without exception has collected easy and abundant successes in this type of vertical adventure," Simone Moro wrote on Instagram.

With more than 20 winter expeditions under his belt, the 54-year-old Italian certainly knows what he's talking about.

For the fourth time in the past six years, Moro is now attempting a climb during the cold season on Manaslu in western Nepal. He has been on the mountain since Christmas. Two weeks ago, 3 meters of fresh snow fell on Manaslu. An avalanche hit the base camp at 4,850 meters, but almost all the climbers had left the camp beforehand.

Moro's reference to different styles of mountaineering on eight-thousanders is in part due to the fact that commercial companies are now offering expeditions to paying customers during the winter.

This winter, Nepalese company Dolma Outdoor Expeditions is planning to take Tseng Ko-Erh, also known as "Grace" Tseng, up K2 (8,611 meters), the second-highest mountain on earth. Six experienced Nepalese climbers and one Pakistani climber led by Nima Gyalzen Sherpa are to secure the route with fixed ropes and lead the 28-year-old Taiwanese woman to the summit — with the use of bottled oxygen.

According to the mountaineering publication "Himalayan Database," the 36-year-old Sherpa has successfully scaled eight-thousanders more than 20 times, including eight times on Mount Everest (8,849 meters) alone. Grace Tseng has set her sights on becoming the first Taiwanese woman to climb all 14 eight-thousanders. Last fall, she stood on the summit of Kangchenjunga (8,586 meters), her fifth eight-thousander, wearing an oxygen mask. On this expedition, too, she was the only client, with four Sherpas assisting her.

In January 2021, a 10-man Nepalese team climbed K2 for the first time in winter. Five experienced climbers died during that winter season. A year ago, in addition to professional climbers, several dozen paying customers of a commercial operator unsuccessfully attempted to scale the dangerous mountain.

Some wound up with frostbitten fingers and toes for their efforts.

Due to the extremely low temperatures, particularly low air pressure, storms, and deep snow, winter mountaineering on eight-thousanders was long considered far too demanding and dangerous for amateur climbers to attempt.

The Polish specialists who dominated the winter mountaineering scene, especially in the 1980s, when they achieved the first seven winter first ascents of eight-thousanders, were reverently referred to as the "Ice Warriors."

"For me, this is the future of Himalayan mountaineering – the most difficult routes in the toughest conditions," Ice Warrior Andrzej Zawada wrote back then. At the time, the expedition leader of the 1980 winter first ascent of Mount Everest, underestimated the commercial potential of climbing the world's highest mountains.

'The mountains belong to everyone'

With base camps on eight-thousanders regularly filling up with commercial teams in the spring and summer, in 2018 one Nepalese operator started offering Everest winter expeditions. Interestingly, the introductory passage in their sales pitch was changed from "Welcome all — but you should be experienced!" to "Welcome all — if you would like to take an advantage of less crowded and more adventure on Everest."

Since then, winter professionals like Simone Moro have almost come to terms with the fact that they may encounter commercial teams during their attempts.

"The mountains belong to everybody," the Italian said at the start of his Manaslu expedition. "So I can't impose my wish or style."

However, it seems unlikely that commercial winter mountaineering on eight-thousanders will ever become a mass phenomenon. The challenges are simply too many and the chances of success too low, even if — as in Grace Tseng's case — you rely on concentrated Sherpa power.

This winter, a couple of German mountaineers are taking on two different eight-thousanders without Sherpa support.

Jost Kobusch is attempting to climb Mount Everest for a second time during the cold season. The 29-year-old is aiming to scale the world's highest mountain not just solo but also without bottled oxygen via the rarely used West Ridge and the Hornbein Couloir, a gully on the north face of Everest. Having reached an altitude of just under 7,400 meters in 2020, he has now set himself the goal of 8,000 meters. 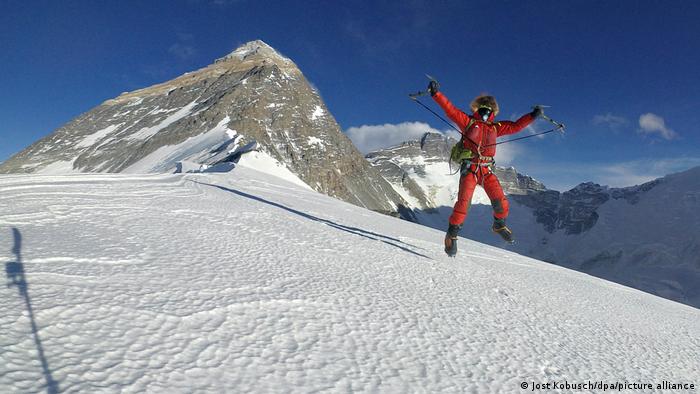 "I don't know what to expect up there," Kobusch said. "But that's what's so exciting."

Meanwhile, David Göttler, 43, and his Italian teammate, Herve Barmasse, 44, are attempting to scale Nanga Parbat (8,125 meters) without the use of fixed high camps, fixed ropes or bottled oxygen. In his first winter attempt on this eight-thousander, Göttler reached an altitude of 7,400 meters in 2014.

Göttler sees their chances as "very low, to be honest, but higher than zero as long as we are here and try." He and Barmasse turned back a week ago at 6,400 meters and are now set to make a second attempt at reaching the summit.

"The isolation we felt over the past few days was immense," Götter said via his Instagram account.

"It wasn't frightening; more a question of scale, an extreme degree of remoteness and insignificance that only these giant mountains can make you feel. This in turn brings humility and a slight feeling of intimidation. An awareness of how tiny and fragile we are, but simultaneously seeing what we are capable of when we step out of the comfort zone."