French Prime Minister Manuel Valls has announced a new government after the cabinet resigned following infighting over the country's economy. Analysts said the move was also a signal to France's European partners. 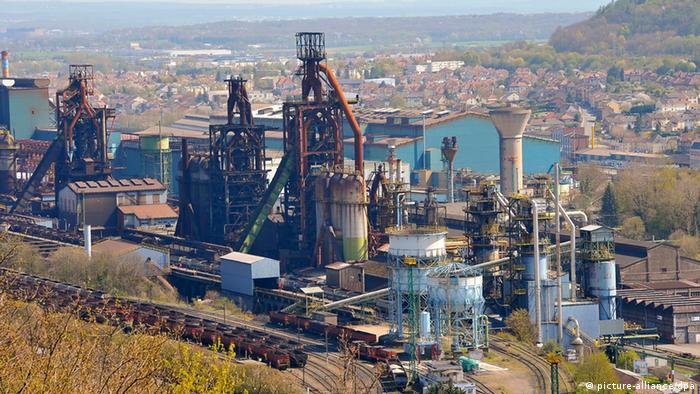 French President Francois Hollande had instructed Prime Minister Manuel Valls to form a new government - "a team that supports the objectives he has set out for the country," Hollande's office said in a statement.

Valls had offered Hollande the resignation of a cabinet that was increasingly mired in disagreement after only five months in office. Economy Minister Arnaud Montebourg in particular, to the left of the ruling Socialists, had repeatedly and fiercely criticized the government's economic policies.

Apparently, Montebourg's interview with Le Monde newspaper on Sunday was the last straw. "Europe is threatened by a recession," he told the paper, pointing out that there was no growth in the eurozone economies in the second quarter. "We have to give priority to getting out of the crisis and relegate to second place the dogmatic reduction of deficits, which is driving us to austerity and a continued rise in unemployment," Montebourg said.

The French unemployment rate stands at more than 10 percent - twice as high as in Germany.

Montebourg also blamed the German government for the persistent crisis in France and other states that share the common currency. "Germany is trapped in an austerity policy that it imposed across Europe," Montebourg said. It is not in France's interest, he added, to "conform to the ideological principles of Germany's conservatives."

Montebourg is one of the ruling Socialist Party's numerous 'frondeurs' - rebellious members that favor state investment programs but are opposed to continued reforms and austerity plans.

Montebourg said he and two other left-wing ministers would not seek roles in a new cabinet that Valls is scheduled to announce on Tuesday.

Signal to the party

Simply dismissing Montebourg would not have been enough, according to Claire Demesmay of the Berlin-based German Council on Foreign Relations. The government's resignation is a "signal to the entire Parti Socialiste and all of France's leftist parties," the think tank's head of the Franco-German Relations Program told DW. "It's also aimed at showing the European partners who is the boss in the government, and that they should continue to take France seriously." 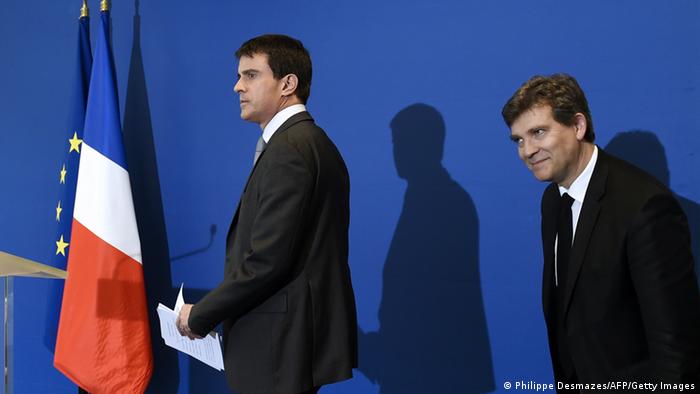 Just last week, President Hollande reaffirmed his reform goals, pointing out that poor economic data are no reason to deviate from the reform course. "On the contrary, we need to go faster and further," he told Le Monde. Hollande added that any "zig-zag" would "make our policy incomprehensible and would not produce results."

But many observers accuse Hollande of pursuing said "zig-zag" course. Hollande's economic policy, the Responsibility Pact, is mainly about cutting state expenditures and tax breaks for companies, Claire Demesmay explains. "So far, there haven't been any real, painful structural reforms at all."

A growing number of French are calling for reforms to promote economic growth similar to those introduced by former German Chancellor Gerhard Schröder about ten years ago: Germany's Agenda 2010. "We need an Agenda 2020," French economist Alain Minc told German weekly Wirtschaftswoche. Whether such reforms could be implemented in France with its traditionally combative unions remains dubious.

President Hollande, whose popularity has reached a record low, would like to be active on both fronts: he wants to continue his reform course, but he would also like to stimulate growth with state investment programs.

He faces a dilemma that is almost impossible to solve, Claire Demesmay says.

The President has to show his superiority, and that he can do as he sees fit, she says. "On the other hand, he has to abide by EU rules, he doesn't have a choice in that matter."

The eurozone's Stability and Growth Pact stipulates that governments must keep their budget deficits within the limits of three percent of GDP. Both France and Italy have repeatedly signaled they need more time to adhere to the regulation. But Germany's Finance Minister Wolfgang Schäuble, for one, is opposed to changing that rule: "You don't have to change the rules, you have to comply with them," he argued after a meeting of European Finance Ministers in June.

A spokesman for the German government on Monday declined to comment on the French government's resignation. "At the moment, that's a domestic French problem," he said.

This past weekend, European Central Bank (ECB) President Mario Draghi raised hopes for states that would prefer to combat the crisis with more money rather than austerity programs.

Speaking at a global central banking conference in Jackson Hole, Wyoming, Draghi said he was prepared to respond with all "available" tools should inflation drop further.

In that respect, it would be helpful if fiscal policies played a greater role, the head of the ECB said. In other words: the governments should start spending more money.

France's outgoing economy minister has said he won't figure in Prime Minister Manuel Valls' new government. Valls was working to form a new cabinet after he and his government resigned amid a row over economic policy. (25.08.2014)

'Hollande has to act now'

French President Francois Hollande has dissolved the government over infighting about the country's stagnant economy. The upcoming reshuffle comes as no surprise to Frank Baasner, head of the German-French Institute. (25.08.2014)

Following victory by France's far-right National Front at the weekend's EU polls, the country's Prime Minister has wasted no time to promise more tax cuts for low earners. He admitted the burden had become unbearable. (26.05.2014)