French government to shut down Uber after violent protests

French Interior Minister Cazeneuve has assured that low-cost car service UberPop will be closed. A violent taxi drivers' protest drew strong criticism from France government, but the cabbies are also getting their wish. 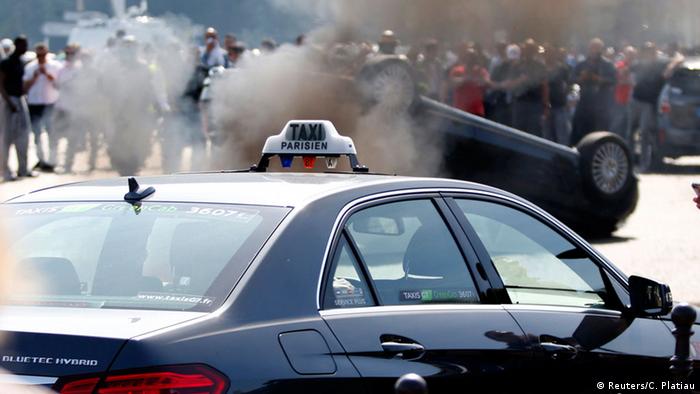 Bernard Cazeneuve, who met with representatives of taxi drivers' unions on Friday, said he would meet UberPop officials and tell them that their service is "illegal."

"It must, therefore, be closed," Cazeneuve said. "The government will never accept the law of the jungle."

In the mean time, Cazeneuve said, "the vehicles of UberPOP drivers should be systematically impounded when they are openly breaking the law."

UberPop, a US ride-hailing app, allows customers to hire rides with people operating their private cars - at prices far below the cost of a conventional cab. The company has been operating in Paris since 2011, and claims to have 400,000 customers per month in France.

A French law came into force in January banning any service that connects passengers with unlicensed drivers, however, Uber filed a legal challenge against the law and a final verdict is not expected before September. The ban does not apply to the separate licensed-chauffeur service called UberX.

French cabbies complain that UberPop drivers can undercut them due to much lower costs as they are not subject to the 250 hours of mandatory training that they have to undergo to get their licenses, nor are they required to carry the same insurance. This has prompted some government officials to express concerns about the safety of passengers using the service.

Traffic in parts of Paris and a number of other French cities was brought to a halt on Thursday as taxi drivers held nationwide protests against UberPop.

The drivers refused to provide service to passengers at major airports and train stations, blocking major thoroughfares, such as the ring road around Paris - and even torching cars.

On Friday, French President Francois Hollande condemned the protests as "unacceptable violence in a democracy, in a country like France," but also said the UberPop service should be taken off the road.

Even Courtney Love, the wife of deceased US rocker Kurt Cobain, was caught up in Thursday's chaos at Charles de Gaulle airport in Paris, issuing several fraught Tweets of what she described as a "hostage" situation.

Among the other targets disrupted by the striking cabbies were the airport and main train station in the southern port of Marseille. Police eventually used tear gas to break up that protest.

"These incidents give a deplorable image to visitors of our country."

Taxi drivers in other European countries have also held protests against Uber, and the service has been banned in Germany.

Car services like Uber, which allow customers to hire a car via smartphone apps, are controversial across the world. Cab drivers in New York are now demanding tighter regulation of the ride-sharing service. (19.06.2015)