The sentencing in France of three men for an anti-Semitic rape-robbery in Paris in 2014 has revived concerns within the Jewish community. The men's defense lawyer claimed they were not anti-Semitic but ignorant. 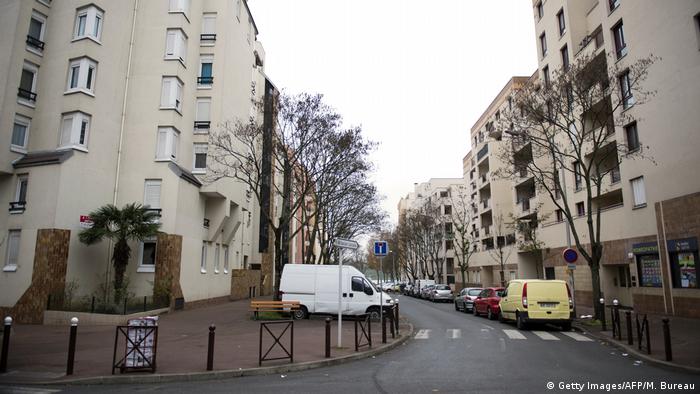 The court gave the three men sentences of eight, 13 and 16 years for the crime they carried out in the Creteil suburb of Paris in 2014.

A 22-year-old who made comments including "for my brothers in Palestine," and suggesting they should "gas" their victims during the attack, before destroying all the Jewish images in the apartment, is still on the run. He was sentenced in absentia.

The 26-year-old and 23-year-old co-accused were in court for the sentencing. They have already been detained for four years.

Defense lawyer Marie Dose told the court in Val-de-Marne, southeast of the French capital on Friday: "They are not anti-Semitic, they are ignorant. They are swimming in gross stupidity."

Prosecutors said there was no doubt the victims had been chosen because the attackers believed them to be Jewish. 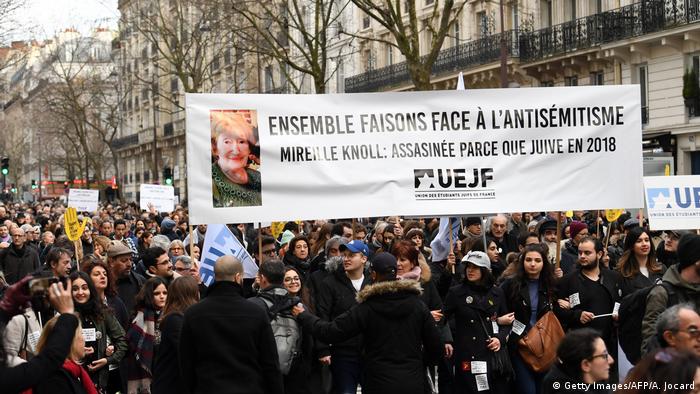 Citizens have taken to the street to condemn an increase in anti-Semitic attacks in France, such as that of Mireille Knoll, who was murdered at home in March 2018

Read more: How will France deal with rising anti-Semitism?

Speaking as a civil party in the trial, Dorothee Bisaccia-Bernstein for the League against Racism and Antisemitism (LICRA) told the court and the judges: "You are not asked to say that the accused are anti-Semites. The only question you are asked is: were their victims targeted because they were Jewish?"

One of the accused in court had been questioned about a number of incidents during his detention since his arrest after the December 2014 attack. "The director of the prison is Jewish, she knows me because of this case," he said. Asked by Bisaccia-Bernstein how he knew she was Jewish, he said: "I can see it in her eyes."

The victims, 21-year-old Jonathan and 20-year-old Laurine had been alone in the Paris apartment which belonged to Jonathan's parents at the time of the attack. The three men, armed and hooded, had rung the doorbell. Laurine answered and the men forced their way in, putting a gun in Jonathan's mouth. They demanded "where is the money?"

"Jews do not put money in the bank," one of them said.

"We know your father is Jewish," one of the attackers said. "He goes out with a round cap on his head and he has a black Mercedes." 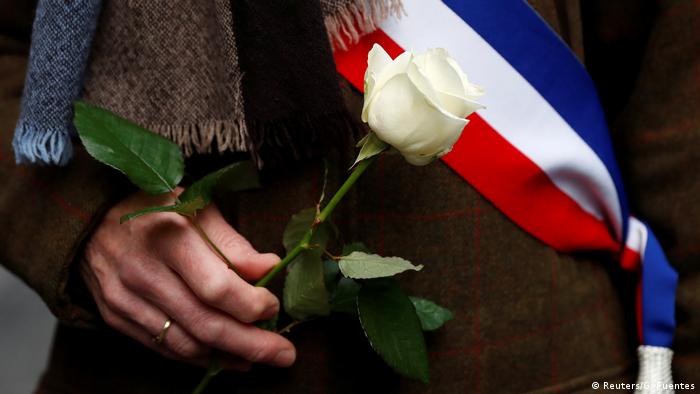 Effect on the victims

The victims also spoke of the effects of the attack on them, which had lasted for an hour and a half.

Jonathan said his whole life had collapsed: "You never feel safe, never," he told the court. "Afterwards, I lost my job, I had to see psychiatrists, I still have nightmares. That's what I want to tell the accused. They attacked people who have the same age as them, and ruined their lives."

The couple have since separated. "We did not know how to talk to each other, in fact," Jonathan said. "Just one word would often revive the whole incident."

He said he felt responsible for the attack in some way, especially after Laurine had gone back to her home town where she is now working as a chamber maid. Jonathan is working as a driver.

Prosecuting counsel commented during the hearing: "To say that 'Jews have money' is a prejudice, but it is not criminal. You have to fight it by going to schools. But racial prejudice, this human imbecility, becomes a prejudiced act when it is used to target its victims."

France has the largest Jewish population in Europe, but a rising number of attacks and experiences of expressed prejudice has caused an estimated 50,000 to leave the country in recent years.

A string of anti-Semitic attacks in Marseille has raised questions over whether Jewish men and boys should wear their skullcaps. The city's Jewish leader Zvi Ammar has urged Jews not to wear a kippa "until better days." (12.01.2016)