France's Republicans party has affirmed its support for its scandal-ridden presidential candidate Francois Fillon. The move puts Fillon back in control after former PM Alain Juppe said he would not stand in his place. 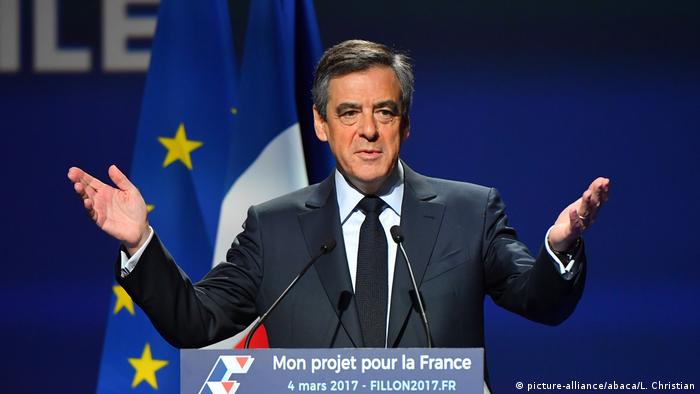 "The political committee, after a wide-ranging exchange, unanimously renewed its support for Francois Fillon," Larcher told reporters after around 20 party leaders met to "evaluate" the crisis sparked by the fake jobs scandal overshadowing Fillon's campaign.

Earlier on Monday, former French Prime Minister and conservative veteran Alain Juppe said he would not replace Fillon in the coming presidential election and offered no alternative candidates.

Juppe's decision removed a major rival for 63-year-old Fillon, who has decided to continue to run for the presidency despite the possibility of criminal charges later this month. He has also faced mounting criticism from within the Republicans and falling poll numbers.

Third in the polls

With only seven weeks to go before France heads to the polls in a two-stage vote, Fillon said: "We have lost too much time with vain debates, leaving the way open for the far right and candidates on the left who are rubbing their hands over our disunity."

Fillon was once favored to be France's next president, but his campaign has been dragged down by accusations that his wife was paid in public funds as his parliamentary aide without doing any work.

A rally with thousands of supporters near the Eiffel Tower on Sunday and an energetic performance in an interview on national television seemed to buoy his campaign.

Fillon now sits third in the polls under far-right National Front (FN) candidate Marine Le Pen and centrist former Economy Minister Emmanuel Macron. As the polls currently stand, Fillon would be eliminated in the first round vote in April.