The French government has outlined proposals for constitutional amendments which would shield state-of-emergency measures from legal challenges. Some French nationals could be stripped of their nationality. 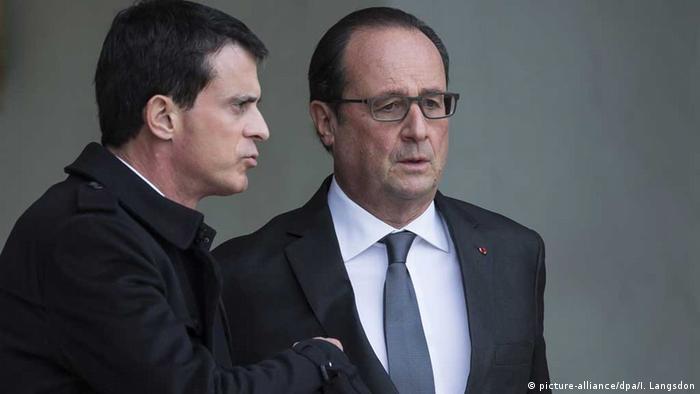 French Prime Minister Manuel Valls told a news conference on Wednesday that constitutional changes were necessary to protect France from the threat of French nationals returning home from territory controlled by the self-declared "Islamic State" (IS).

Under the planned changes, state-of-emergency laws which allow authorities to detain and search suspects without warrants would be enshrined in the French constitution. This would prevent the measures from being challenged in court.

Special policing powers used under the state of emergency are currently based on an ordinary law which can be challenged at the constitutional court.

"The threat has never been higher," Valls told reporters after a Cabinet meeting. "We must face up to a war, a war against terrorism, against jihadism, against radical Islam." Valls said the latest figures showed more than 1,000 people had left France to join the jihad in Syria and Iraq, of which an estimated 148 had died and 250 returned. More than 3,000 raids have taken place since the November 13 attacks in Paris, leading to 360 house arrests and 51 people jailed.

In the wake of the November attacks, President Francois Hollande called for the emergency powers to be protected from litigation by placing them in the constitution.

The constitutional reforms still need to be passed by a three-fifths majority in the upper and lower houses of parliament, where debates will start on February 3.

French law already allows the government to take away citizenship from French nationals born abroad if they are convicted of terrorism. Under the new proposal, France would also be able to take away citizenship from convicted terrorists even if they were born in France, Valls said. However the prime minister added that the proposed law would only apply to dual citizens, because international law prevents nations from making people stateless.

Amnesty International said the constitutional reforms were "deeply worrying" and added to an "already extensive and sometimes disproportionate arsenal" of measures. "The government cannot undermine the rule of law and violate the very human rights it is trying to protect: freedom of expression, freedom of movement and non-discrimination," said Gauri van Gulik, Amnesty's Europe director.

Controversial justice minister Christiane Taubira has come under pressure to resign after publicly opposing the changes. "Stripping citizenship from people born French, who have belonged to the national community since their birth, raises a substantial problem on a fundamental principle: the right of soil," Taubira told a radio station in Algeria. The north African state provides dual citizenship to many French nationals.

There are an estimated 3.5 million French people with dual nationality.

Europe on lookout for passports captured by 'Islamic State'

Police across Europe are on the lookout for Syrian and Iraqi passports seized Islamic State militants, German media have reported. Two Paris attack assailants may have used them to enter the EU. (20.12.2015)