French officials on Wednesday accused a German citizen of being a leading member of the al Qaeda terrorist network with ties to Osama bin Laden. The man is also suspected of involvement in a deadly bombing in Tunisia. 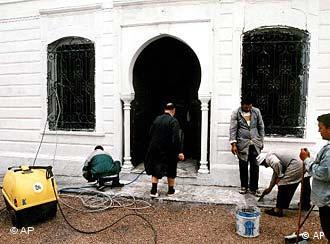 Fourteen German tourists died in the April 2002 bombing of a synagogue in Djerba, Tunisia.

Christian Ganczarski, a 36-year-old German citizen of Polish descent, was arrested on June 2 at Paris’ Charles de Gaulle airport. Although he has not yet been officially charged, French authorities appear convinced he is a high-ranking member of the Islamic extremist group al Qaeda.

"(Intelligence) services know that he is a top leader of al Qaeda, in contact with Osama bin Laden himself, and has been in Afghanistan and Bosnia," French Interior Minister Nicolas Sarkozy told parliament. "This individual is a specialist in computers and in radio

But according to the Reuters news agency, a judicial source close to the investigation contested the officials' account -- saying French prosecutors had no evidence of any close link between Ganczarski and bin Laden, founder of al Qaeda network. Authorities are now concentrating on Ganczarski’s possible role in the bombing of a synagogue in Djerba, Tunisia, last year that killed 21 tourists, including 14 Germans.

German police questioned Ganczarski last year about the Djerba attack after it was established he had telephoned with one of the suicide bombers shortly before the attack. He was detained but then later released when no direct involvement in the incident could be found. Shortly thereafter he moved to Saudi Arabia.

Although during his time in training camps in Afghanistan he was known as “Ibrahim the German,” Ganczarski is of Polish descent. Born in southern Poland in 1966, he later moved to Germany with his parents and became a naturalized citizen. He and his wife are converts to Islam. Trained as a locksmith, he eventually became know as a “computer expert” in extremist circles. 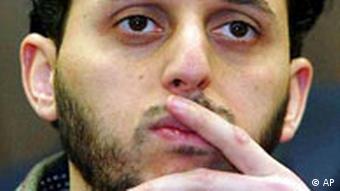 Germany has been a focal point for investigations into al Qaeda terrorist activity ever since it was discovered that several of the key figures in the Sept. 11, 2001, attacks in the United States had lived in Hamburg for years.

Ganczarski is suspected of having contact with the Moroccan Mounir El Motassadeq, a Hamburg resident who has been sentenced to 15 years in jail for supporting some of those involved in the attacks on New York and Washington.

Ganczarski also reportedly knows another Moroccan extremist named Karim Mehdi, who was detained at Charles de Gaulle on June 1. Mehdi, who has lived in Germany for years, was allegedly plotting attacks on the island of La Reunion in the Indian Ocean and against U.S. military bases in Germany. French authorities say he has alleged that Ganczarski also had a role in the planning of the attacks, though they never happened.

Tracing the Roots of Terror

A complete DW-WORLD dossier of coverage of Germany's investigations on terrorist activities related to al Qaeda and the Sept. 11 attacks.

U.S. and EU Reach Terrorism Accord

European justice ministers have agreed to sign a deal that will increase already close cooperation with the United States in the fight against terrorism. (June 10, 2003)

In its latest report on the state of global terror, Washington praises Berlin for its successful initiatives in fighting Islamic extremists and investigating the roots of the 9/11 Hamburg terror cell. (May 2, 2003)