Franco-era monument remains divisive for Spain | Europe | News and current affairs from around the continent | DW | 18.06.2011

In Spain, a monument conceived by dictator Francisco Franco is at the center of heated debate. The government wants to turn the "Valley of the Fallen" into a place of reconciliation, but achieving that aim won't be easy. 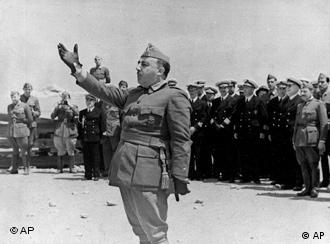 Franco continues to divide Spain past his death

Saturday morning at El Valle de los Caidos - the "Valley of the Fallen". Mass is held in a basilica at the dramatic monument built to commemorate those who died in the Spanish Civil War.

Outside, towering over the building where infamous dictator Francisco Franco is also buried, an enormous cross carved out of stone reaches some 40 meters into the air. Situated in a stunning wooded valley north of Madrid, few people other than tourists ever visit here, but the Valley of the Fallen is probably Spain's most controversial - and certainly largest - reminder of its dictatorship.

Three decades after the transition to democracy that followed Franco's death, the Socialist government intends now to turn the monument into a symbol of reconciliation between the two sides in the Civil War, which started in 1936 and ended in 1939.

Ramon Jauregui, a government minister, has set up a commission of experts to decide what should be done with the Valley of the Fallen. Their report is due in five months.

"It should be a place for everyone, not just a place for those on one side. This is in the spirit of our transition to democracy – respecting the fact there is a basilica there and a community of Benedictine monks," Jauregui told Deutsche Welle.

When work started on the monument at the end of the war, it was seen as a celebration of Franco's victory over the leftist Republic, a victory played out to the Francoist anthem, "Cara al sol." By the time it was finished, however, in 1958, the dictator presented the Valley of the Fallen as a monument to national unity. 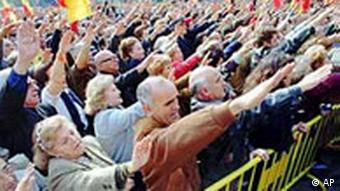 The appearance of the monument – including the huge cross and the Francoist eagle insignia – clearly evokes national Catholicism, the far-right, deeply religious ideology of the Civil War's victors.

The Spanish are divided over the monument, with some viewing it as a central aspect of Spanish tradition and others as a temple to Franco worthy of destruction.

The commission's toughest challenge will thus be to decide whether to leave the remains of Franco at the Valley of the Fallen, or to remove them and bury them elsewhere.

Franco's daughter has already said the body should stay where it is and one right-wing organization has even threatened to take the government to court if it exhumes the remains, epitomizing the sensitivity of the issue and the size of the task facing the government.

Jose Alvarez Junco, a history teacher at Madrid's Complutense University, was asked to be part of the commission tasked with deciding the future of the Valley of the Fallen, an invitation he rejected.

"I believe what the government intends with this monument utterly impossible to realize," Junco told Deutsche Welle. "It's comparable to converting the tomb of Lenin into a place of reconciliation. This is Francisco Franco, this is the dictator's tomb and it was built under the close direction of the dictator. The only way to alter the meaning of this place would be to demolish it."

Alvarez Junco said he thought the monument should not be destroyed, however, as many Spanish indeed do. He thinks that minor changes should be made - such as hanging plaques at the entrance - to remind people of the Republican POWs who helped construct it.

Over 30,000 Civil War combatants are buried near the site, thousands of them unidentified Republicans who fought against Franco. Under a historical memory law passed in 2007, Civil War mass graves around the country have been excavated, to give Franco's victims proper burials. The government insists that Republican remains at the Valley of the Fallen should also be exhumed and identified at the request of relatives, although experts have raised the impossibility of such an undertaking.

Several mass graves across Spain remain untouched. The current agonizing over what to do with the dictator's final resting place is for many a reflection of Spain's failure to face up to its violent past.

Francisco Galadi was shot and killed - along with the poet Federico Garcia Lorca - by Francoist troops at the beginning of the Civil War. The body of Galadi, like that of Lorca, was buried near Granada in southern Spain. Neither corpse, says Galadi's grandson Francisco, had yet been identified or properly buried.

"Here in Spain there's no political will on this issue, from the left or the right. If there was the necessary political will, all this would have been resolved. It's outrageous that in this day and age we are still in this situation. So it really means nothing to me when people mention the Valley of the Fallen to me. What I really want is to recover the remains of my grandfather."

Politics could indeed be an obstacle to resolving the Valley of the Fallen conundrum, as the Socialist government of Jose Luis Rodriguez Zapatero has little parliamentary support.

Moreover, there could be a general election later on this year, with the conservative Popular Party the widely recognized frontrunner. The Popular Party, however, has criticized the Socialists' focus on historical memory, raising the chances that the commission's report on Franco's tomb will end up in a drawer, gathering dust.