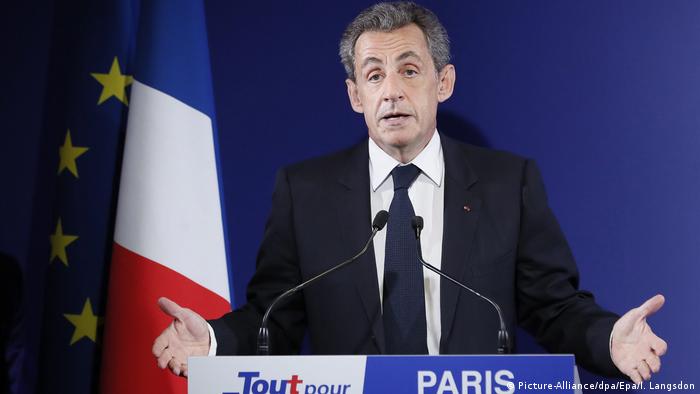 One year since attacks, a grimmer France commemorates its victims

As France commemorates its deadliest terror attack in recent history on Sunday, many remain traumatized. And there is widespread fear that more could be to come. (12.11.2016)

With more than 80 percent of polling stations reporting, Fillon had 44 percent, former Prime Minister Alain Juppe had 28.1 percent and Sarkozy had 21 percent.

Prior to the final results, Sarkozy admitted defeat on Sunday, saying he would back Fillon in the event of a run-off vote.

"I hold Alain Juppe in high esteem, but I feel closer to Francois Fillon's political choices," Sarkozy told supporters. "I will therefore vote for him in the second round of the primary," he said.

"I have no bitterness, no sadness, and I wish all the best for my country, for you my fellow citizens, and for the one who will lead this country I love so much," he added.

Fillon served as Sarkozy's prime minister from 2007 - 2012 and is a social conservative with economically liberal ideas. Until one week ago, the 62-year-old Fillon trailed behind Juppe and Sarkozy badly in the polls and was not expected to go through to the second round of the primaries.

If Fillon does not receive more than 50 percent of the vote, he and Juppe will face off in a run-off vote on Sunday November 27.

The surprise vote for Britain to leave the EU this summer and Donald Trump's victory in the US election has served as a wake-up call in France, upending long-held assumptions and triggering fears, and hopes, that next spring's election will deliver a similar upset.

The chances of France's far-right leader Marine Le Pen running for, and possibly winning, the French presidency in May 2017 have also apparently been boosted by Trump's US election success.

The National Front (FN) leader hopes that her anti-immigrant, anti-Muslim and anti-establishment platform could propel her into the presidency.

Previous polls consistently showed Juppe easily beating Le Pen next May, but there have not been any surveys on how Fillon would fare in such a race.

Juppe has struck a more moderate campaign tone, criticizing what he has called an unreasonable level of hysteria over the question of Islam in France.

It was the conservative party's first ever primary vote and a resounding humiliation for Sarkozy - who tried to woo voters tempted by FN with a populist campaign and tough stances on immigration, security and national identity.

It was not immediately clear whether or not the influence of left-wing voters - who were also able to vote in the conservative primary on Sunday - was behind Sarkozy's ousting. Left-wing voters were allowed to pay two euros ($2.10) at polling stations to sign a declaration that they subscribe to the "values of the center and the right" to vote in the right-wing primary.

The eventual conservative nominee is predicted to face off against Le Pen and take the presidency from France's divided Socialists, whose popularity has significantly declined under President Francois Hollande.

Hollande has yet to announce whether he will run again for president in the May elections. His former Economy Minister Emmanuel Macron announced on Wednesday he would be running as an independent candidate.