Jean-Marie Le Pen has refused to attend a disciplinary meeting of the far-right National Front. The executive meeting was intended to possibly sanction the aging party founder for a series of anti-Semitic public remarks. 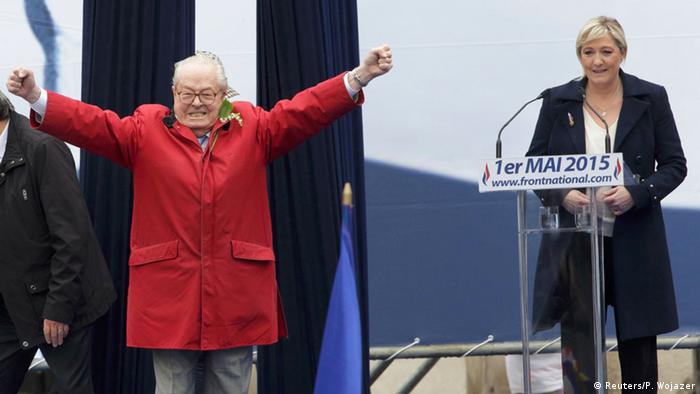 Saying he found it beneath him to appear, the founder of France's far-right National Front (FN), Jean-Marie Le Pen, refused to attend an executive board meeting Monday. The purpose of the meeting was to decide whether to sanction the party's 86-year-old rabble-rouser over his anti-Semitic remarks.

Ahead of the decision, a broader meeting of the party on Monday declared that it "disapproves the comments made and reiterated by Jean-Marie Le Pen," while confirming its unwavering support of his daughter Marine, who has led the party since 2011.

The executive board later voted to suspend his membership and will hold a party meeting in three months to decide whether or not to also strip Le Pen of his title of honorary chairman.

The elder Le Pen, who spent four decades shaping the anti-immigration fringe party into a true political force, had made comments in the past minimizing the importance of the Holocaust and praising Philippe Petain, France's wartime leader who collaborated with the Nazis.

Jean-Marie refuses to back down

Coming out of the wider party meeting Monday, Jean-Marie Le Pen refused to back down, saying he had been "repudiated" and would not attend the meeting of the executive bureau of which he is a member. "The founding president of the National Front considers it undignified to appear," he told iTele TV.

He also told reporters that if FN wants him to retire, "they'll have to kill me."

On Sunday, Marine Le Pen escalated the rhetoric of the high-stakes family feud, saying "Jean-Marie Le Pen should no longer be able to talk in the name of the National Front; his comments are against the fixed (party) line."

Since taking over the reins, the younger Le Pen has worked to transform the party from political pariah to a more voter-friendly political alternative to established parties, seeing gains in local and regional elections in recent years with an eye on the presidential campaign in 2017.

The founder of France's far-right National Front, Jean-Marie Le Pen, has been hospitalized amid a bitter family feud with the party chief - his daughter Marine. The 86-year-old says he suffered a "small heart problem." (16.04.2015)