Founder of France's National Front (FN), Jean-Marie Le Pen has said he is pulling out of regional elections. The move follows a fierce public fracas with his daughter and current leader of the far-right party, Marine. 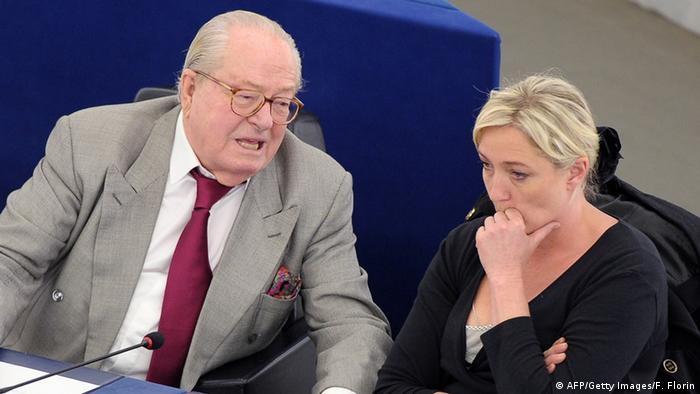 Le Pen said in Monday's edition of the conservative French newspaper "Le Figaro" that he would not be standing for FN in France's south-east Provence-Alpes-Côte d'Azur region.

In a parting shot to his daughter Marine, however, Le Pen told the French daily: "If she accepts, I think she would head a very good list [of candidates].

"She is certainly the best, I am not going to say after me, but she is," Le Pen said.

The war of words between father and daughter ensued after Le Pen repeatedly declared that the Nazi gas chambers, used at concentration camps during the Holocaust, were a "detail of history."

The 86-year-old followed up the assertion with a defense of France's World War II leader Philippe Petain, who collaborated with the Nazis.

In response to the remarks, FN leader, Marine, who has been trying to clean up the party's racist and anti-Semitic image ahead of the 2017 presidential election, accused her father of committing "political suicide," saying she would oppose his candidacy in regional elections.

In a statement released last Wednesday, the younger Le Pen said her father's status as honorary president "does not give him the right to hijack the National Front with vulgar provocations, seemingly designed to damage me, but which unfortunately hit the whole movement."

Asked by the Figaro who should stand in his place, Le Pen gave his approval to his 25-year-old granddaughter and rising star among FN members, Marion Marechal-Le Pen, who is known to have social views considered more conservative than Marine's.

French voters are going to the polls to choose thousands of local councilors in run-off elections. The vote is being seen as a barometer of the far-right National Front's growing popularity. (29.03.2015)