France′s Chirac to be tried for embezzlement over ′ghost jobs′ | Europe | News and current affairs from around the continent | DW | 30.10.2009

France's Chirac to be tried for embezzlement over 'ghost jobs'

Former president of France Jacques Chirac will have to face the courts on charges of embezzlement. Such a move is unprecedented against a former French head of state. 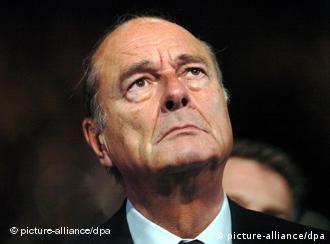 Former French president Jacques Chirac has been ordered to stand trial for embezzlement by a French magistrate.

Chirac, 76, is accused of creating 21 contracts for fake jobs during his tenure as the mayor of Paris between 1977 and 1995.

The contracts were allegedly awarded to Chirac's political allies and paid out of the city's coffers to the tune of 4.5 million euros ($6.68 million).

Chirac was immune from prosecution during the 12 years he was France's president but allegations of corruption surfaced as soon as he stepped down in 2007.

A statement from his office said that Chirac and nine others were charged with the crime, but that he was "calm and determined" to prove that the jobs were not fake.

Popularity on the rise

The allegations come at a time when Chirac is celebrating a renewed popularity among his former constituents. An lfop poll said his approval rating was 76 percent, a stark contrast to that of his successor Nicolas Sarkozy, whose rating was only 44 percent.

Since retiring from politics, Chirac has launched a charitable foundation and written a memoir to be published next month capitalizing on the nostalgia for his administration.

In political circles, the French elite seem to be torn between embarrassment and solidarity.

"These are old stories and, today, Jacques Chirac probably has lots of things on his conscience but at the same time he has given a lot to the country," said Segolene Royal, a former presidential candidate from the Socialist Party, Chirac's political opponents.

"He deserves to be left alone, but justice must be the same for everyone ... Even if he deserves this, it's not good for France's image," she said on Europe 1 radio.

"Angolagate": Corruption at the highest levels of French politics

Former French Interior Minister Charles Pasqua, sentenced to a year in prison for his role in an Angolan arms-trafficking scandal, appears determined to take leading French politicians of the 1990s down with him. (29.10.2009)

A French court on Wednesday, Nov. 21, decided to place former President Jacques Chirac under formal investigation for embezzlement of public funds during his time as mayor of Paris. (22.11.2007)

Nicolas Sarkozy took over as French president from Jacques Chirac on Wednesday, vowing to usher in a period of deep reforms to help his country adapt to a fast-changing world. (16.05.2007)