Paris will not put pressure on Berlin to change its plans for the Nord Stream 2 Pipeline, the French foreign minister said. Previously, a junior French minister said Europe should consider stopping the project. 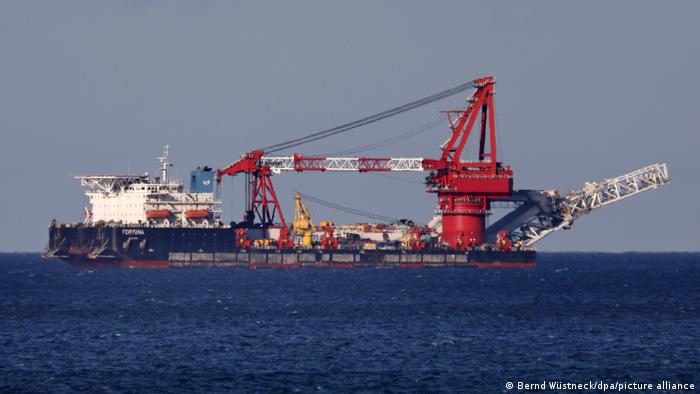 The controversial Nord Stream 2 gas pipeline is close to complete

France will not put pressure on Germany to change its plans for the Nord Stream 2 Pipeline to send more Russian gas to Europe, Foreign Minister Jean-Yves Le Drian said in an interview with Europe 1 radio on Wednesday.

A junior French minister said this week that Europe should consider stopping the project over Russia's actions towards Kremlin critic Alexei Navalny and the jailing of his supporters.

However, Le Drian said that it was not for Paris to meddle in Berlin's decisions on the controversial pipeline.

"We shouldn't mix up subjects," he said, when asked whether the pipeline project would be scrapped. "We have had discussions with the Germans on Nord Stream, but that's mostly related to European energy sovereignty."

"Nord Stream 2 and the second line of Turk Stream are designed to increase Russia's leverage over our allies and partners, and they undermine transatlantic security," State Department spokesperson Ned Price told the media.

Price said the US would continue to monitor construction of the pipeline.

"We will monitor activity to complete or certify the pipeline, and if such activity takes place we will make a determination on the applicability of sanctions," Price said.

Le Drian: It's 'up to the Germans'

Despite the Navalny poisoning scandal, the conflict in Ukraine, and the security concerns of overdependence on Russia, German Chancellor Angela Merkel has continued to back the pipeline.

Any decision to abandon the project would be "up to the Germans," Le Drian said. "I'm not going to meddle in Germany's energy choices."

He noted that there would be a "calm, loyal and frank discussion" on the topic with Berlin officials.

Commenting on the jailing of Navalny, Le Drian said Russia was taking an authoritarian turn and that the European Union would consider how to react after EU Minister of Foreign Affairs Josep Borrell returned from a trip to Moscow later this week.

Meanwhile, conservative German parliamentarian Andreas Nick called on Germany and Europe to consider all options to "exert maximum pressure"  on Russia in response to Moscow's treatment of Alexei Navalny.

Nick told DW that an exclusive focus on the Nord Stream gas pipeline project would, however, be too narrow, too bilateral and too costly, as halting the project could trigger billions of dollars in damage payments.

“I think for this debate to be honest and meaningful, everything has to be on the table,” Nick told DW. “It is not about bilateralizing this into a German-Russian issue."

On Tuesday, Navalny was sentenced to 3 ½ years in a penal colony for violating his probation terms relating to a 2014 embezzlement case. The outspoken Kremlin critic called the trial an attempt to "intimidate" the public.

Pro-Navalny demonstrations which took place across Russia have resulted in record numbers of arrests in recent weeks.