France will host the experimental ITER nuclear fusion reactor, a multi-billion-euro project designed to emulate the sun's power, the six partners in the project agreed in Moscow on Tuesday, after Japan withdrew its bid. 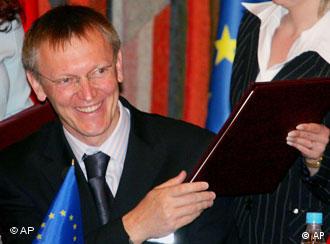 The construction of the International Thermonuclear Experimental Reactor (ITER) will be a little like trying to build a star on earth. The technology is daunting, but if it works, scientists say the world will benefit from a source of energy that will be cheap, clean, safe and almost infinite.

For years, the six ITER partners -- the EU, the United States, Russia, Japan, South Korea and China -- had wrangled over which country would get to host the 10-billion-euro ($12 billion) project. They finally reached an agreement after Japan withdrew its bid, settling on Moscow and Beijing's preferred site, Cadarache, France.

"Today we are making history in terms of international scientific cooperation," said Janez Potocnik, the EU's science and research commissioner, at a ceremony in Moscow. "After long and difficult negotiations, the six parties... have decided that ITER should be located at the site proposed by the European Union -- Cadarache in southern France." 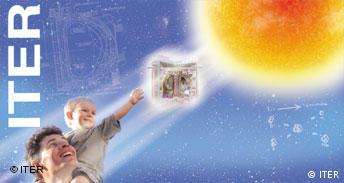 Under Tuesday's agreement, 50 percent of the cost of the project will be paid by the EU, with the rest shared out between the five other partners.

"We managed to secure a status that amounts to being a secondary host of the project... This and other conditions should allow us to preserve our national interests completely," Nakayama said in a statement.

Recreating the power of the sun

Instead of splitting the atom -- the principle behind current nuclear plants -- ITER seeks to harness nuclear fusion: the power of the sun and the stars.

ITER was conceived at an international summit in 1985 as a test bench to see whether fusion can be taken out of the lab and help meet the world's energy needs from the middle of the 21st century.

The science behind the project presents an immense technological challenge, since fusing together atomic nuclei will require a gas field heated to 100 million degrees inside an intense magnetic field.

But the result, scientists hope, will be a plentiful energy supply that will compensate for diminishing reserves of oil, coal and natural gas. One of the hydrogen isotopes needed to fuel the process is found in water while the other can be man-made. 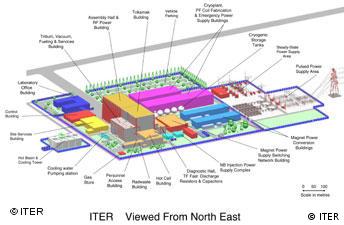 Proponents of the project have said it will create hundreds of jobs in southern France and boost the region's economy. But French environmental groups slammed the project Tuesday, saying it was "dangerous," "costly," and "not a job generator."

"We are against the project because it's very dangerous and will not create jobs in the region," the head of the Mediane environmental group, Jean Marcon, said.

An umbrella association including Mediane and other groups, Sortir du Nucleaire (Get Out of Nuclear Energy), also claimed that ITER was a hazard because scientists did not yet know how to manipulate the high-energy deuterium and tritium hydrogen isotopes used in the fusion process.

The environmentalists highlighted a warning from Masatoshi Koshiba, a Japanese scientist who won the Nobel Prize for Physics in 2002, that ITER did not meet "a certain number of conditions, namely safety and economic costs" for it to be considered the dream energy of the future.

The environmental group Greenpeace said that if ITER is to yield any results at all, it will not be until the second half of this century.

"At a time when it is universally recognised that we must reduce greenhouse gas emissions by 2050, Greenpeace considers it ridiculous to use resources and billions of euros on this project," it said.

Construction to take at least a decade

The construction program is expected to take around 10 years at a cost of 4.6 billion euros, though some scientists have said it could take three times as long. Once the reactor is ready, experiments would begin and continue for some 20 years, testing ITER for technological feasibility, safety, health and waste management. 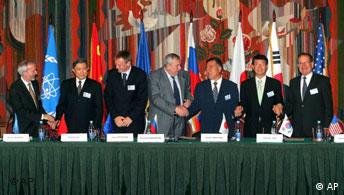 If this experimental machine is successful, a demo fusion power plant would be built and -- if all goes well -- the first commercial fusion plant would be created mid-century.

French President Jacques Chirac thanked the member countries of the EU, as well as Russia and China who lent their support to the French bid.

"It is a big success for France, for Europe and for all the partners of ITER," Chirac said.

A Rebirth for German Nuclear Energy?

The prospect of victory by Germany's conservative opposition in an early general election has shaken up the country's energy sector. The nuclear power industry is hoping to slow the planned phase out atomic energy. (May 25, 2005)

Drivers in Berlin can fill up their cars with hydrogen at the world's largest service station for fuel cell vehicles. Opened on Friday, the project paves the way for widespread use of alternative energy. (Nov. 13, 2004)