French President Francois Hollande has led a ceremony in Nice to commemorate the victims of the Bastille Day attack that killed 86 people. The commemoration comes on the three-month anniversary. 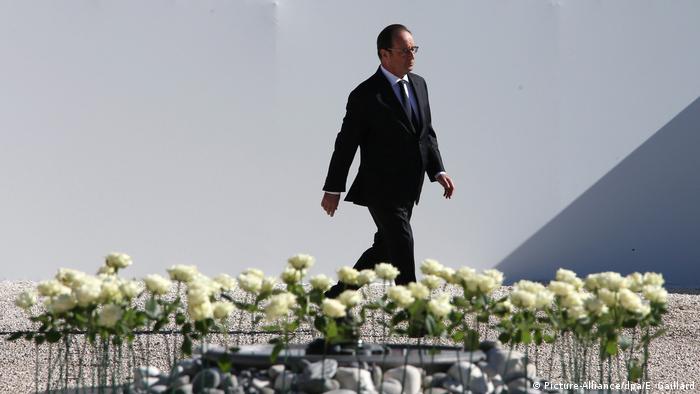 Pope Francis has met individually with the relatives and friends of the 86 victims of the Bastille Day truck attack in Nice, France. He has urged them to not "respond to hatred with hatred and to violence with violence." (24.09.2016)

Around 1,500 people turned out on a sunny autumn day - about half directly affected by the attack in which a Tunisian-born Frenchman deliberately drove his 19-ton truck through a thick holiday crowd.

"It's national unity that has been hit on July 14. That's the monstrous target of the terrorists," Hollande said. "Hitting some to scare the others, unleashing violence to create division, instilling fear to fuel distrust and stigmatization. This evil project will fail. Unity, liberty, humanity, in the end, will prevail."

The names of the 86 victims - of 19 different nationalities - were read and 86 white roses placed on the center of the ceremony square. Cindy Pellegrini, recalled France's ideal of "liberty, equality, fraternity," as she mourned the loss of six members of her family in the attack. "Our sadness is undefinable," she said. "How to live with physical wounds? How to live with moral wounds?" 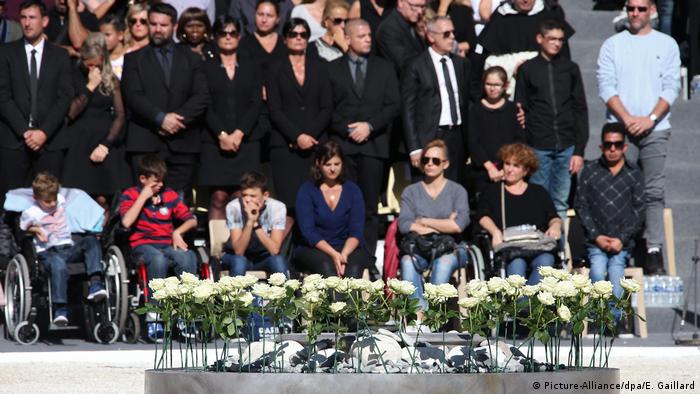 Tunisian-born Mohamed Lahouaiej Bouhlel plowed a delivery truck into crowds gathered to see Bastille Day fireworks along the city's seaside promenade. The Islamic State militant group claimed responsibility, but investigators have not found a definitive link between Bouhlel and the group.

An open wound in French society

Flowers, teddy bears and flags of various nations were floating on a makeshift memorial near the Promenade des Anglais that was closed to the general public. The massacre was among the worst in a string of jihadist attacks over the past two years that have ramped up security fears while stoking anti-immigrant sentiment in the run-up to presidential elections next year.

France's Socialist government came under fire for alleged security lapses ahead of the attack in Nice, a bastion of the right-wing opposition, as critics pointed to an insufficient police presence despite the state of emergency in place since the attacks that claimed 130 lives in Paris on November 13, 2015.

The attack also exacerbated tensions in French society, felt particularly by the country's 4-million-strong Muslim community -- the largest in Europe. Several municipalities went on to forbid the wearing of Burkini swimwear, before the controversial ban was reversed by France's highest court.