Protesters apparently outraged by caricatures of the Prophet Muhammad, published in Charlie Hebdo's first edition since the Paris attacks, have set fire to the French cultural center and three churches in Zinder, Niger. 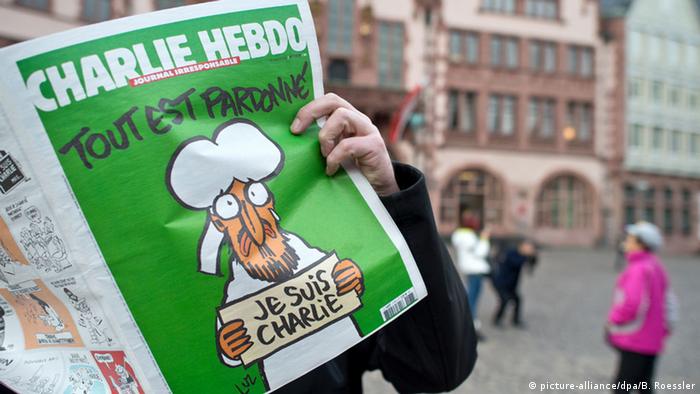 Four people were killed and 45 injured in Zinder on Friday during protests against the French satirical magazine's publication of a cartoon showing the Prophet Muhammad, the interior ministry said.

Interior Minister Massaoudou Hassoumi said a policeman and three civilians were killed in the demonstrations, in which the French cultural center and three churches were burned down. At least 40 other people were injured in the riots.

A crowd of around 50 people smashed the French center's entrance door and set fire to the cafeteria, library and offices in spite of warning shots fired by two police guards, center director Kaoumi Bawa told the AFP news agency.

A Catholic church and two Protestant churches were also ransacked, authorities in Zinder, which is in the south of the country near the border with Nigeria. "We've never seen that in living memory in Zinder," an administration official said. "It's a black Friday."

Amadou Mamane, a report in Zinder at the time of the riots, described how "a human wave" vented its anger on the streets of Zinder, "to protest against the caricature of Mohammed. They were mostly young people."

Protests against Charlie Hebdo cartoons have turned violent in Pakistan. Experts say the controversy surrounding the magazine will likely embolden extremists in the country and shrink the space for secular people.

The Charlie Hebdo killings have cast a long shadow over Europe, intensifying debates over the integration of Muslim communities and also the issue of providing asylum to refugees. (16.01.2015)

In Zinder, Niger, industrial bakeries are taking over, leaving artisanal bakeries fighting for survival. These smaller bakeries now have to be strategic when it comes to supplying customers and boosting profits.