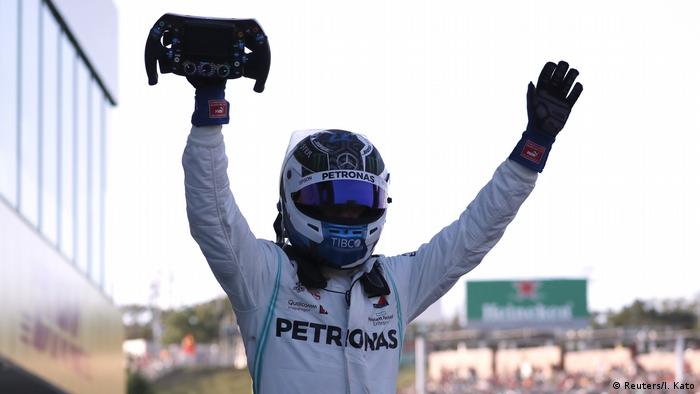 Valtteri Bottas captured the chequered flag at the end of an action-packed Japanese Grand Prix for his third race win of the season as Mercedes celebrated clinching a sixth-straight constructors' title.

"I'm really proud to be part of the team, a sixth title in a row is so impressive and I'm proud of every team member here at the race well done guys and girls," said the Finnish driver after his first-ever win at Suzuka.

Teammate Lewis Hamilton whose switch from a one-stop to a two-stop strategy cost him a chance of claiming his tenth win of the season in Japan. "There's been so much hard work over the year and the last seven years," said the Brit. "The team have done an amazing job and I’m really proud to be part of it and able to contribute... I hope everyone is having some champagne today."

Tough day at the office for Vettel

A turmultuous weekend had been shaping up for a positve end for Ferrari after Sebastian Vettel and Charles Leclerc had taken a one-two in the day's earlier qualifying — put back to Sunday as a result of Typhoon Hagibis. However, a false start by Vettel and an early clash between Leclerc and Red Bull's Max Verstappen allowed Bottas to overtake the Ferrari duo and roar into the lead at Suzuka. 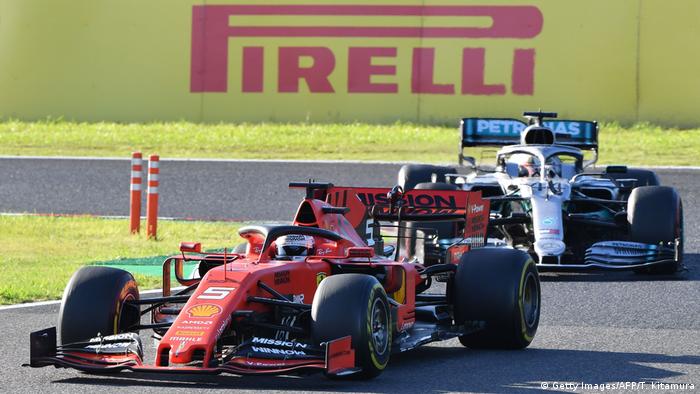 Sebastian Vettel started on pole, but end up having to defend P2 at the Japanese Grand Prix.

"The lights were on a long time, so it was my mistake," admitted Vettel after the race. "I lost the momentum. It was a really poor start. Mercedes were quite fast in the race, Valtteri Bottas was flying at the end of the first stint, Lewis tried to do one stop and it didn't work."

Thanks to Ferrari's pace on the straights, the German driver defended second place valiantly under relentless pressure from Hamilton in the closing stages of the race.

"I just tried to get good exits where he could be a threat, but a tough afternoon to maintain second," he continued. "With the lack of pace, second is probably the maximum but I'm not happy with the very first start of the race. To get pole and second is a reasonable day."

While Mercedes wrapped up the constructers' title for a sixth-straight season, the result in Suzuka also guaranteed that either Bottas or Hamilton will claim the driver's championships when the campaign concludes on December 1. Hamilton, the reigning title holder, currently boasts a 64-point lead at the top of the standings and could claim his sixth world championship title at the Mexican GP in two weeks.

Happy days in the Mercedes camp

Mercedes' radio: "Yes Valtteri, you are the man!"

Valtteri Bottas claims his third race win of the season becoming only the third Mercedes driver to win at the Japanese Grand Prix. Hamilton fails to get past Vettel but claims a bonus point for the fastest lap at Suzuka.

Perez is off the tarmac on Turn 1 as he enters his final lap.

Hamilton's tires are shot and it doesn't look like he's going to mount a serious challenge unless Vettel makes a mistake.

There will be no catching Bottas now, but how many more goes is Hamilton going to get at Vettel. "I need more power," says Hamilton.

Vettel's tires don't look to be in the best condition. Hamilton attacks on the outside, but is closed down by the German.

This is shaping up to get tasty between Vettel and Hamilton.

Five laps to go as Bottas laps Leclerc leaving just five cars within a lap of each other. Elsewhere, Hamilton's patience is being tested by Vettel who is defending P2 well.

The big discussion on Sky Sports Germany is whether Hamilton had to pit for a second time. His tires appeared to be holding up well and there are other drivers who went longer on the same set. The Brit is about to get DRS having just set a new fastest lap.

Vettel's doesn't have any breathing room left as Hamilton moves to within a second of the Ferrari driver.

Hamilton is quickly closing the gap on Vettel. The gap is below 3 seconds.

Leclerc is told the reason behind another pit is "tire life and fastest lap."

Hamilton is into the pits and has moved onto the softs in a bid to win the race as he exits five second behind Vettel. A strange decision?

Mercedes need to outscore Ferrari by 14 points to clinch the constructors' championship at Suzuka. 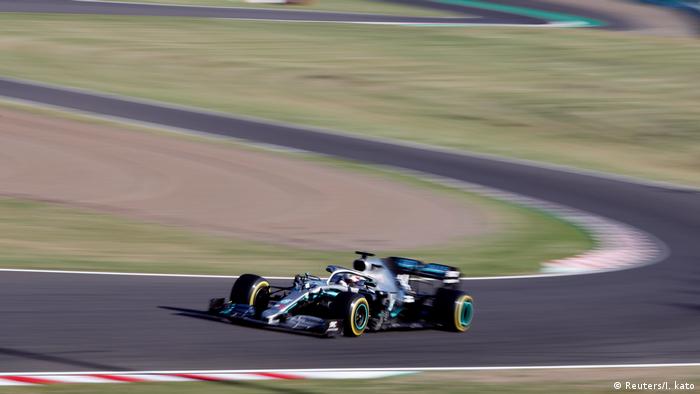 Lewis Hamilton is chasing his tenth win of the season at the Japanese Grand Prix.

Radio: "You've got Lewis ahead of you, who still has to stop."

Bottas: "Are you sure he's going to stop?"

Radio: "I can confirm, he will stop."

Hamilton: "Tell me what I need to do to win this race." He's got a ten second lead at present.

In the meantime, Leclerc has climbed all the way up to sixth. The investigation into the clash with Verstappen will take place once the race concludes in Suzuka.

Bottas does indeed pit for a second time as Hamilton takes the race lead. Bottas exits ahead of Vettel so we've still got a Mercedes' one-two which would clinch the constructors' championship today.

Vettel has taken a significant chunk of time out of Hamilton's lead over him having moved onto fresher tires.

Oh dear! Hulkenberg has just let his team know that his seat is loose.

Hamilton tells his team that his "tires are good", but that he's "in traffic now". Bottas is expected to pit for a second time.

We're back to having a Mercedes one-two.

Ferrari teammate Leclerc is now up into 9th as Vettel comes into the pits. It's a quick one, but he still trails Hamilton as he exits.

Vettel is also on the hunt: "Bottas lap time is dropping, is it real or fake?"

The consensus is that MErcedes have potentially cost Hamilton any chance of winning this race by opting to put him on the mediums. Over the team radio there's a quippy exchange as Hamilton asks: "Am I meant to be closing the gap?". The response: "You're doing that already Lewis." Maybe all is not lost with Vettel and Bottas still to pit.

Charles Leclerc goes into the pits for a second time to move onto the softs. He's down in 11th right now behind Perez, but will be looking to attack.

A lovely move from Hulkenberg sees his fly past Norris on the inside as he moves into 11th.

Lewis Hamilton is not a happy bunny. "Why have I lost so much time? Can you explain this to me? Why didn't you put me on the hards. I basically out of this race." The response is that degredation of the tires is high and has a "better chance on these tires".

Further back, Albon has taken Ricciardo to move back into fifth place, trailing Sainz by just under 12 seconds.

Hamilton goes into the pits for his one-stop and sticks with the medium tires. Bottas takes the race lead as Hamilton comes out trailing Vettel by 22 seconds.

Vettel has now move past Sainz into third. Meanwhile, over the Mercedes' radio, Bottas is told: "You need to push. You're on a two-stop, Lewis is on a one-stop."

Having started the race with a Ferrari one-two it's now Mercedes who find themselves at Suzuka. If it stays this way they will clinch the constructors' title.

Vettel darts into the pits to change to the soft tires and comes back out onto the course in 4th palce behind Sainz, who hasn't been in the top four all season.

Verstappen is forced to retire. A rough weekend for the Red Bull driver.

A ruling on the flase start from Vettel, who will not get a penalty. He did hit the pedal early, but then stopped again which is what cost him pole position. He's now got Hamilton hot on his heels.

Leclerc is moving up the pack having gone past Kvyat, Raikonnen and Grosjean to sit in 12th. 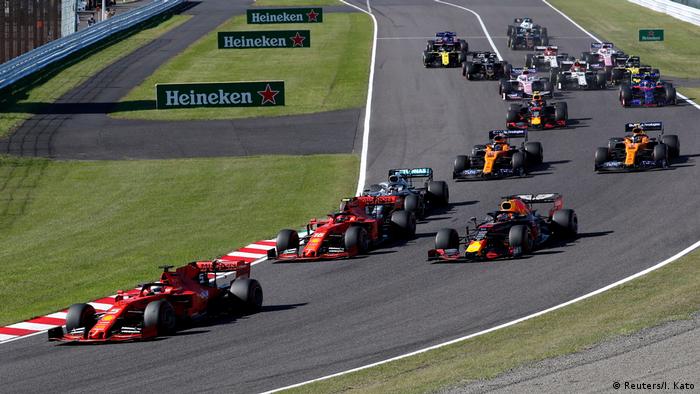 Max Verstappen tries attack on the outside of Turn 2 before getting clipped by Charles Leclerc.

Some of the onboard replays have suggested Vettel did move before the lights were out and the stewards are now investigating.

A look at the clash between Verstappen and Leclerc, who is driving with just one wing mirror at present.

Meanwhile at the front of the pack, Vettel is currently in a Mercedes sandwich with between race leader Bottas and Hamilton. Bottas won two of the first four races this season, but hasn't won since.

The interesting thing about how all this has shaped up is that, after coming together on turn two, Verstappen and Leclerc are set to tangle in 16th and 17th. As I write that, Leclerc goes past the Red Bull driver who looks to be having trouble with his car.

After all the drama at the start, there was also a coming together between Albon and Norris which forced the latter into the pits before joining the race in last.

Bottas now has a two second lead over Vettel, but replays show the two drivers may both have jumped early.

Vertsappen isn't happy! "Where should I go?? He just came straight for my car!"

Leclerc has now headed into the pits and is out in under 10 seconds. Meanwhile, race control has ruled that it won't investigate the clash with Verstappen. It looked like the 21-year-old lost grip on the inside.

Leclerc is on the team radio and has said that "the car feels fine" after the clash with Verstappen.

Bottas has already marched into a lead of almost two seconds ahead of the Ferrari duo after that sensational start. Vettel will not be happy after that horrid start and will have been wanting to hold onto pole for longer.

Verstappen spins out! Heading into the second corner the Red Bull driver was also trying to move up after a fast start only to get clipped by Charles Leclerc and sent into the gravel.

Lights out at Suzuka!

We're off and and there's drama from the off as Sebastian Vettel makes a slow start allowing Valtteri Bottas to take him on thwe outside.

During qualifying both Robert Kubica and Kevin Magnussen walked away from crashes on Turn 18.

Vettel didn't just claim pole with a stunning qualifying lap, he did it with a Suzuka track record!

The first green light of the day!

The Japanese Grand Prix had been under threat due to Typhoon Hagibis, but the race at Suzuka has been given the go ahead and with qualifying wrapped up, the tires will take to the tarmac once again shortly. For the first time since Montreal in June, Sebastian Vettel will look to defend pole and the question is whether he can hold off the challenge of fellow Ferrari driver Charles Leclerc and the two trailing Mercedes' drivers Lewis Hamilton and Valtteri Bottas?