Former Siemens boss agrees to damages | Germany | News and in-depth reporting from Berlin and beyond | DW | 02.12.2009 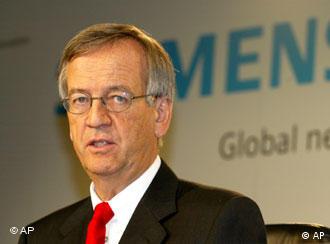 The electronics and engineering giant Siemens has reached a deal with its former chief executive over costs incurred as a result of a major corruption case.

Heinrich von Pierer and other senior managers had repeatedly rejected Siemens' demands for a settlement. The company threatened them with legal action if an agreement was not reached by mid-November.

In a sudden change of heart, Pierer agreed on Wednesday to pay Siemens five million euros in damages, less than the six million for which it had asked.

Pierer was chairman of Siemens' supervisory board when the bribery scandal broke in November 2006. He previously served for thirteen years as the company's chief executive.

He resigned in April 2007 as the scale of the corruption within the firm began to become apparent. Pierer admitted at the time that he carried "political responsibility," but denied any personal involvement.

During the investigation it emerged that over a number of years Siemens had created a system of slush funds and fictitious consultancy contracts. It had also paid huge bribes, totalling at least 1.3 billion euros, in order to win foreign contracts. 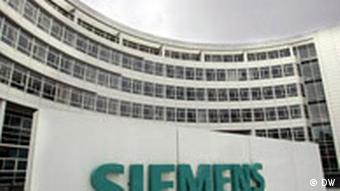 Pierer himself was not accused of any crime. However, the new Siemens board claimed damages from eleven of the company's former bosses, accusing them of neglecting their supervisory duties and failing to stop illegal practices.

Pierer's lawyers stress that the settlement reached with Siemens is not an admission of personal culpability, and that a statement to this effect is included in the agreement.

Five other former senior managers also reached settlements with Siemens on Wednesday: Klaus Kleinfeld, who succeeded Pierer as chief executive in 2005, former board members Uriel Sharef, Johannes Feldmayer and Juergen Radomski, and the former chairman of the supervisory board, Karl Hermann Baumann. They agreed to pay damages of between one and four million euros each.

The current chief executive, Peter Loescher, expressed his satisfaction in a letter to Siemens employees. He said that the agreement would "avoid long-drawn-out and troublesome legal proceedings for all concerned."

"Not everyone was prepared to admit or understand that our actions were subject to legal imperatives, and that responsibility must be taken at all levels for what occurred," Loescher wrote.

Siemens to pay $100 million to fight graft under scandal settlement

German industrial giant Siemens has been dealt further punishment for bribery at its subsidiaries and must now pay $100 million (71 million euros) into a global anti-corruption fund, said the World Bank. (02.07.2009)

Opinion: Siemens got off lightly, but there's more to come

New probe against Austria's Chancellor Kurz, this time for corruption 06.10.2021

Austrian Chancellor Sebastian Kurz is under investigation for media bribery, prosecutors say. His offices and party headquarters were subjected to morning raids by investigators seeking evidence.

A global media investigation dubbed Suisse Secrets has revealed that Switzerland's second-largest bank failed to crack down on illicit funds passing through accounts held by dictators, criminals and corrupt politicians.