Charles Sirleaf, son of ex-president Ellen Johnson Sirleaf, is one of five people facing charges following the release of reports detailing widespread alleged malpractice at the Central Bank of Liberia. 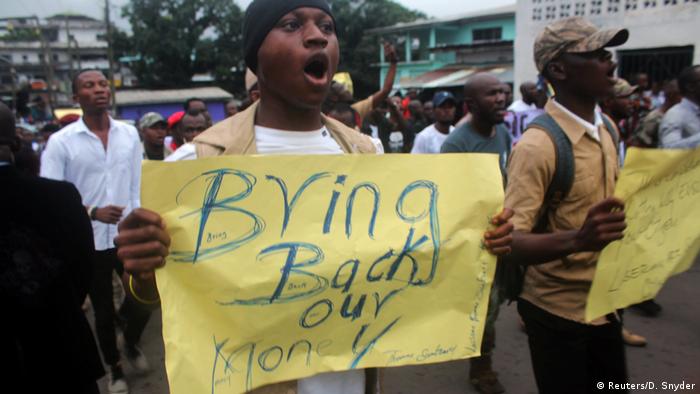 Sirleaf was a deputy governor of the institution during the period when the bank notes were illegally ordered. He was arrested along with two central bank colleagues on Thursday. He has denied any wrongdoing.

The director of banking, Dorbor Hagba, was also arrested on Thursday, while Milton Weeks - central bank governor until he stepped down when President George Weah took office in January 2018 - surrendered to police the next day.

Two other men, named as accomplices, have been evading arrest, according to police. The death of a former senior central bank official on Saturday attracted further public interest in the case. Matthew J. Innis, the institution's one-time deputy director for micro-finance in the regulation and supervision division, was reportedly killed in a hit-and-run road incident.

The American aid agency USAID and the Liberian government funded the investigations which were launched last year in October following the suspected disappearance of newly printed notes worth $100 million (€88 million) destined for the Liberian central bank - the equivalent of around 5 percent of the West African nation's gross domestic product.

A London-based firm, Kroll, was hired to carry out the audit. The supposed disappearance led to a travel departure ban on 15 people, including Charles Sirleaf.

"Kroll has identified discrepancies at every stage of the process for controlling the movement of banknotes into and out of the (central bank)," the risk consultancy said in its report that had been commissioned by the United States at the request of the Liberian government.

A Liberian government report found that notes worth $16.5 million remained unaccounted for and said the bank's management "deviated from conventional best practices."

In 2016, Liberia's House of Representatives passed a resolution approving the printing of 5 billion Liberian dollars (US$31 million; €27 million).

The Central Bank requested an additional 10 billion Liberian dollars but the request was denied by the Senate. The bank engaged a company to print the additional banknotes anyway.

"This raised the risk of unintended negative economic effect, including high inflation and the rapid depreciation" of the Liberian dollar, the report said.

Kroll said its investigation found no evidence of a large shipment of cash going missing as had been reported by local media. Instead, the new bank notes all arrived from a Swedish company but the central bank then failed to properly track what was done with them, the report said.

The report said most of the bank notes are believed to have been put into circulation without authorities removing and destroying the old bills they were designed to replace.

Anderson Miamen, executive director of CENTAL in Liberia, believes that the money went into the pockets of individuals: "It means the money was misapplied, and misapplication means converting property that is not yours into your personal benefit."

"If the money isn't available and there is no record of the money  being infused into the economy, it means it has to be somewhere.

"And that somewhere would be in private accounts of individuals connected to the process."

The report said officials at the central bank were unable to explain who approved the injection of new bank notes without removing the old ones or how the money was infused into the Liberian economy.

"Many Liberians were anxious about this report and have been disappointed since this news broke about the missing 16 billion Liberian dollars."

Several organizations have been pressuring the government to ensure that concrete actions come from this investigation, he told DW.

Critics of President George Weah's government have accused his administration of having had a hand in the poor handling of the bank notes for their personal gain, an allegation they have denied.

Miamen underlined that the malpractice is, first of all, a failure of the government.

"But it is also the failure of the oversight body or the internal control system of the bank." 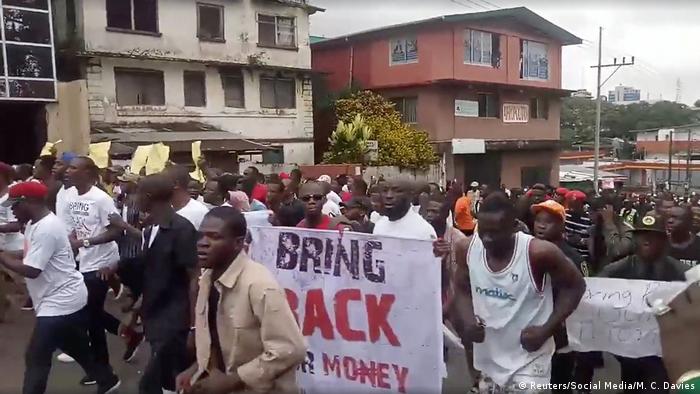 He believes that the problem lies with how Liberia is dealing with impunity: "I can point to the lack of action on or against individuals who [...] abuse their power."

"What needs to happen is to address impunity on a broader level in this country."

"The second thing is if institutions or the different agencies were effectively playing their role, if internal controls system were actually exercising their responsibility and doing due diligence, we would have probably not gotten to this point," he said.

Not the first Sirleaf scandal

Dahen told DW he believes that this is just more proof that having family members of important politicians in high positions at economic institutions is difficult.

"This is not the first time that members of the Sirleaf family have been the source of scandal. Some years back, Robert Sirleaf was also implicated in some corrupt practices."

Robert Sirleaf, another son of Ellen Johnson Sirleaf, was the chairman of the National Oil Company of Liberia (NOCAL), that went bankrupt under his chairmanship in 2016.

Under his management, 30 million to 40 million US dollars disappeared.

"Generally we can see that there were incidences of corruption or scandals that were reported under the Sirleaf administration." Miamen said

"Given the incidences of corruption and the dubious nature of some of the dealings under the then leadership of Sirleaf, we can see that it is not strange that something like this is coming up."

Ellen Johnson Sirleaf herself was listed in the Paradise Papers 2012 as a director of a Bermuda-based financial company. The leak shows how many of Africa's rich and powerful – from the head of Nigeria's Senate, Bukola Saraki, to Ellen Johnson Sirleaf, the former president of Liberia – park their money in offshore havens.

Evelyn Kpadeh in Monrovia contributed to this article.

Liberia's president resumes her position at the helm

Liberian President Ellen Johnson-Sirleaf is embarking on her second term in office. For the next six years the 73-year-old Nobel Peace Prize laureate will determine the country’s course. It will not be an easy task. (16.01.2012)

Change in Liberia: Journalists in the battle against corruption