The trial has begun for the former leader of the West African nation accused of various crimes during the war that began in 2011. His case is also seen as a major test for the ICC. 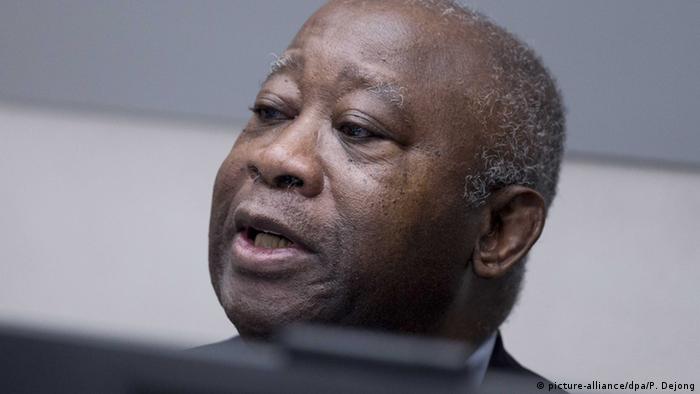 Laurent Gbagbo pleaded not guilty on Thursday during the opening of his trial in The Hague, which drew droves of supporters for the former president, the first head of state to be tried by the International Criminal Court (ICC).

Gbagbo, as well as his co-accused Charles Ble Goude, face four charges of crimes against humanity, including murder, rape and persecution.

His crimes were allegedly committed during the war that began in the Ivory Coast in 2011, in which more than 3,000 people were killed. Gbagbo refused to step down after his rival Alassane Ouattara won elections in November 2010, sparking a civil war between supporters of the two politicians that didn't end until France, the country's former colonial power, intervened.

A test for the ICC

Reuters reported that hundreds of people gathered in front of the court to voice their support for Gbagbo, insisting he was being punished for standing up to France.

One Ivory Coast woman told the news agency that the trial was an example of "neo-colonialism."

The trial is also a test for the ICC, which garnered criticism for its haphazard attempt to try Kenya's former president, Uhuru Kenyatta.

ICC prosecutor Fatou Bensouda told DW's Conflict Zone that despite the criticism, the ICC is widely supported by people in Africa.

She also dismissed the accusation that the ICC was entirely focused on African cases.

"I think it is correct to say that most of our cases or all of our cases at the moment are in Africa. But that is not the whole picture," she told Conflict Zone's Tim Sebastian.

ICC prosecutor warns of 'falsehoods' ahead of Gbagbo trial

The ICC's chief prosecutor has attempted to reassure people that the trial will "uncover the truth through a purely legal process." The former Ivorian president is the first head of state to be tried by the court. (27.01.2016)

Ex-Ivory Coast President Laurent Gbagbo faces charges of crimes against humanity at the International Criminal Court in The Hague in connection with months of post-election violence that killed 3,000 five years ago. (27.01.2016)