Former Israeli foreign minister Avigdor Lieberman has pleaded not guilty at the start of trial in Jerusalem on fraud and corruption charges. The ally of premier Benjamin Netanyahu resigned from cabinet two months ago. 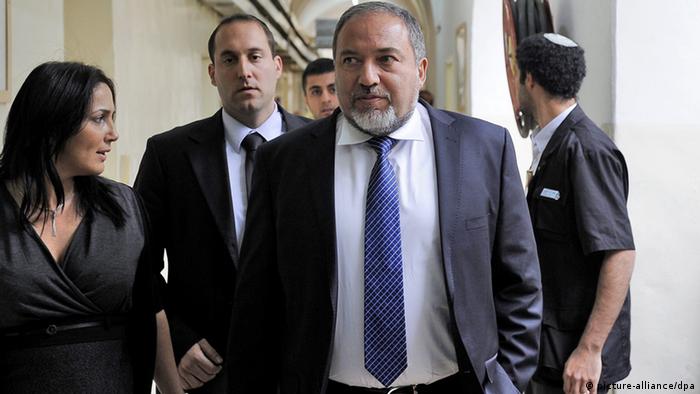 Israeli prosecutors accuse the ultranationalist Yisrael Beitenu leader of trying to advance the career of a diplomat who relayed confidential information about a previous criminal investigation into Lieberman's dealings.

Liebermann pleaded not guilty at Sunday's trial opening in the Jerusalem Magistrates' Court. The court will reconvene on April 25 to begin hearing evidence.

The case could determine whether Lieberman, a former nightclub bouncer, can return to his ministerial post in the Israeli cabinet. Under Israeli law, conviction on the fraud and breach of trust charges can disqualify a person from holding a cabinet post.

The Maariv newspaper said if convicted Liebermann would also "be forced to resign from the Knesset."

The prominent hard-liner, who has been investigated several times since 1996, has indicated that he wants to return to Israel's foreign ministry. Barred from cabinet while on trial, Lieberman continues to serve in parliament.

Three judges were hearing the case, which commentators said was likely to make the prospect of a possible subsequent appeal harder for Liebermann's lawyers than if a single judge had sat alone on the bench.

Israel's foreign minister is known for his blunt words, but Avigdor Lieberman has become more reticent since he announced his resignation. Despite the charges against him, Lieberman plans to run in the January election. (16.12.2012)

In last month's Israeli election, Lieberman's party ran on a joint list with Prime Minister Benjamin Netanyahu's Likud who is currently serving as acting foreign minister. Their combined bloc emerged as the legislature's largest faction and could dominate the next ruling coalition.

Netanyahu continues to negotiate, however, with various potential partners. He has until mid-March to form the government.

The Beitenu party of the Moldova-born Lieberman is popular among immigrants from the former Soviet Union.

Liebermann has pushed anti-Arab proposals, including an attempt to require Israelis of Arabic origin to sign a loyalty oath or have citizenship revoked. Lieberman has even embarrassed Netanyahu by expressing contrary views to the government's, including skepticism over peace with Palestinians.