The former top man in world athletics will be sent to jail for his role in shielding Russian Olympic athletes suspected of doping. He was also guilty of taking bribes for Senegalese President Macky Sall's 2012 campaign. 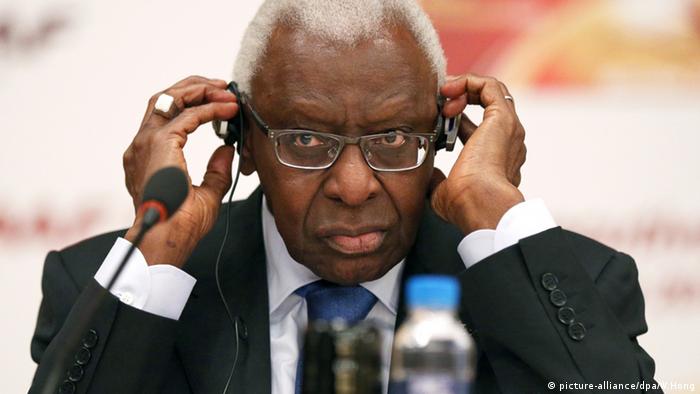 Lamine Diack, the previous president of what's now called World Athletics, but was known during his tenure as the IAAF, has been found guilty of corruption for his role in a scheme that allowed Russian athletes to compete while doping.

He was found guilty of accepting bribes from athletes who were suspected of doping and allowing them to continue to compete in athletics competitions, including the 2012 Summer Olympics in London.

The court was previously told that Diack feared that punishing the athletes could hamper negotiations with a Russian sponsor. Prosecutors said he solicited bribes worth over €3 million from athletes suspected of taking performance-enhancing drugs. The judge said the former long jumper's actions "undermined the value of athletics and the fight against doping."

The judge added that the bribes Diack received were for "full protection," allowing the athletes who should have been suspended "purely and simply to escape sanctions."

Diack's lawyers said they would appeal the conviction.

Diack was the head of the IAAF (recently re-named World Athletics, owing in no small part to the scandals involving Diack and his successor Sebastian Coe) from 1999 to 2015.

Diack's son, Papa Massata Diack, was also on trial. He was tried in absentia, also on charges of corruption, money laundering and breach of trust as a former IAAF marketing consultant. Papa Diack was in Senegal during the trial.

He is wanted on an Interpol red notice, but Macky Sall's government refused to extradite him.

The judge said $15 million was funneled to his companies, with money creamed off contracts and sales of TV broadcast rights while his father was the IAAF head.

Papa Diack called the charges against him "the biggest lie in the history of world sport" ahead of Wednesday's verdict. He said he earned his salary from the athletics body legally.

He was sentenced to five years in prison and a fine of €1 million in his absence. The court gave guilty verdicts to three other people involved.

Russia's chances of competing in Rio are looking more and more unlikely after news of further corruption and blackmail on Thursday. The IAAF has acted confidently by issuing a number of lifetime bans.

A timeline of IAAF doping scandal

An independent commission set up by WADA is shortly expected to release its report on allegations of widespread doping and blackmail in Athletics. Here is a look at the story so far.