Former FIFA Secretary General Jerome Valcke has filed an appeal against his 10-year ban from football. FIFA issued the ban last year over a scandal involving the sale of World Cup tickets and television rights. 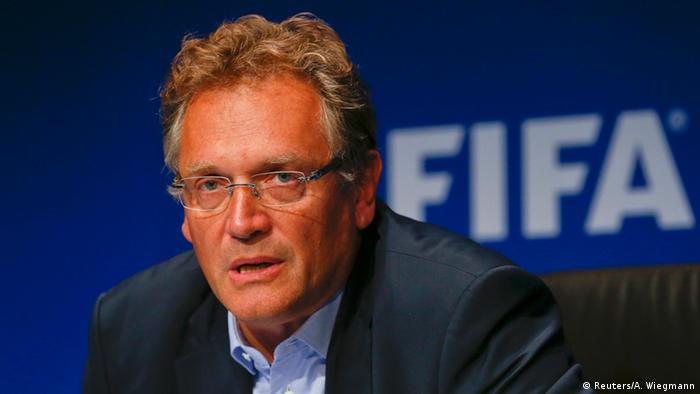 The Switzerland-based Court of Arbitration for Sport (CAS) announced in a statement posted on its website that Jerome Valcke had filed the appeal to a decision issued by the FIFA Appeal Committee last June.

A year of Infantino: What has changed at FIFA?

Just a year in office, FIFA President Gianni Infantino has made his mark by expanding the World Cup from 32 to 48 teams. It has been a quiet year for the organization, although trouble is never far away. (26.02.2017)

Valcke, the former right-hand man of axed president Sepp Blatter, has been suspended since September last year amid allegations of profiting from the sale of 2014 World Cup tickets. (12.02.2016)

In that decision, Valcke's original 12-year ban from all football related activities was reduced to 10 years. However, the CAS said that in his latest appeal, the Frenchman "seeks to have the challenged decision set aside in order for the sanction imposed on him to be lifted definitively."

Valcke, who was FIFA's secretary general from 2007 until September 2015, became embroiled in the corruption scandal that broke out with a police raid on a Zurich hotel ahead of the FIFA Council in May of that same year, in which several senior FIFA officials were arrested.

After allegations of corruption emerged against him, FIFA placed Valcke on leave and handed him a provisional 90-day ban from football. When this expired, he was banned for a further 45 days, and as the allegations against him deepened, he was sacked from his FIFA post in January 2016.

In February 2017, FIFA ethics judge Hans-Joachim Eckert found Valcke guilty of misconduct over the sale of World Cup tickets above face value, attempting to sell television rights below their market value, abuse of travel expenses and destruction of evidence.

Valcke has denied any wrongdoing.