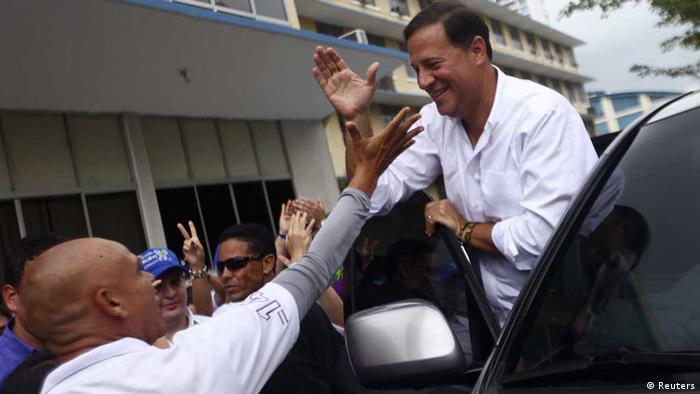 Vice President Juan Carlos Varela, running as an opposition candidate in Sunday's election, had a comfortable lead over Jose Domingo Arias and his other main rival with 60 percent of the votes counted.

Varela held 39.0 percent of the vote, compared to 32.1 percent for Jose Domingo Arias, the chosen successor of President Ricardo Martinelli. Left-leaning candidate Juan Carlos Navarro, formerly a mayor of Panama City, was third in the seven-candidate field with 27.6 percent. Officials put voter turnout at just over 75 percent, the remaining four candidates received less than 1 percent of the vote each.

"Today Panama wins, today our democracy wins," 50-year-old Varela said in the call with the head of the election tribunal. A simple majority suffices for victory in elections in Panama, with no need for a runoff between leading candidates.

At the last presidential poll, in 2009, Varela played a crucial role in securing Ricardo Martinelli's election, running on his ticket as vice presidential candidate. But the center-right Partido Panamenista (Party for Panama) politician fell out with Martinelli in 2011.

He was therefore able to claim some credit for Martinelli's more popular policies, while in turn promising a cleaner government during this year's election campaign. Key campaign pledges included cutting the cost of living, reducing poverty and tackling corruption.

Opinion polls before the vote had predicted a far tighter race, even giving a slight edge to Arias, Martinelli's hand-picked successor in the Democratic Change (CD) party. Under Panamanian law, a president cannot run for direct re-election after serving a term in office. Martinelli's wife, Marta Linares, was Arias' running mate and vice presidential candidate.

Varela also inherits oversight of the major expansion of the Panama Canal, which briefly stalled this year after a dispute over costs between the canal and the building consortium.

Assuming finalized election results confirm Varela's victory, he is set to be inaugurated on July 1, to serve a five-year term. Panamanian citizens on Sunday also elected 71 members of the country's National Assembly.