Amid the chaos of deadly protests in Egypt, former IAEA chief Mohamed ElBaradei has emerged as the most respected voice in the opposition to Murabak's regime. ElBaradei has a record of standing up against authority. 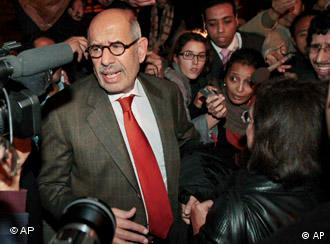 ElBaradei vowed to continue protesting until the regime fell

As tens of thousands of Egyptians continue rallying for President Hosni Mubarak's ouster, former International Atomic Energy Agency (IAEA) chief Mohamed ElBaradei has emerged as the most credible voice of the opposition.

ElBaradei returned to Egypt from Vienna on Thursday and has since led protests against Mubarak's 30-year regime, voicing to international media the opposition's calls for Mubarak to step down.

The Cairo-born lawyer and Nobel peace laureate has declared his readiness to lead a transition government should the Mubarak regime fall.

ElBaradei vowed Saturday to return to the front lines of the fifth day of nationwide protests, saying, "I will go back into the streets today with my colleagues to contribute to bringing change... and to tell President Mubarak that he must go," he said. 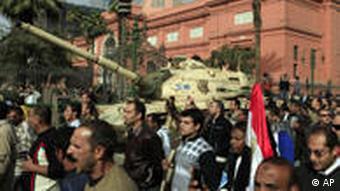 "When the regime behaves so lowly, and opens fire with a water cannon on someone who has received the Nobel prize, it indicates the beginning of the end for the regime, and it must go," he added.

Earlier, in an interview with France 24 television, ElBaradei said there was "consensus in Egypt in every part of society that this is a regime that is a dictatorship that has failed to deliver on economic, social and political fronts."

"We need a new beginning," he said.

ElBaradei's calls for a new beginning in Egyptian governance also represent a new beginning for the would-be opposition leader, who served three terms as director-general of the United Nation's Vienna-based IAEA nuclear watchdog from December 1997 until November 2009.

ElBaradei's colleagues expressed approval of his transition to political leader, saying they had no doubts about his intentions.

"Knowing the man, he's doing that for his country, I'm convinced," said Pierre Goldschmidt, who worked as the IAEA's head of global inspections under ElBaradei's leadership. 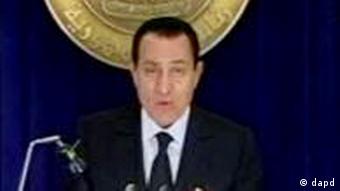 "I think he believes he has a real mission there. What the consequences of his action will be, that is the big question. I am not sure he even knows himself," Goldschmidt added.

Others painted a picture of a man who did not enjoy the spotlight.

"The odd thing is that I don't think he even likes crowds that much," said Ayhan Evrensel, a form IAEA spokesman. He said that as the organization's chief, ElBaradei "just wanted to get the job done and didn't want to publicize it that much."

A voice of opposition

ElBaradei has a record of criticizing authority. In 2003, he alienated many in the Bush administration by vocally denying the presence of weapons of mass destruction in Iraq before the US-led invasion of the country.

ElBaradei's role as opposition leader in Egypt remains uncertain despite widespread international attention. Although dozens of thousands of Egyptians are protesting the current regime, there is no unified opposition movement and Islamist opposition group Muslim Brotherhood remains a strong player.

Egypt's army has also been quick to point to ElBaradei's long residence abroad in a bid to portray him as being out of touch with the country.

Thousands of Egyptian protesters continued to roam the streets in Cairo and Alexandria after a government-imposed 4 pm curfew started. The army had warned people not to gather in public places. (29.01.2011)

Egyptian President Hosni Mubarak has dismissed his cabinet, vowing to introduce reforms after days of demonstrations against his regime and clashes with security forces which have left scores of people dead. (28.01.2011)