Brazilian scientists say they have discovered relics of the largest dinosaur ever to have been found in the country. Bones from "Austroposeidon magnificus" were unearthed decades ago but not studied until recently. 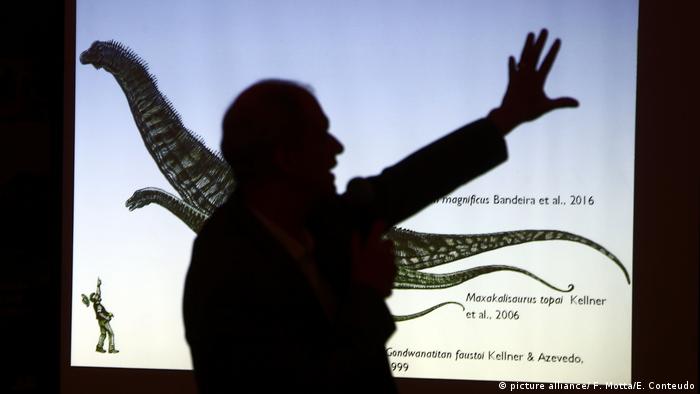 They were scary and enormous, but we're still fascinated with dinosaurs of all kinds. As a Spinosaurus model joins T. rex in a Berlin museum, we look at famous dinos you can visit and the hype surrounding the giants. (09.02.2016)

Hollywood has turned the idea of de-extinction into blockbusters, with the newest dinosaur movie just around the corner. But some scientists say creating new dino-like animals could be reality - someday. (10.06.2015)

Scientists say they have discovered fossils from a new type of dinosaur, with short arms similar to that of a Tyrannosaurus rex. However, the Gualicho appears to have evolved its puny arms independently. (14.07.2016)

The fossils - chunky vertebrae from the huge animal's neck and spine - were discovered by a farmer near the city of Presidente Prudente, in Sao Paulo state, in the 1950s.

Despite investigating and registering the find, paleontologist Llewellyn Ivor Price died in 1980 without ever being acknowledged for it. He simply had too many other specimens - and not enough time - to get around to it, according to fellow dinosaur expert Alexander Kellner.

"Price knew that he had found a gigantic animal, but he had so many others to identify that he ended up not having enough time", Kellner told the Brazilian newspaper Folha de Sao Paulo.

For decades, the bones were kept inside a wooden cabinet at Rio de Janiero's Earth Sciences Museum, and were only studied in recent years.

The announcement of a new species was made on Wednesday at the Rio museum, by director Diogenes Campos, who named the animal "Austroposeidon magnificus."

The dinosaur was about 25 meters (80 foot) long and six to eight meters in height. It belonged to the Titanosaur group of herbivores, which is characterized by its members having large bodies, long necks and tails and relatively small skulls. 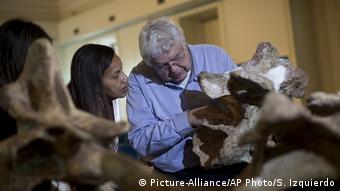 It was about six to eight meters tall and lived in what is now Brazil some 70 million years ago.

The significance of Price's fossils first grew clear three years ago, when Camila Bandeira, a graduate student from the Federal University of Rio de Janeiro's National Museum began her research into it.

"Imagine these creatures running in a group," said Bandeira. "They would surely have caused a great tremor."

"What draw my attention to it was the size of the material and the fact that nobody had tried to study it in depth," she added.

Similar bones have been found widely; Titanosaurs lived across the one-time supercontinent of Gondwana, which drifted apart to form the land masses of Africa, Antarctica, Australia, India and South America.

Famous dinosaurs you can visit

It's "Jurassic Park" in Berlin. In the film, the T. rex was overcome by the Spinosaurus. But at Berlin's natural history museum, the two dinosaurs will stand peacefully side-by-side for the next four months. (09.02.2016)