For Uganda, the world is not enough

His neighbors think he's crazy, but Ugandan flight engineer Chris Nsamba wants to fly to the top layer of the Earth's atmosphere in a homemade orbital glider. It could be the start of a Ugandan space program. 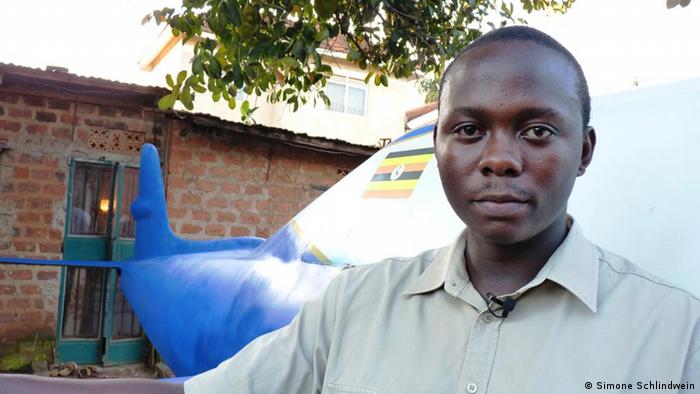 Standing in the back garden of a small house in the Ugandan capital Kampala, a dozen men are busy sanding down the surface of an aircraft before it is painted.

But this is no ordinary aircraft.

Its makers want to fly as high as the stratosphere, where they hope to investigate meteorites, which enter the Earth's atmosphere.

It could be the start of Uganda's space program - and project leader Chris Nsamba says it is.

"We tested a prototype last May," said Nsamba, "and it took me as high as the edge of the Earth's atmosphere." 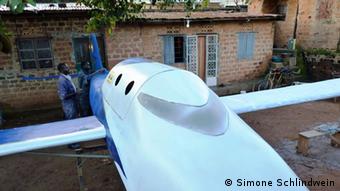 Some parts have yet to arrive, but Nsamba says his design works

As far as Nsamba is concerned, the flight proved his technology works.

The aircraft will have to reach a height of 45,000 feet (about 13 kilometers) before it reaches the stratosphere. Nsamba plans to make a first attempt this year, and if the test flight is successful, he will build a second craft with which he hopes to fly into space.

Nsamba says he wants to be the first Ugandan in space - it is a childhood dream.

From NASA to Kampala

The 26-year old studied flight engineering in the American state of Texas, where he conducted his first experiments with planes and gliders.

"By the age of 13, I had already built my first rocket," said Nsamba.

When he was much younger, friends of his family, who worked for the US space program, NASA, gave him lessons in engineering, during which he says he learnt a lot. As part of his degree, Nsamba headed a project to build a plane and in 2003 he became its test pilot.

"Back then, I thought I'd never get the chance to test fly another plane," laughed Nsamba, "but eight years later, it's that time again."

Support from the top 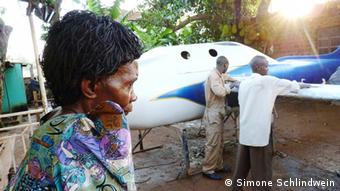 His neighbors think he's crazy and his mother looks sceptical too

But Nsamba's plan to test fly his latest craft may yet run into trouble.

He is importing all of the electronic components - such as the engine unit and the avionics - from the US and is still waiting for them to arrive. Nsamba thinks Ugandan customs may take their time over the shipment because no one has ever tried to bring such equipment into the country.

Nsamba will also have to apply for a permit to fly in East African airspace and organize a helicopter to transport the orbital glider from the garden at his parents' house to an airfield.

So far, financing for the project has come largely from membership fees and donations to the space agency he founded, the African Space Research Program. But Nsamba has also received backing from the very top - the Ugandan President, Yoweri Museveni, has called Nsamba personally and pledged to find cash support as well.

One member of Nsamba's space agency is Nixon Lugenke, who is also working to prepare the wings before they are painted.

"This is a good starting point for my career," said Lugenke, "I've been fascinated by space since I was a child."

Whenever Lugenke has time after work, he comes around.

"It doesn't matter if people think we're crazy, I want to be an astronaut and I'm learning all about it here," said Lugenke.

"And the space agency," he adds, "could be a good inheritance gift for future generations of Uganda."

Some donations have come from Kenya and even the US.

It is only a matter of time now before Chris Nsamba can leave the Earth's atmosphere behind.

A Russian science satellite, loaded with rocket fuel for a mission to Mars, has plunged back to Earth showering debris over the Pacific Ocean. The Phobos-Grunt was Russia's most ambitious space mission in decades. (15.01.2012)

A Russian Soyuz spacecraft has docked with the International Space Station, carrying three new crew members. The successful flight is a relief for the Russian space program, which has seen a series of recent failures. (16.11.2011)

Small galaxies are more fertile, apparently. New images from the Hubble Space Telescope have surprised astronomers by revealing a much faster rate of star births in far-distant dwarf galaxies than expected. (11.11.2011)