Suriname's 60-year-old vice president, Ronnie Brunswijk, recently played a continental competitive match for the club he owns. CONCACAF has banned him, and the two teams, over "integrity issues." 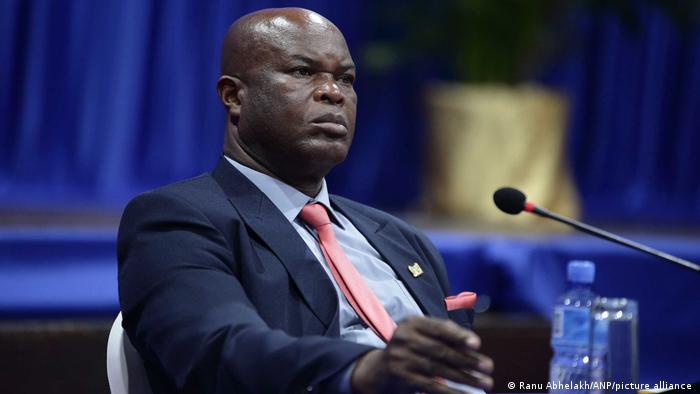 Ronnie Brunswijk has served as Suriname's vice president since 2020

Brunswijk, second in line to Surinamese presidency and the Inter Moengotapoe football club owner, had picked himself for his side's CONCACAF League match against Olimpia of Honduras.

After the game, a video widely circulated on social media showed 60-year-old Brunswijk appearing to distribute cash to Olimpia players, after their 6-0 victory against Inter.

Football's governing body in the Americas, CONCACAF, said a day later that it opened a disciplinary probe into his bizarre appearance at the regional game, which made headlines worldwide.

On Saturday, CONCACAF said it "has fully investigated the circumstances surrounding the integrity concerns" following the match.

The football governing body "determined that serious breaches of integrity rules occurred after the match," it said in a statement, seemingly referring to the video.

Both Olimpia and Inter Moengotapoe have been disqualified from this year's CONCACAF League with "immediate effect," the statement added.

CONCACAF also banned Brunswijk from participating in "any capacity" in its competitions for three years, and said other individuals could also be sanctioned in connection with the case.

Brunswijk is a wealthy businessman and politician. He was first elected to parliament in 2005.

In 1999, he was convicted of drug trafficking in the Netherlands, Suriname's former colonial ruler. A year later, he was found guilty of the same crime in France.

He was sentenced in absentia to 8 years in prison in the Netherlands and 10 in France.

However, Brunswijk is safe at home, as Suriname does not extradite its citizens.

On Tuesday, Brunswijk played for 54 minutes in Inter Moengotapoe's defeat, alongside his son, Damian Brunswijk.

Even if CONCACAF hadn't banned him and both teams, Brunswijk was unlikely to be in the squad for the second leg in Honduras, as he could risk arrest and extradition.