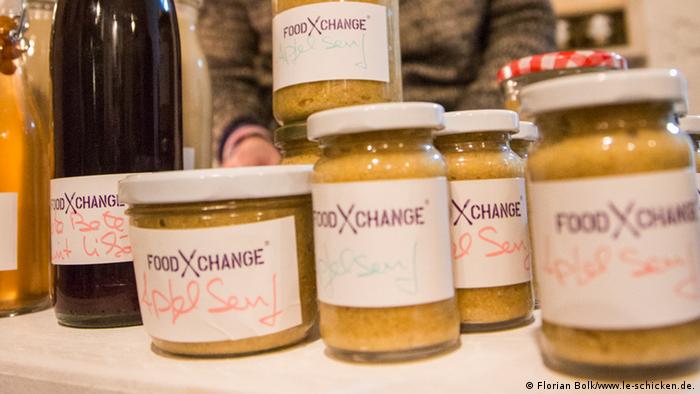 On a recent Wednesday night at Charlottenburg's Cooks Connection, I'm surrounded by jars of pickles, spicy kimchi, and silky lemon curd. Pretty packages of cookies and candies sit on the tables. Everything looks delicious. As my stomach rumbles in anticipation, I'm eager to pick out a purchase. But I won't be taking any of these items home, because this is a food exchange, and I don't have anything to trade.

Welcome to foodXchange Berlin, a monthly meeting of local food preservation enthusiasts and resourceful cooks interested in swapping their wares rather than exchanging money for them. 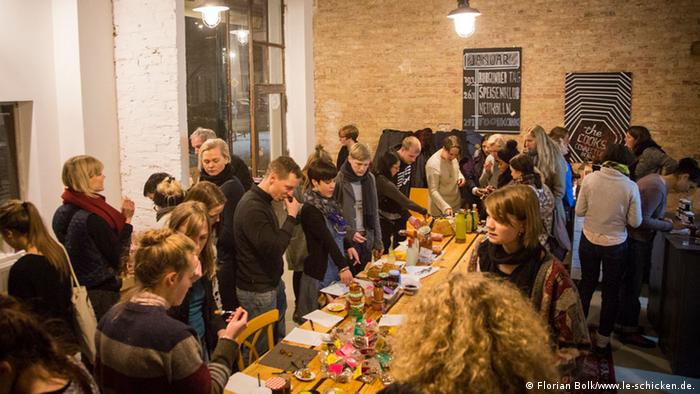 During their initial meeting back in October 2013, Brandes said most attendees were more interested in watching rather than participating, but fast forward a few months, and by now the group has built up a steady group of regulars. It's mostly women and a few men in their 30s and 40s with an interest in food conservation and a community centered around food.

The foodXchange generally meets at Kreuzberg's Markthalle Neun, which has become a hub for these types of back-to-roots food events in Berlin. Traders spend the first portion of the meeting discussing what they have. It's a mix of homemade products like kimchi, self-harvested items like chestnuts, and baked goods such as gluten-free cakes. Then they talk about what they are wiling to exchange. Infused liquors and preserved items catch a higher rate than, say, baked goods. In the second half, the air turns a bit frenzied as everyone makes the trades. 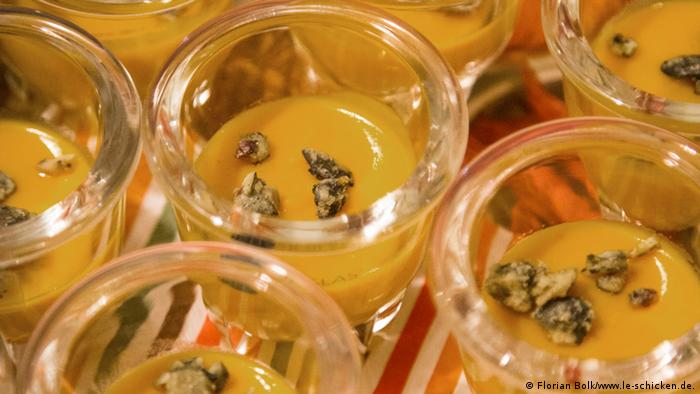 Only a trade - not money - can make these tasty treats yours

For an outsider, the pretty jars and packages might inspire one to offer up money, but these private meetings are all about bartering. "The people we have reached so far are very conscious people. They like the idea to exchange and not to use money, and I think that is one of the attractions," says Brandes. "It's the spirit of the thing to not use money, to give food a different value."

For Malin Elmlid's Bread Exchange, the attraction also comes from a shared connection between the traders. Elmlid founded her network in 2009, when she found herself with a surplus of the sourdough bread after she had started baking to satisfy her taste for a quality product. For nearly two years, she gave the bread away to friends and then friends of friends. Slowly people began offering items in return; her first trades were for vintage photographs and tickets to the Philharmonic.

Although Elmlid didn't start the Bread Exchange with the intent of creating an expansive friends network, she is aware how important trust is in the modern trading system. "No one would trade my bread if I was anonymous," she says. "If someone put jam on my doorstep I wouldn't eat it. It's completely depending on me, on being trustworthy."

Five years later Elmlid has done more than 1,300 trades, exchanging items like Israeli salts, organic flours, and even travel accommodations for her bread, throughout Europe and in places as far as Morocco, Kabul and Santa Rosa, California. 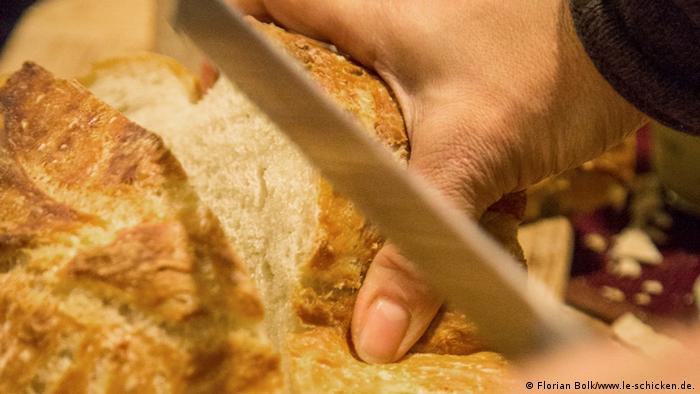 Bread inspired Malin Elmlid to trade food, just as it's a staple at the foodXchange, pictured here

Trades happen for many reasons - some are friends, some are interested in the trading network and most are tempted by the flavor of her rich sourdough bread. There is also a curiosity in the story of the exchange itself. "What we see is an interest to get stories and find some kind of value in what we eat because there isn't [that value] if we buy it from the supermarket," Elmlid says. "Things just taste better if we know where they are from."

A book documenting these stories and many of her travels, "Bread Exchange," is set to be published October 2014, and, in the spirit of her network, much of the book's production, including some of the photography, recipe testing and travel was done through trading.

With food-focused events, like Martkthalle Neun's Street Food Thursday, becoming more and more popular in Berlin, food has become a hip topic in the nation's capital. But Cathrin Brandes isn't as focused on the trendiness of foodXchange Berlin as she is looking at the tradition of food preservation that goes back generations in Berlin. "In Spain, people in the cities lost a lot of traditions long ago. For them, making preserves is something you only do in the village, it's not something you would do in the city," she says. "Here in Berlin, it's something everybody did, even in the good-situated houses. Here you follow a tradition; in other cities it's not that easy."

As her Berlin group grows, Brandes hopes to spread the idea of the foodXchange and preservation outward. During the most recent January foodXchange meeting, a group of culinary students visiting from Copenhagen participated. Along with their jars of lemon curd, tomato jam, and pickles, the students brought home with them the foodXchange logo, which Brandes hopes will encourage them to start their own chapter in Copenhagen.

To beer or not to beer in Berlin

When it comes to fun, people mostly stick to food and drink. Holidays are all about cooking, birthdays are filled with cakes and champagne. And Berlin's fair focusing exclusively on belly filling is paradise on earth. (23.01.2014)

Julia, a young organic farmer in Berlin, says big companies are buying up the land she needs. Now she and her fellow farmers are fighting back with a campaign to raise awareness among the people who buy organic food. (15.01.2014)