The World Food Programme's Jane Howard discusses food deprivation with DW. She considers the impact on international law, aid agencies, and the short- and long-term effects on survivors of a siege. 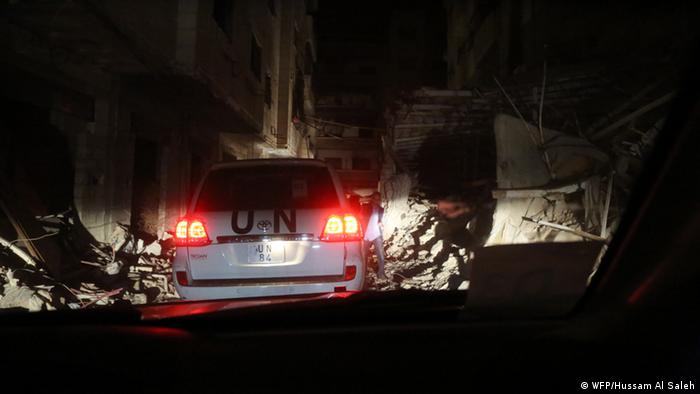 DW: What is the legal situation of food deprivation?

Jane Howard: Depriving people of their means of survival - and that means blocking relief supplies, blocking food supplies - is actually listed as a violation of international humanitarian law. In particular, using the starvation of civilians as a method of warfare is a well-known and recognized war crime.

That doesn't mean to say it is something you can take people to court over, but there is a recognition. And even under the traditional rules of warfare, the Geneva Convention, willfully causing great suffering is recognized as a breach of the rules of war.

Why can't the perpetrators be taken to court?

It's possible through the International Criminal Court, but there are political reasons. That means those efforts sometimes get blocked. This is a political issue for political leaders or peacemakers to sort out.

The World Food Programme is really left picking up the pieces and trying to make sure that doesn't happen, negotiating on the ground and really working wherever we can to avoid getting to that situation.

What does that mean for aid organizations trying to deliver food to people in war zones? 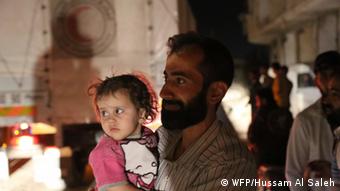 I think when you see a war going on and on in a protracted way, like in Syria now, where it has been going on now for five years, you see a return to those tactics that are associated with medieval warfare, where in a long-running conflict people try to take territory. And one of the ways you do it is that you cut off towns and villages and hope the civilian population will just abandon them and leave.

Sometimes, when they don't do that and the communities are encircled, then you have a situation where trade is disrupted so food's not going in and out very easily. And sometimes, if this goes on for months and months or even years, you will then see the condition of the people, the psychological and even the physical condition, slowly deteriorate to the point where it becomes an acute and worrying situation.

In some wars you start to see malnutrition rates rising, but it's a big challenge for the aid agencies because it also means you can't get access to actually see what the situation is. And that's a problem on its own.

In the short term, what impact does this have on people trapped in a city under siege?

The first thing that happens is that prices start to go up. Trade gets disrupted, your local deliveries don't happen, the supermarket might close, the local shopkeeper may leave, and markets don't function - farmers can't get their produce to market.

There are whole areas of northeastern Syria that used to produce wheat and grain, and it's a place where people eat bread. Even though the fields are there, sometimes there is no fuel for the tractors. There may be roadblocks on the way to get food to market.

So you've got an economy that is collapsing. That's the first thing that you notice. When food prices then go up, the people who really are hit the hardest are the poorest and the most vulnerable.

They're the people who don't have any savings. They're the people who may be able to rely on relatives for a short while, but then they get into debt. Then they realize they're not managing to get enough food so they cut back. They drop back to only feeding the children, skipping meals themselves, and eating one meal a day instead of three meals a day. And slowly, slowly, it gets worse.

After several months, depending on the kind of town or village it is, if they can't grow their own food, or go out to gather wild vegetables or fruit or nuts; if it's not a country area with little patches of land they can tend, then they are really, really stuck.

And we start to hear reports of people eating grass, boiling leaves, making a kind of a stew from nothing - and it's very much the poorest, because there will always be smuggling. That means people can get food in.

You may remember the dreadful pictures that came out of the Syrian town of Madaya earlier this year, in January, when people were starting to get thin and malnourished, and were getting sick from a lack of food. I remember when some of my colleagues finally managed to deliver some food. When they came out, they told us they had met a family who had sold their car for three kilograms of rice. People were talking about rice being $300 a kilo. So you're just really scratching a living and struggling to survive.

What are the long-term effects on people who survive a prolonged siege?

Clearly the economy takes years and years to recover. The World Food Programme works in so many countries where there have been conflicts, especially in recent years, like Syria or like South Sudan.

We have whole programs of recovery where you literally need to rebuild towns and villages, rebuild roads, rebuild schools and rebuild water systems, which are completely left to go to rat and ruin during a war. 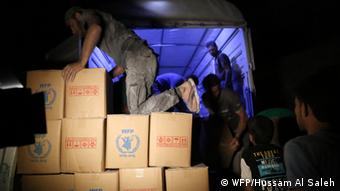 In terms of nutrition, you worry when things get too acute in terms of malnutrition. You worry it can affect a whole generation. Suppose you had areas where the nutritional status deteriorates to a point where pregnant women and young children don't get good nutrition. Even if the war finishes and your family can tend its fields and you can go back to the family's previous diet, what you see is that the children just don't grow and thrive.

Even as adults it means they're shorter in height. That's called stunting. It means they don't develop mentally as well as they would. They tend to have trouble staying in school; they drop out earlier. That means they don't earn as much money as adults. It even has an economic impact on the whole state of the country.

If those new mothers, nursing mothers, and toddlers don't get nutrition consistently over the first thousand days of life, it's quite scary and sobering to think that that is going to have an effect on their whole lives, even as adults.

How common is food as a weapon of war? How often do we see this?

I think it's sadly very common. I mean, to describe something as a weapon is a very strong term, but we definitely see that warring factions, armed groups, will use it as a tactic.

Whether it's to actually starve a community out in a long-term siege, or whether it's just blocking ordinary trade and not allowing the delivery of shiploads of food or imports, as seen in Yemen at the moment. Food is vital for life, so unfortunately all parties, all different sides in a conflict, do tend to use it as a way of establishing their power and also taking control of territory.

Jane Howard is the Global Media Coordinator of the UN World Food Programme at its headquarters in Rome. She spoke to DW's Bruce Konviser.

The Assad regime has denied aid agency requests for medical supplies such as burn kits and surgical tools. Meanwhile, Syrians are growing increasingly desperate, with one report claiming people traded their car for rice. (11.06.2016)

Despite calls from London and Paris for aid drops to besieged areas in Syria to start soon, the United Nations has said humanitarian aid drops are "not imminent." They would require approval from Syrian officials. (02.06.2016)