Food adulteration: a much bigger problem than assumed | Asia| An in-depth look at news from across the continent | DW | 09.07.2010

New cases of melamine contaminated milk products have been reported from three provinces in China. State media said the level of the toxic chemical melamine found in samples was up to 500 times the permitted limit. 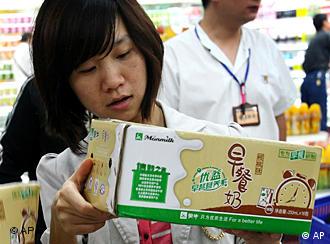 64 tons of tainted milk products have been seized by authorities in poor and remote parts of China's northwest and northeast. Just a few days ago, a UN agency for food standards set limits for the melamine concentration in food products. For powder infant milk formula the new limit is one milligram of melamine per kilogram of formula, while for other food it is 2.5 milligrams. This standard is identical with that of the Chinese Health Ministry, which released its standard two years ago after the scandal involving contaminated milk powder in China shocked the world.

According to official figures, the highest melamine concentration in milk products at that time exceeded 2500 milligrams per kilo. The highly adulterated milk powder caused the death of six babies, and around 300,000 babies fell ill. 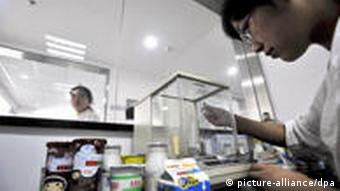 A lab assistant checks the content of melamine in milk products

New rules may not help

"There are plenty of rules and regulations in China as far as food safety is concerned. But as I have always emphasized: China is not lacking rules, but the rule of law. Many lawmakers, law enforcement officers as well as very normal people have no true respect towards the law."

Zhou Qing began to investigate food safety in China in the late 1990s. The results were shocking. A producer used sick and dead animals to make their well-known "braised chicken". A famous ham producer soaked the meat in Dichlorvos – a toxic pesticide, so the ham later would not attract flies. 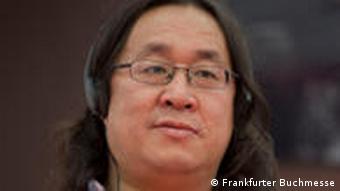 A book about food safety

Based on his investigations, Zhou Qing published his book "What Kind of God – A Survey of the Current Safety of China's Food" in 2004 in China after having to delete two thirds of the content. In 2006 the book won the international Lettre Ulysses Award for the Art of Reportage.

In his book, Zhou Qing forecast that scandals related to food safety would drastically increase. With the tainted milk powder scam emerging soon after the 2008 Olympics, his fears came true. His book was acclaimed widely and was translated into different languages. A revised version in Mandarin is being published in Hong Kong. 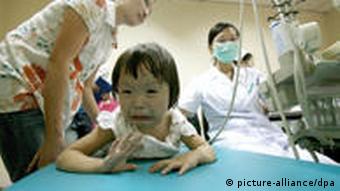 In it, the author makes another prediction: the so-called "Egg and Milk Project" in Chinese schools will lead to the next huge scandal. The government has ordered that school children in rural areas be given a glass of milk and an egg at low prices every day. Zhou Qing says the safety of these products is not guaranteed, so the risk of children falling sick in large numbers is very high. He believes government officials are promoting this project for their own interests:

"Why is the government placing advertisements for milk companies? There must be a hidden agenda here. Unfortunately, just as my book was going into print, two scandals relating to the 'Egg and Milk Project' hit the headlines in Shanxi Province, where hundreds of children became ill. I am really losing hope for food safety in China."

Food is the people's Heaven, a Chinese saying goes. But it seems this heaven has turned into hell for many Chinese consumers.

Liu Jianqiang is an environmental journalist whose bilingual activism and investigation brings debate about Chinese issues to the Anglophone world. Deutsche Welle asked him about the challenges of his work. (23.06.2010)

A Chinese court has handed down harsh sentences in the baby milk scandal which killed at least six children and left 300,000 ill with kidney and urinary tract problems. (22.01.2009)

More than two months after the scandal over tainted milk hit the headlines in China and abroad, more details keep coming to light. Although the authorities keep reassuring consumers that food is safe, many consumers have doubts about what they are eating. (21.11.2008)