Marjory Stoneman Douglas High School students and teachers have returned for a day of "emotional readiness and comfort." Two weeks after a deadly attack, a student movement for gun control is gaining momentum. 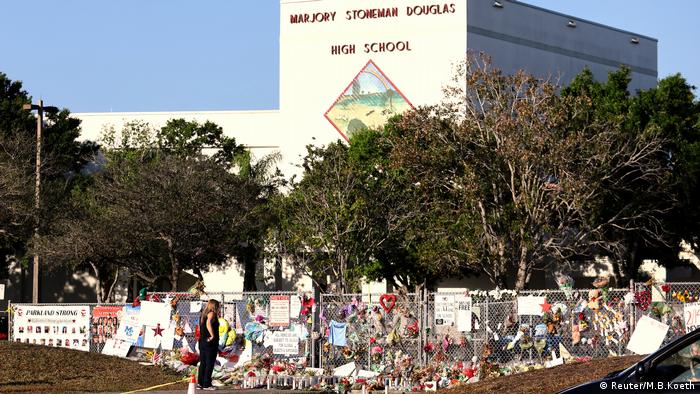 Classes resumed at Marjory Stoneman Douglas High School on Wednesday, two weeks after 17 people were shot dead by a former student at the school in Parkland, Florida. Students and teachers cried, talked and hugged each other during the shortened school day.

"In the beginning, everyone was super serious, but then everyone cheered up and it started being the same vibes we had before the shooting. People started laughing and joking around," Kyle Kashuv was quoted by The Associated Press as saying.

Principal Ty Thompson wrote on Twitter that "our focus is on emotional readiness and comfort, not curriculum: so there is no need for backpacks."

Dozens of police officers were on hand at the school, bringing with them dogs and horses to comfort the children — though some pupils expressed their discomfort at the military-style service weapons carried by some.

"This is a picture of education in fear in this country. The NRA wants more people just like this, with that exact firearm, to scare more people and sell more guns," said David Hogg, one of the leaders of the students' growing movement to fight for gun control in the US.

The day's schedule put the fourth period first, so that students and teachers could be with whom they were with during the shooting. After classes ended, the children were escorted off campus by members of the Guardian Angels — an unarmed crime-protection group.

The shooting at Parkland has galvanized a movement to put pressure on US lawmakers to craft stronger gun control legislation. In just two weeks, the students have taken part in a number of rallies — with a national school walkout scheduled for next month — and had a face-to-face with Florida Senator Marco Rubio in which they slammed him for accepting campaign donations from the National Rifle Association (NRA).

Pressure has been mounting on the gun lobby, with dozens of US firms cutting ties with the group. On Wednesday, a sporting goods chain that is one of the leading purveyors of the assault-style weapons used in the Parkland shooting announced they would no longer sell these weapons.

President Donald Trump has signaled that he is in favor of modest new gun control laws, such as strengthening the state and national background check system and banning "bump stocks," which allow semiautomatic weapons to fire rounds faster.

Police were called to the home of Nikolas Cruz at least twice by his own mother, over his disturbing behavior. The FBI has admitted to receiving a tip about the shooter last year. (16.02.2018)