Fledgling Pirate Party reaches threshold for government financing | News and current affairs from Germany and around the world | DW | 29.09.2009

Germany's Pirate Party has found that the x's on voters' ballots mark the spot for treasure. The 850,000 votes they won in national elections won't get them into parliament, but it will get them campaign funds. 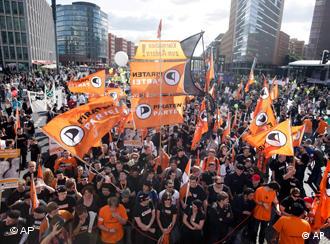 The Pirates are the seventh largest party in Germany

The Pirate Party won 2 percent of the vote, putting them well over the 0.5 percent threshold required to get campaign funding from the federal government.

Parties receive public funding in proportion to their results in the previous election, which means that the Pirates are due more than 700,000 euros (over $1 million) for their coffers. And for every euro in private donations, the German government will provide a match of 38 cents.

Party chief Jens Seipenbusch told German broadcaster ZDF that he already he's already considering ways to invest the money - hiring new personnel to handle the party's growth and buying software and equipment to facilitate online voting and discussion for members. The establishment of a political foundation, a fixture of all of Germany's major parties, is also a possibility.

"The election showed that our topics are important and that we will be successful in the future," Seipenbusch told DPA news agency at a victory celebration on Sunday.

Founded in 2006, the Pirate Party now includes more than 9,200 members. Last month, the party gained seats on city councils in Muenster and Aachen.

Its platform focuses on civil liberties - protection from surveillance in public areas, for example - and digital freedoms, such as support for Internet neutrality and the scaling back of copyrights. 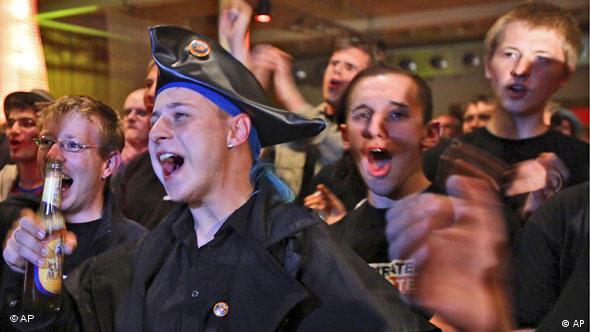 The Pirates did best among young males

But the Pirate Party has been silent regarding some of the bigger issues in Germany, such as military involvement in Afghanistan and whether to use tax cuts to stimulate the economy.

The Pirates appear to have found their strongest support on Sunday among young, tech-savvy voters, particularly males. According to a survey by Forschungsgruppe Wahlen pollsters, 10.2 percent of men under 30 voted for the party.

The Pirate Party failed to reach the 5 percent threshold needed to get seats in Germany's parliament, but that hasn't prevented them from looking ahead. It is now setting its sights on May 2010, when the most populous German state, North Rhine-Westphalia, elects its state parliament.

While Germany's larger parties are stepping up their campaigns, there is a host of less established parties joining the race. The Pirate Party is one of them. (18.07.2009)