Norwegians have paid tribute to the 77 people who were killed during a bombing and shooting five years ago. In remarks on the anniversary of the attacks, Norway's Prime Minister said: "Time does not heal all wounds." 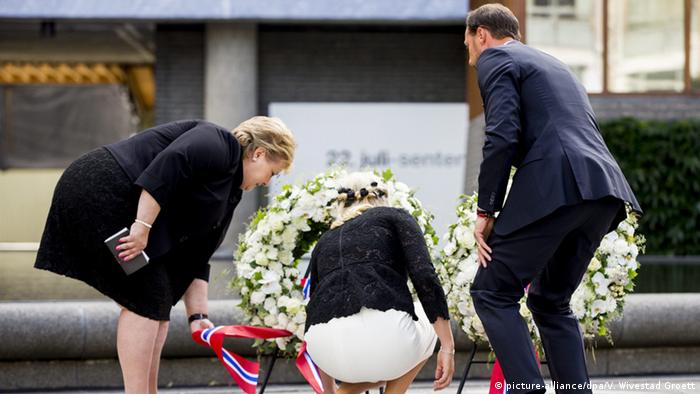 Memorial services have taken place in several places across Norway on Friday to honor those who lost their lives five years ago in gruesome attacks in the capital and on Utoya island.

"We still see the traces of the terror attacks," said Norwegian Prime Minister Erna Solberg during a wreath laying ceremony in Oslo. "After five years, many still need someone to talk to."

"Time does not heal all wounds," she said.

Together with members of Norway's royal family, Solberg laid wreaths at Oslo's government quarter - the site of a car bomb detonated by Anders Behring Breivik that killed eight people.

Young people read out the names of the dead. One Twitter user wrote that it was "hard to hold back tears."

NATO General Secretary Jens Stoltenberg was also in attendance during the memorials and is due to speak later at a service in Oslo Cathedral. He was prime minister during the attacks in 2011.

Condolences across the world

Germany's Social Democrats (SPD) offered their condolences on the five-year anniversary of the attacks, tweeting: "5 years after the radical right-wing attack on Utoya, we remember the victims and stand together against right-wing violence!"

The US ambassador to Norway Samuel Heins released a statement on Facebook expressing his "deep sorrow for the tragic loss of life on that terrible day."

The British Embassy echoed those thoughts, with deputy ambassador Carol van der Walt saying that the nations are "united against extremism and terrorism."

On July 22 in 2011, Breivik, a right-wing extremist, detonated a bomb at Oslo's government quarter, before embarking on a shooting spree at a youth summer camp on Utoya island which was organized by the nation's Labor Party. Most of the 69 victims on Utoya were between 14 and 19 years old.

During his court testimony, he claimed to have been acting in self-defense to protect Norway by attacking the left-leaning political party he blamed for the country's immigration policies. He was sentenced to 21 years in a maximum security prison, the highest sentence possible in Norway.