The five permanent members of the UN Security Council and Germany on Tuesday offered direct dialogue with Iran to solve the ongoing nuclear standoff with the Islamic Republic. 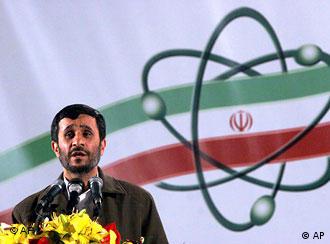 Iranian President Mahmoud Ahmadinejad has not backed down despite sanctions

A joint statement from the six nations -- Britain, China, France, Russia and the US plus Germany -- called on Iran to "take this opportunity for engagement with us and thereby maximize opportunities for a negotiated way forward.

"We remain firmly committed to a comprehensive diplomatic solution, including through direct dialogue," the so-called P5+1 nations said in a statement read to a closed-door meeting of the International Atomic Energy Agency (IAEA) board of governors in Vienna.

The six voiced serious concern at Iran's atomic advances and increasing restrictions on UN inspectors trying to keep track of them, but did not mention toughening sanctions as a way to rein in Iran.

Sanctions threats have been common in statements by Western members at earlier IAEA meetings. But Russia and China oppose further punitive steps. 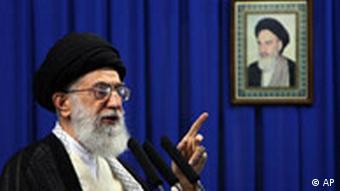 Ayatollah Ali Khamenei has called for Muslim resistance against Israel

Less than a day after the P5+1 statement, Iran's supreme leader Ayatollah Ali Khamenei maintained his country's aggressive rhetoric against Israel, urging the Muslim world to join the Palestinian resistance against the Jewish state.

"The only way to save Palestine is resistance," Khamenei said in his address to open a two-day global summit Tehran organized in aid of Gaza and the Palestinians.

"Support and help to Palestinians is a mandatory duty of all Muslims," he said. "I now tell all Muslim brothers and sisters to join forces and break the immunity of the Zionist criminals.

"Even the new president of the United States who came to power with the motto of changing the (George W) Bush administration's policies talks about unconditional commitment to secure Israel. This is defending terrorism by a government."

Tuesday's statement from the six nations came one day after the US ambassador to the IAEA, Gregory Schulte, outlined his country's intention to "strengthen diplomatic efforts" to address the challenges of Iran and Syria.

Under President Barack Obama, the United States has signaled its intention to enter into dialog with nations such as Iran, a step away from the isolationist strategies of the former US administration under George W. Bush.

Iran has reacted cautiously to Washington's new approach, saying it was open to fair talks while demanding fundamental changes in US policy, by which it means US-driven sanctions and accusations that Iran actively seeks nuclear weapons and supports terrorism. 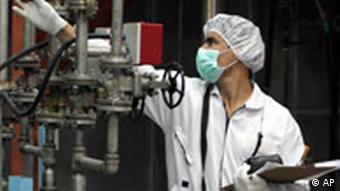 After six years of investigation, the IAEA has been unable to confirm whether Iran's nuclear program is for entirely peaceful purposes, as Tehran claims, or a cover for a nuclear weapons program, as the West fears.

Iran has stated that its uranium enrichment facility in Natanz produces fuel for a civilian nuclear reactor and not for any atomic weapons program. The country has dismissed indications that it has conducted weapons-related research in the past.

But Iran's first satellite launch in February and the announcement that its first nuclear power plant in Bushehr could go online within months have heightened proliferation concerns in many Western countries.

Tehran has ignored three rounds of UN sanctions aimed at halting its uranium-enrichment program, and has turned its back on economic and political incentives by the P5+1 offered in return for a cessation of nuclear activities.

IAEA Director General Mohamed El Baradei on Tuesday expressed "serious concern" over Iran's refusal to answer questions from the nuclear watchdog on past research that could have been related to nuclear weapons.

"In this regard, we call on Iran to cooperate fully with IAEA by providing the agency such access and information that it requests to resolve these issues," the P5+1 statement said.

Obama said Tuesday that preventing Iran from developing a nuclear weapon would diminish the need for the US to base a missile-defense system in Eastern Europe. 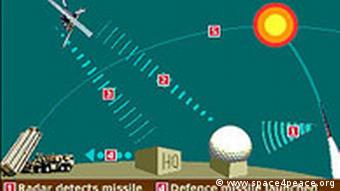 Obama commented on the planned deployment after The New York Times reported he had written to Russian President Dmitri Medvedev conveying his position. But Obama downplayed suggestions that he would give up the system in return for a stronger commitment from Russia on Iran.

"What I said in the letter was that, obviously, to the extent that we are lessening Iran's commitment to nuclear weapons, then that reduces the pressure for, or the need for, a missile-defense system," Obama said at a meeting with British Prime Minister Gordon Brown at the White House on Tuesday.

"The missile defense that we have talked about deploying is directed not towards Russia, but Iran" he said. "That has always been the concern, that you had potentially a missile from Iran that threatened either the United States or Europe."

Senior diplomats from five permanent members of the UN Security council met with their German counterparts to talk over a common strategy toward Iran. The carrot, they think, is a better option than the stick. (04.02.2009)