First Suicide Attack on German Forces in Afghanistan | Germany| News and in-depth reporting from Berlin and beyond | DW | 28.06.2006

For the first time, a suicide bomber has targeted German Bundeswehr troops in northern Afghanistan. No soldiers were killed in the attack, although two civilians were killed, in addition to the bomber, and eight injured. 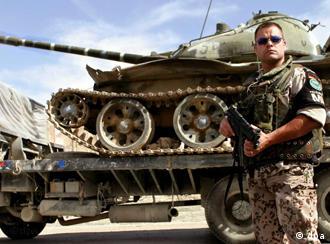 Life is getting more dangerous for Bundeswehr troops in northern Afghanistan

The attack took place on Tuesday in the northern city of Kunduz, according to a spokesman for the German military forces. The troops were on patrol in a Dingo armored vehicle when an explosive device was detonated. Among those injured were four children, reported the news agency Pajhwok.

The provincial government said that "enemies of Afghanistan" were responsible for the attack, which is an expression government circles use for radical Islamist rebels such as the Taliban. In the last few months, Taliban forces have carried out increasing numbers of suicide attacks and the overall security situation in Afghanistan has become decidedly worse over the that period of time.

The Bundeswehr took over the regional command of the NATO ISAF peacekeeping force in northern Afghanistan on June 1 and currently there are just under 2,800 Germany soldiers on the force. Thus far, 18 have been killed on the ISAF mission.

After the attack, the Afghan minister of economics, Armin Farhang, called on a broader mandate for the Bundeswehr in Afghanistan.

"The Taliban are also becoming active in the north," he told the Mitteldeutsche Zeitung daily. "The western protection forces should intervene where it's needed. They should shake things up more and not just observe. Otherwise, they'll be attacked."

According to him, the Taliban has reorganized itself and developed new strategies to fight western forces in the country.

Although northern Afghanistan has been seen until now as relatively peaceful, in southern Afghanistan, the security situation has been much more serious. On Tuesday, in the southwestern province of Helmand, two British soldiers were killed in a fight with the Taliban.

The flare-up of violence in Afghanistan comes at a bad time for German soldiers preparing to take over the international peacekeeping force ISAF this week. But the German defense minister wants to keep the troops there. (May 31, 2006)

A bicycle bomb exploded in Kunduz on Wednesday, killing two Afghans and injuring a German Bundeswehr soldier standing nearby. (Feb. 22, 2006)

German troops attached to the International Security Assistance Force (ISAF) in Afghanistan face a dangerous time in the run-up to elections, according to Defense Minister Peter Struck Monday. (Aug. 29, 2005)