Ebola patients in Liberia can now be treated in a new center set up in Monrovia with funding from German aid organizations. A German armed forces airlift will keep supplies flowing in. 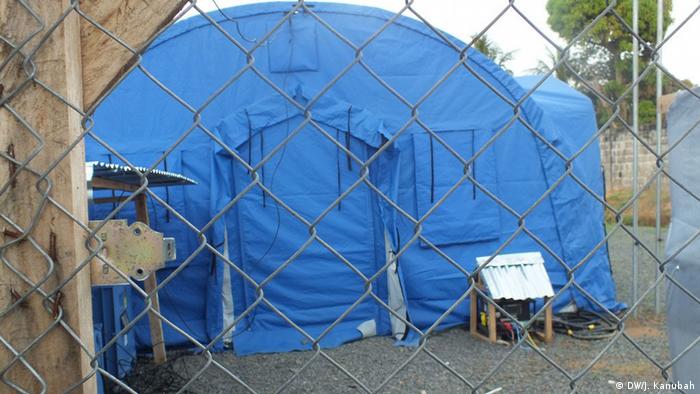 As the battle against Ebola intensifies in Liberia, a new treatment center built largely with funding from German medical aid organization action medeor has now gone into operation. The organization International Search and Rescue Germany (I.S.A.R. Germany) also contributed by taking care of customs formalities and ensuring the facility could be handed over to the Liberian government in full working order.

The center expands a Liberian government Ebola treatment unit and adds to the growing number of isolation wards being set up to combat the virus.

Located on the outskirts of the Liberian capital Monrovia, the center - which consists of two isolation wards - was constructed largely thanks to the efforts of Margret Gieraths-Nimene, a German doctor who has lived and worked in Liberia for many years and is actively engaged in the fight against Ebola. 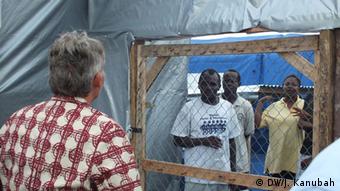 Margret Gieraths-Nimene speaks to patients at the new isolation center

Shortly after the wards were installed, Gieraths-Nimene showed a team of German military and medical staff round the new facility.

The tents were constructed in the US. Each is divided into a reception area, a room for changing clothes and an isolation/treatment area. The isolation areas are equipped with special ventilators to ensure that clean, fresh air is pumped into the ward and used air is extracted. Filters and ultraviolet radiation kill any viruses or bacteria in the used air.

The tents have a total capacity of 44 beds. George Oleko, a doctor from the Democratic Republic of Congo who has joined the fight against Ebola in Liberia, says the tents have been named "Germany" and "Africa" by medical staff.

"We decided to put stable patients in "Germany" and those still having problems are in the "Africa" tent. This means when you are very sick, weak and without strength you would remain in the Africa tent," Oleko said.

I.S.A.R. president Daniela Lesmeister pointed out that the 44 beds represent approximately 20 percent of the number which the World Health Organisation says is necessary. "Together with action medeor, we have given a clear signal in the fight against this swiftly spreading disease," she said. 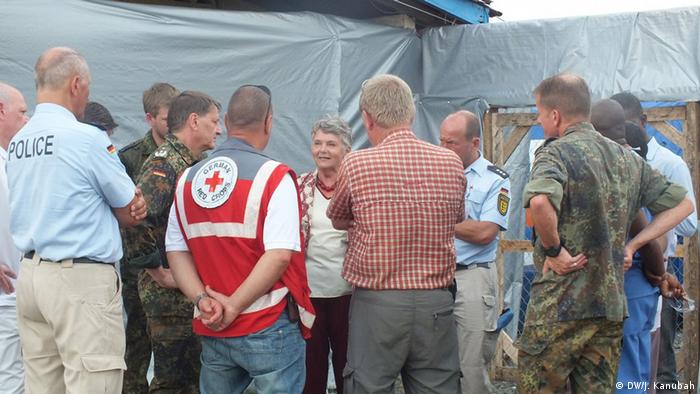 Dr Gieraths-Nimene is convinced that the construction of the two isolation wards represents a major boost in the fight against Ebola. She said that in addition to the medical treatment that can be provided, people now also had the feeling that they had not been forgotten.

"You need a positive environment in order to get healthy, and especially if you are suffering from Ebola, you are stigmatized," she said. "But now the patients have the opportunity to receive treatment. In July and August, there were no treatment centers, there were no empty hospital beds [ready for Ebola patients.] And now there are sufficient units – that is great."

One of the participants in the tour of the new facility was Claus Muchow, head of the German Red Cross (DRK) team in Liberia. Later this month the DRK plans to take over the running of another treatment center in Monrovia set up by the World Health Organization. Staff will include Bundeswehr volunteers. Last week, the first four Bundeswehr soldiers flew to Liberia, on Friday (14.11.14) five more are due to follow.

In an interview with DW, Muchow paid tribute to the efforts of Dr Gieraths-Nimene to ease the suffering of Ebola patients and improve their chances of recovery.

"I am really impressed with what Margret has done," he told DW. "There are a lot of things put in place to cater for the patients here so that they don't have to suffer." 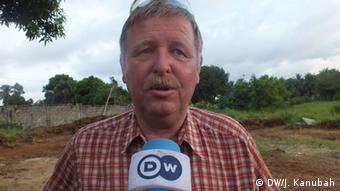 Claus Muchow says the suffering of Ebola patients is being eased

For Monrovia resident and medical worker Konah Dolo, the construction of the Ebola isolation center is a much-needed sign of hope.

"It is welcome - this response was what the Liberian people were looking for," he said.

Critics say the German government's Ebola aid has been too slow in coming. The first cases of the virus were reported in Guinea back in March. By early September, the total of cases in Guinea, Sierra Leone and Liberia stood at 3,500. The number now exceeds 14,000.

Since mid-October the German armed forces, the Bundeswehr, have flown medical equipment and food to the three worst affected countries, Liberia, Guinea and Sierra Leone, on board two Transall transport planes In forty flights, a total of 160 tons of supplies has been delivered so far. Many German aid organizations also benefit from the airlift. Action medeor will soon also be using it to fly in protective clothing and medicine for the new isolation wards.

Altogether, the German government has pledged aid worth 100 million euros ($124 million) for the fight against Ebola. The money began flowing several weeks ago – much to the relief of organizations such as action medeor. "The aid from the German government is necessary, because the amount of money being donated by the German people is still very low," action medeor worker Ulrike Schwan told DW. The construction of the new treatment center in Monrovia cost around 580,000 euros. Without a generous donation from the Else Kröner Fresenius Foundation, the project could not have been implemented. "In such a crisis situation, it is vital to react as quickly as possible," Schwan said, in an indirect reference to the German government's belated response.

Liberia has ended emergency measures, which the government imposed three months ago amid a rapidly growing Ebola epidemic. The virus still poses a threat, but Liberia says it has the situation under control. (13.11.2014)

Ebola clinical trials to begin within a month

International medical organization Doctors Without Borders has announced plans to begin clinical trials aimed at finding a more effective treatment for Ebola. The disease currently kills about half of those infected. (13.11.2014)

Ebola continues to ravage West Africa and has claimed almost 5,000 lives. Germany's special representative on Ebola, Walter Lindner, 57, says the emphasis now should be on defeating the virus, not on past omissions. (10.11.2014)