First Ebola clinical trials to begin within a month

International medical organization Doctors Without Borders has announced plans to begin clinical trials aimed at finding a more effective treatment for Ebola. The disease currently kills about half of those infected. 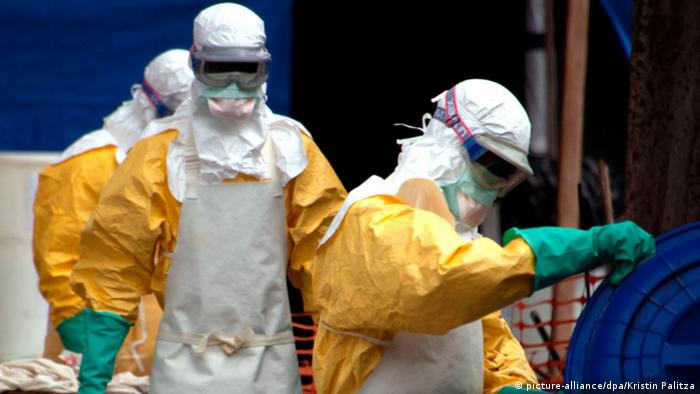 Clinical trials to help find a treatment for the deadly Ebola virus will begin within a month, the global aid agency Doctors Without Borders (MSF) said on Thursday.

Separate trials will be led by three different research partners and involve the UN World Health Organization (WHO) and health officials in affected countries.

"This is an unprecedented international partnership which represents hope for patients to finally get a real treatment against a disease that today kills between 50 and 80 percent of those infected," said Annick Antierens, who is coordinating the trials for MSF.

The first of three trials are due to start in December and results could be available by February next year, MSF said.

"If we're going to find a treatment, we have to do it now - which is why we have to accelerate these trials," said Peter Horby, the chief investigator for the trial led by Britain's Oxford University, which will test the antiviral drug brincidofovir in Liberia.

A second trial will be conducted by France's National Institute of Health and Medical Research using the antiviral drug favipiravir in Gueckedou, Guinea, and the third trial, testing "convalescent whole blood and plasma therapy," will be carried out by Antwerp Institute of Tropical Medicine in Guinea.

The aim of the trials is too speed up efforts to find a therapy to the hemorrhagic virus, which has killed more than 5,000 people out of around 14,000 known cases since December.

There is currently no established drug for treating Ebola, which in the current outbreak is killing between 50 to 80 percent of those infected.

MSF said that the target for a successful trial is for the patient to survive for two weeks, adding that no one would under go trials without informed consent.

The Pentagon has scaled back the number of troops it will deploy to Liberia, citing satisfactory infrastructure available within the country. Meanwhile, the UN has raised its Ebola death toll count. (12.11.2014)

Malian health officials have confirmed that two more people - a patient and the nurse who treated him - have died from Ebola. The fatalities are not linked to the case of a young girl who died of the illness. (12.11.2014)

New York City officials have announced that an American doctor who has been treated for Ebola has been cured. Dr. Craig Spencer is set to be released from hospital on Tuesday. (11.11.2014)