After singing the role of the baroness in the stage production of "The Sound of Music," Eunice Gayson went on to be the first Bond girl in 007's screen debut. She elicited the response "Bond, James Bond" in "Dr. No." 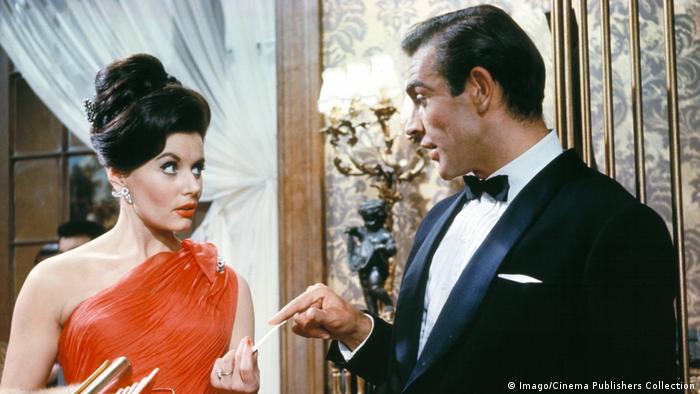 Eunice Gayson has died at the age of 90.

The James Bond franchise's producers Michael G. Wilson and Barbara Broccoli wrote, "Our sincere thoughts are with her family."

Gayson was set to play Miss Moneypenny, but that part went to Lois Maxwell instead.

But she is the only Bond girl to have featured in two films, also appearing in the 1963 film "From Russia with Love," also with Sean Connery.

Speaking in 2012, Gayson said that getting Connery to deliver the famous line "Bond, James Bond" in response to her introduction of her own character as "Trench, Sylvia Trench" took some tutoring.

"I'd known Sean for years and I'd never seen him so nervous as he was on that day because of all these delays," Gayson said.

The film's director told her to take Connery out for a drink, which she did, bringing back a relaxed actor easily able to deliver the line.

From London to Jamaica for 'Dr. No'

Gayson was born in Croydon, south of London, in 1931. Her own voice was never heard in the Bond films. She had performed the role of the Baroness in the stage production of "The Sound of Music," and appeared in the Hammer Horror 1958 "Revenge of Frankenstein" film. However, her lines in "Dr. No" were voiced over by Berlin-born actress Nikki van der Zyl, who still works, aged 83, as an artist, poet, and public speaker.

While Gayson's character was intended to return for later films, the director of "Goldfinger," Guy Hamilton, decided against the idea.

Her daughter appeared in a casino scene in "GoldenEye," the 1995 Bond film.

Gayson played other roles, such as in the British secret agent TV series "The Avengers" in the 1960s, and wrote her autobiography in 2012.

The Oscar-nominated British filmmaker directed three classic movie about the fictional British super spy and also helped launch the career of actor Michael Caine. Gilbert was one of Britain's most prolific directors. (28.02.2018)