Computer games combine film, music, literature and more. Some emphasize quality visuals and a good story. DW reporter Ananda Bräunig went looking for those at the Gamescom and the Platine festival. 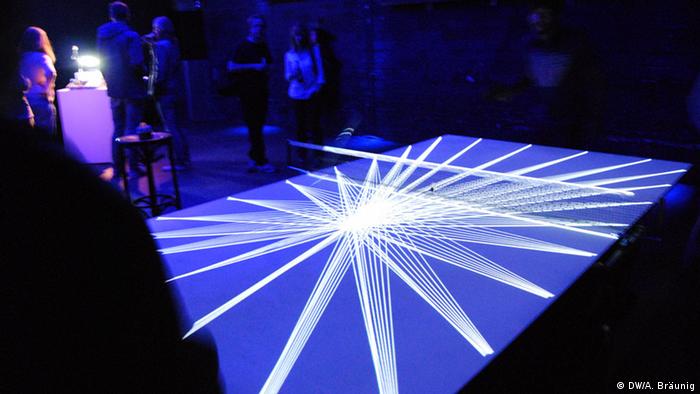 Countless rows filled with blinking computers, giant TV screens and booming sounds: Over 800 exhibitors from more than 45 countries are promoting the latest innovations in the games industry at the Gamescom in Cologne. A loud landscape of digital games resounds in the 190,000-square-meter exhibition hall.

Among all the new role-playing games, revamped retro games or virtual reality installations are candy-colored bouncy castles and even a massive army tank.

In all this, my mission is to find games with added cultural value.

The Gamescom is like a huge library: All genres are represented, but not all books are prizewinners. Yet without a doubt, all of them are cultural productions. "Films are culture, literature is culture, and of course games, as all other forms of media, are culture too," says Thorsten Unger, director of the association GAME e.V.

The German Games Industry Association has been a member of the German Cultural Council since 2008. The games industry cannot lean back on a century-long tradition: "We must therefore position ourselves for the future," says Unger. Computer games not only combine elements of literature, music and film. They add interaction.

But how to determine the cultural value of a computer game?

The perceptions of the users are key: "I'm impressed by games with an emotional story, and it's all the better if they have provocative edges," says Dieter Schoeller, managing director of Headup Games, a German publisher that promotes subculture in the games world. 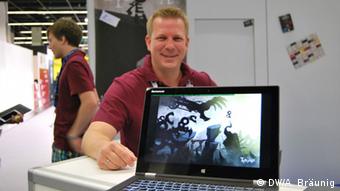 Adventure and poetry meet in "Typoman"

Headup Games published "In Between" for example. Produced by Gentlymad, an independent studio, it won this year's German Computer Game Award. "In Between" explores difficult phases in the life of a terminal cancer patient, aware of impending death. The Computer Game Award jury described it as "a varied and profound game, with a high artistic value and visual quality."

Headup Games also published "Typoman." Developed by Brainseed Factory, it won various awards, including that of the Games Connection America 2015.

Described as a "puzzle platformer," this one turns the player into a hero fighting with words formed by letters he finds along the way. A word like "hate," for example, can be turned into "heat" - and suddenly the player can win against an opponent by attacking with a heat wave. In September, "Typoman" will be released for Wii U. 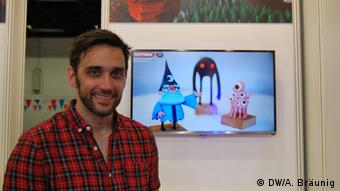 Like "Shaun the Sheep," but a computer game: "Fatpebble"

Games also reflect the cultural characteristics of individual countries. This year, the UK is the official partner country of the Gamescom. Great Britain is one of the largest markets for the computer and video games industry and an important game developers hub in Europe.

Among the British exhibits, one stands out: A cardboard version of the Queen presents "Fatpebble," developed by Handmade Games. A team of 12 young people invested much patience and energy in its design; the game is modeled with plasticine. "It's fun, it looks great and it stands out," says Michael Movel, the director of the company.

The stop-motion technique used in "Fatpebble" has a long tradition in the UK. "Shaun the Sheep," "Wallace & Gromit" and "Bob the Builder" are all made out of clay. "It doesn't matter if you're a hardcore gamer or neophyte. This game reminds everyone of their childhood, and that makes people happy," says Movel.

An Iranian game for couples

This year, even Iran is represented at the event with the Iran Game Development Institute. "The Iranian game industry has developed greatly recently, and we aim to gradually reach international markets," says Chief Business Officer Ahmad Ahmadi. 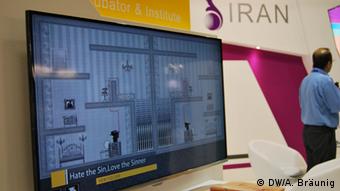 One of the products he is presenting at Gamescom is "Hate the Sin Love the Sinner," honored at the Game Connection Asia and the Game Festival in Tehran in 2013 for its artistic style.

In this platformer game, a husband and a wife have fallen out love and live in a parallel world. The design looks like a silent film. After spending several levels fighting each other, the couple gets back together in the end. "Iranian gamers have a different taste. The art is different because the society and the religion influencing it are different," says Ahmadi. 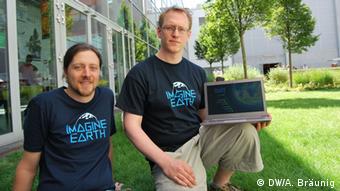 As such, a game promotes cultural thought: The player can develop his skills to move freely, think ahead and act.

This is also the basic premise of "Imagine Earth." Designer Jens Isensee and programmer Martin Wahnschaffe came to the Gamescom to find inspiration to further improve the game, which they have been developing for several years.

With "Imagine Earth," the player builds colonies on a strange planet. In a real-time simulation setup, players learn how their actions affect the environment. "Players directly experience what climate change means. For many, the issue is too big and too complex to grasp. Here it demonstrated in an interesting and simple way, through play," says Isensee.

This game was financed in part with cultural funds and in part through crowd funding. The unfinished game is already available on the online platform Steam, and users' comments will contribute to its further development. 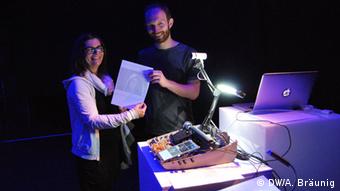 During the Gamescom, avant-garde game artists gather in Cologne's Ehrenfeld district for an event called "Platine." This festival for electronic arts and alternative game forms shows works that can be described as "somewhere in the grey zone between games and art."

Russian artist Dimitri Morozov, who works under the pseudonym "::vtol::," prints ASCII-art portraits with an old Brother sx-400 computer printer. A webcam takes a picture of the visitors and translates it into the 7-bit-character code. Printing a portrait takes 20 minutes.

Beside the portrait machine, visitors can play ping pong on a table illuminated by a video which reacts to the movements of the ball.

The exhibition goes on in several buildings throughout the neighborhood. In a bunker nearby, art works made with Teletext elements are on display, along with a bike propelled in circles by a motor and interactive paintings projected on the wall. "This scene is very small, but it exists everywhere - in Russia and all around the world," says Morozov.

The gaming industry in Germany is not doing as well as it could. And that's attributable to unsatisfactory playing field for which quite often policymakers are to be blamed, opines DW's Jörg Brunsmann. (06.08.2015)

The German city of Cologne is currently hosting Gamescom, the biggest computer and video game event in the world. DW takes a look at the worldwide digital games market and new developments in this fast-growing sector. (03.08.2015)