Finding Faith in the EU Constitution | Europe | News and current affairs from around the continent | DW | 23.03.2007

What roles does Christianity have in the EU constitution? It's an issue that divides member states down the middle as they work towards ratification. 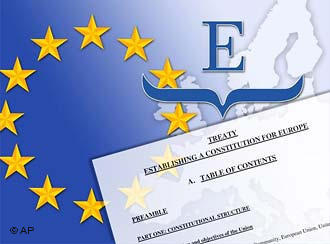 Endless wrangling over the EU constitution

When she took over the rotating EU Presidency in January this year, German Chancellor Angela Merkel declared it her aim to revive the EU constitution, but she also opened another can of worms, reviving the debate on whether to mention Europe's Christian heritage in the proposed constitution.

Following a meeting with Pope Benedict XVI in 2006, Merkel reaffirmed her support for a Christian values clause.

"I believe this treaty should be linked to Christianity and God because Christianity was decisive in the formation of Europe," she said.

Two sides who can never agree 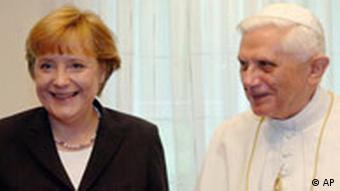 The debate around Europe's common history and beliefs polarizes Christians and Secularists. Christian Democrats Hans-Gert Pöttering, the German MEP who took over the European Parliament's presidency in 2006, sees his Christian faith as intrinsic to his politics and stated the EU constitution was a "holy text".

Pöttering is the leader of the European People's Party, a grouping which is the largest Europe-wide party in the parliament and a coalition of center-right, Christian democratic national parties.

Staunchly Catholic Poland also made it clear that it would like to see Christian values enshrined in the constitution as did seven other national governments who were pressed on the subject -- Italy, Lithuania, Malta, Portugal, Czech Republic, Slovakia and Ireland.

Ultimately however, they found themselves in the minority, and the compromise position reached by the EU was a simple reference to Europe's "cultural, religious and humanist heritage."

Committed believers won't give up 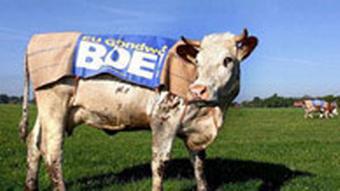 The Dutch (and their cows) voted no.

That proponents have refused to fall silent following their defeat on this issue, is an indication the passion the Christian values debate arouses. Opponents are just as committed to keeping the so-called "god clause" out, and they are frustrated at the revival of a battle they thought had been won.

"The chancellor's statement brings into question once more a compromise that was difficult enough to achieve. It is not helpful to reopen a discussion that has been closed," said Martin Schulz, the German MEP and Socialist leader in the European Parliament, following Merkel's statements.

Because this debate centers on personal belief, both sides struggle to make concessions or understand conflicting viewpoints. Dr Jan Palmowski, Senior Lecturer in European and German Politics at Kings College, London says it is "hard for secularists to understand why those who feel so strongly about religion cannot compromise."

The EU constitution, drafted by the European Convention amid furious wrangling in 2004, is in a state of political limbo after being rejected by the French and Dutch in referenda held in mid-2005. Proponents of the constitution argue it is necessary to give the EU workable mechanisms for reaching decisions.

Palmowski also argues, as do other commentators, that there is the political question of Turkey's application for EU membership in this debate. If Europe is defined as being Christian, then clearly Islamic Turkey isn't a European country. And while Merkel has stressed that she doesn't believe that the European Union is a "Christian club", conservative opposition to Turkey's membership is well-known.

Many don't want to talk about it 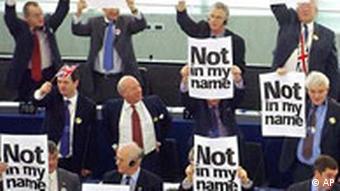 European parliament agreed on the text, but not without discontent from some.

Defining who is and isn't entitled to be called European also concerns the European Network against Racism (ENAR), a network of NGOS across EU member states.

"There is no denying that Christianity has made a decisive contribution to European identity, but then so has Judaism and Islam, both present for centuries on European soil," said ENAR Chair Bashy Quraishy, who would like to see all religions included or none at all.

But despite passionate debate, the members recognise that the constitution has a is about more than just values. "Religion not a make or break issue here," Palmowski says. "Even in 2004 the tensions were really about the weighting given to Spain and Poland in the voting structure, religion is not a decisive factor."

Hanneli Ebding, Director of Federal Europe, an independent NGO lobby in Brussels for the constitution in its present form, doesn't see the religion debate intruding on a practical level. "It's just not being visibly discussed," she said.

Most analysts believe that the defeats in France and the Netherlands were as a result of dissatisfaction with the constitution's plans for expansion of members, the Euro-zone, and national governments. Statements about religion do not seem to have been a significant factor. The French were demonstrating their discontent with President Jacques Chirac, while many Dutch felt that European integration was moving too fast.

Merkel has declared she will use Germany's presidency of the EU, which it holds until the end of June 2007, to get the constitution back on the rails. She faces a tough sell even without the "god clause" issue, with the Czechs, Poles, British, Dutch and French expected to be the most difficult countries to win over, she may be hoping for divine intervention.

German plans to put forward new proposals on the stalled EU constitutional process drew support from Denmark but hesitancy from the Czech Republic Tuesday. Berlin will likely have to lower the bar. (27.02.2007)

Germany Wants to Bring EU Constitution Back to Life

Germany takes over the EU presidency in 2007 and is writing its to-do list. The EU constitution is at the top, said German Foreign Minister Steinmeier, over a year after it was shot down by French and Dutch voters. (06.09.2006)