Last year was rough for many, and that included manufacturers in the furniture industry. Retailers, however, saw a slight improvement. As the Cologne furniture fair gets underway, the industry is cautious but hopeful. 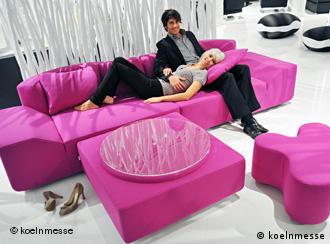 Power colors are making a splash at the furniture fair

The international furniture fair IMM Cologne is one of the few consumer goods conventions in the world that has been able to buck the trend and stay stable, according to Gerald Boese, head of the city's convention center.

This is the first major trade fair of the year in Germany and, considering that it comes on the heels of an economic crisis, it is doing quite well with 1,053 exhibitors representing 51 countries. That is an increase in one percent from last year.

Furniture, kitchen and other design specialty shops did surprisingly well last year, despite the global finance woes. Germans spent almost 30 billion euros ($42.5 billion) on furniture and kitchens in 2009. That is in addition to the 6 billion euros they laid out for carpeting, household textiles and accessories.

Thomas Grothkopp, spokesman for the German furniture retailers said that was a slight increase over 2008 and attributed it to furniture shops' effective competition strategies.

"And we did it without government subsidies or scrapping incentives," he added. 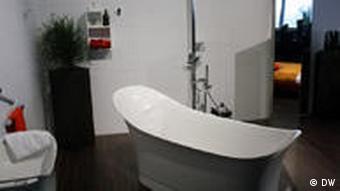 A new trend for 2010: bathtubs in the bedroom

Grothkopp is not able to estimate just how much purchasing power was taken away from the furniture shops by the multi-billion euro government subsidies provided to the auto industry. However, he thinks that in uncertain economic times people tend to put priority on home and family.

"People would rather invest in long-lasting consumer goods than in dubious investment projects worked up by banks," he said.

And while the future is always a little uncertain, Grothkopp said he would be happy if the 9,400 furniture shops in Germany, which employ some 100,000 people, manage to bring in roughly the same amount of money as they did last year.

Of course, for every winner there is a loser. While those selling their products did well, the German furniture and kitchen manufacturers themselves suffered a 10-percent, or 14-billion-euro, cut in profits last year. The sector had been experiencing record growth from 2004 to 2008 but the force of the financial crisis put a stop to that, said Dirk-Uwe Klaas, head of the German Furnishings Industry Union.

However, Klaas said that in comparison to other industry sectors, which have suffered an average loss of 20 percent, the furniture manufacturers got off relatively easy. 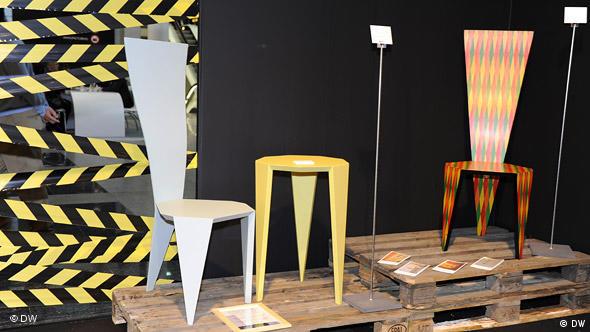 The industry is cautious but hopeful

The demand for office and shop furnishings has decreased by 17 percent, which is typical for a recession. Demand from abroad has also decreased by about the same amount. Dirk-Uwe Klaas hopes this will turn around.

"After all, the technology, design and quality that is sought after in German cars and machines is equally present in German furnishings," he explained.

Klaas estimated that really anything between negative three and positive three percent in sales figures is entirely possible for the nation's manufacturers.

Leading market research group GfK announced Tuesday that the mood among German consumers would continue to deteriorate at the end of the year. Researchers put a large part of the blame on rising energy prices. (22.12.2009)

After satisfying German demand for mail-order goods since 1927, Quelle is to close for good. Along with department-store chain Karstadt, it is a high-profile victim of parent company Arcandor's bankruptcy. (20.10.2009)

Russian authorities have launched a crackdown on the religion following a Supreme Court ruling that it is an 'extremist' organization. Rights groups say hundreds of believes have been imprisoned or are facing trial.

German police have carried out searches on several apartments after nine officers were suspected of taking part in extremist Whatsapp groups. The raids occurred simultaneously in the state of North Rhine-Westphalia.