Fighting rumbles on in Tripoli in wake of militia attack

Fresh fighting in the Libyan capital of Tripoli has led to more deaths. It came a day after 43 people were killed and more than 400 injured when a militia group opened fire on a group of protesters. 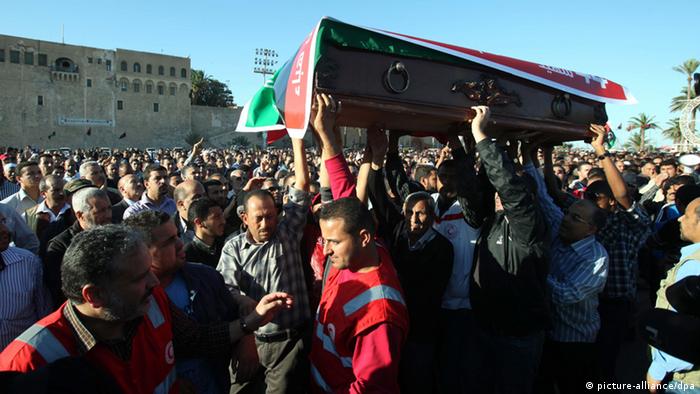 Saturday's violence began at dawn after militiamen from Misrata raided a base in the Tajoura neighborhood, taking arms and ammunition and exchanging fire with government-aligned troops.

Government-affiliated militia and residents responded by establishing checkpoints along the road from Tajoura to Tripoli's city center. There, thousands gathered to mourn the deaths of the protestors, who came under fire from Misrata militiamen after approaching the group's headquarters on Friday.

Waving white flags, they had demanded the country's weakened security forces restore law and order. Witnesses said armed men came out of the militia group's buildings and began shooting at the protestors. A three-day mourning period was declared in the wake of the attack.

Dozens of protestors were killed and hundreds wounded in militia violence in Tripoli. Public anger is aimed at a weak government. Now, more militia fighters are marching toward the capital to fill a power vacuum. (16.11.2013)

Prime Minister Ali Zidan called for "restraint and a halt to clashes," saying the presence of more armed groups in Tripoli's city center could "further complicate the situation."

"The coming hours and days will be decisive for the history of Libya," said Zidan, who had last week urged citizens to "take to the streets … and support the building up of the army and police."

The demonstrations were the strongest showing of the increasing public discontent with militia groups in Libya. Since the fall of dictator Moammar Gadhafi, militia groups have sprung up around the country and have sought to profit amid an air of lawlessness under the General National Congress.

Many of the militia groups draw government funds, but have refused to be incorporated into the country's official security forces. The groups have been handed a December deadline to fall into line or risk having their paychecks stopped, but have seen out such threats before.

The violence has caught the attention of the United States, with Secretary of State John Kerry echoing the calls of Zidan: "We are deeply concerned by the death and injury of many Libyans in recent clashes in Tripoli," he said in a statement.

"We condemn the use of violence in all its forms and urge all sides to exercise restraint and restore calm."