Germany's culture commissioner has said that curbing "IS'" finances can be done by clamping down on looted artifacts reaching German markets. Her comments come as the UN seeks new ways to impede terrorism financing.

Grütters: 'We must act against this trade'

Stolen art is said to account for the third most common business activity in the world of organized crime.

The "Islamic State" militant group has profited from looted artifacts, which contributes to financing their operations in Syria, Iraq and elsewhere, according to the UN. 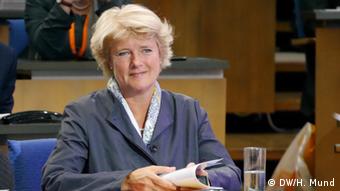 Monika Grütters, art historian and German federal government commissioner for culture and the media, says she is working towards curbing such financing by pushing for stricter regulations on artifacts entering Germany.

"But we can do one thing primarily: we know that stolen artifacts from other countries are still finding their way into Germany as well, and to at least prevent looted artifacts from coming into the country or being traded here, we would like to see stricter regulations on imported goods than was previously the case," Grütters noted.

The culture commissioner noted that while UNESCO has had a convention for internal conservation in place since 1970, Germany had not joined the convention until 2007, when it ratified it.

UN votes to disrupt oil and antiquity sales by 'IS'

The UN Security Council has unanimously approved new sanctions against 'IS.' The UN is trying to block 'IS' access to the purchase of oil equipment, weapons and communications.

But Germany is now witnessing a paradigm shift concerning tighter regulations on cultural goods, she added.

"In the future, only goods that have proper documentation from the countries of origin will be able to enter Germany," Grütters said.

"Until now, that has not been necessary, and now Germany is at least in the process of implementing these import regulations in a new way. That's a paradigm shift, and as such, we're catching up with international standards," she added.

Grütters: 'We must act against this trade'