FIFA boss Gianni Infantino has been cleared of corruption allegations by the football regulator's independent ethics committee — but he remains under investigation by Swiss authorities. 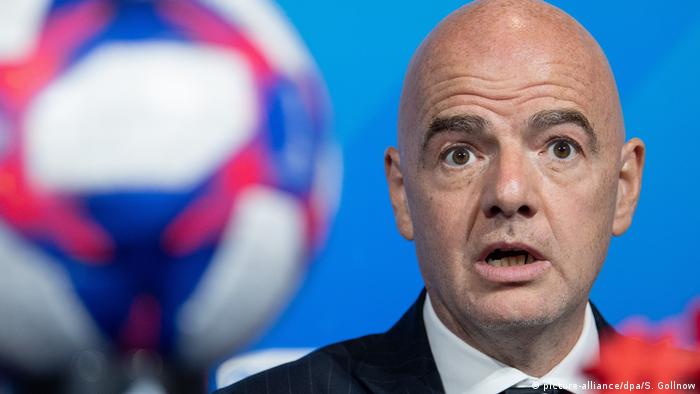 The ethics committee received a complaint on June 21 regarding meeting between the FIFA chief and Swiss Attorney General Michael Lauber. They received documentations from Swiss authorities and courts.

"All of this material has been duly scrutinized by the chairperson of the investigatory chamber in the context of the preliminary investigation," the committee said in a statement.

"Based on the information available to date, no aspect of the conduct analyzed constitutes a violation of the FIFA regulations," it added.

What is Infantino accused of?

FIFA's ethics committee had launched preliminary investigations into several alleged transgressions, including a FIFA-booked private flight from Suriname to Geneva, and secret meetings between Infantino and Lauber.

"There is no factual basis whatsoever for this criminal investigation," FIFA deputy general secretary Alasdair Bell told a news conference this month, describing the investigation as "grotesque" and "absurd."

Infantino was elected in 2016 to replace Sepp Blatter, who was the subject of criminal proceedings in 2015.

Blatter was banned by FIFA's ethics committee, although the investigations against him are still ongoing and he has not been charged. He denies wrongdoing.

Earlier on Wednesday, the Swiss parliament dropped an impeachment case against Attorney General Lauber after he said he would step down from his role at the end of the month.

Qatar is one of the world's richest countries, but around 100 laborers from Southeast Asia and Africa working on a prestigious stadium project have not been paid in seven months, Amnesty International claims.

Australia and New Zealand are targeting a new era for football Down Under after winning the right to host the 2023 Women's World Cup. The tournament is expected to deliver a popularity boom for the sport.