A field guide for dinosaurs and prehistoric mammals? It's not as if you're going to bump into them in the high street. But you'll want to know them if you see them. DW talks to Princeton editor Robert Kirk. 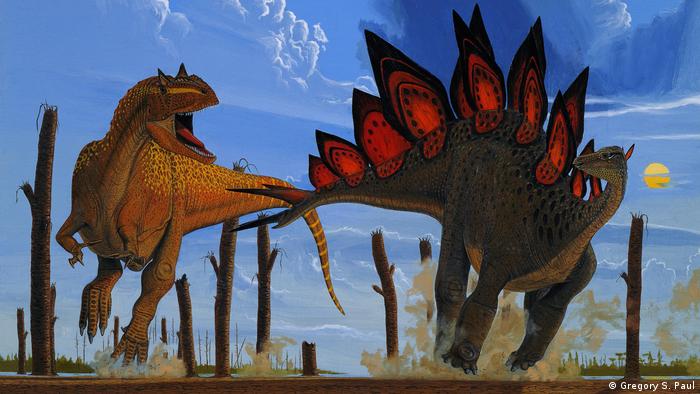 DW: I find the idea of "field guides" for dinosaurs and prehistoric mammals striking as we're not going on a safari any time soon. And yet Gregory Paul, who wrote and illustrated the dinosaurs field guide, does give us a taste of what it might be like to time travel. Which is nice, because while these are books for professional paleontologists, they also meet every kid's dream in that way. Is that how you approached this series to make them attractive for a broad spectrum of potential readers?

Robert Kirk: I've been commissioning and producing field guides for over 30 years now, and I'd always wanted to approach dinosaurs in exactly the same way as you would a modern field guide to living organisms. Just for the hell of it. There was no such guide - a completely, taxonomically structured book - and in a way, you're literally running through the families as you might through a bird guide. That's much harder with dinosaurs because there's tremendous controversy about the actual taxonomy of these things. But, as far as we could, I wanted to mimic a contemporary field guide. We have no idea what some of these things looked like, we have no idea what color they were … But Greg's great strength are these amazing reconstructions he does, sometimes from a complete collection of bones, sometimes from two or three bones. And they give the reader a visual survey of the entire world of these extraordinary beasts. 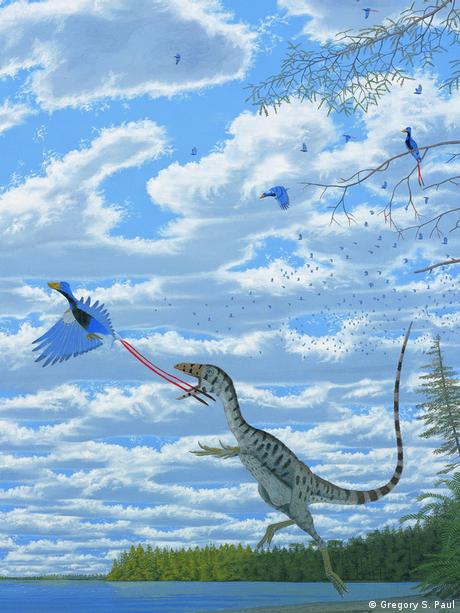 It is very visual as you say, and Gregory Paul makes a point of there being this new generation of artists giving dinosaurs a "new look" to make them appear more dynamic. But it's also very refreshing to hear you say there's controversy about how the dinosaurs looked, that we don't even really know what colors they had, and the most mind-boggling thing to me is how we presume to know which were more intelligent than others. It's an incredible field.

There's a funny story about that, when we were just about to go to press. There's a guy at Yale called Rick Prum, who does this extraordinary research on feathers. And he was able to use a recent Chinese fossil find - a dinosaur feather - to determine through really snazzy-whizzy stuff the color of feathering on that dinosaur. So Greg had painted it green, or something, but actually it was black and white, so we had to change that because it was going to be published in "Nature" or "Science" that that was the color of this particular beast. It was the first time it had ever been done, I think. 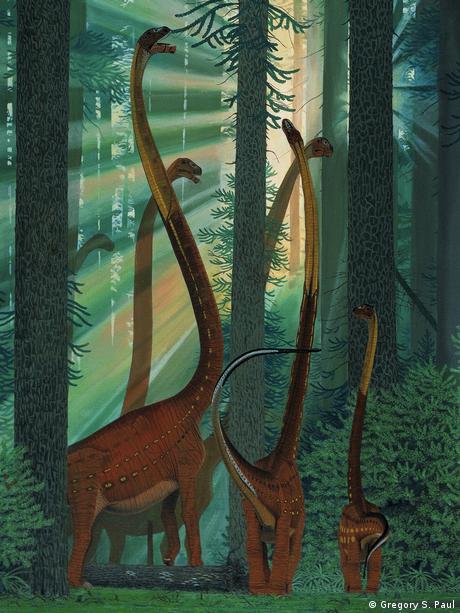 No need for low-hanging fruit: an unnamed genus tianfuensis gets a feed

Greg has a sort of begrudging respect amongst professional paleontologists - he's not a professional, he's just an amateur with an extraordinary enthusiasm. He has always believed that all dinosaurs were feathered - that they had vestigial feathering of some kind - so, T-Rex would have something on its shoulders, etcetera, and clearly he was right. Those recent fossil finds over the last five years in China are really bringing home the truth of that. There was this old argument that birds were special, that they were a separate lineage from dinosaurs, you know, all the bird-folk were like, "Oh, no, they're not dinosaurs!" But, clearly, birds are dinosaurs. 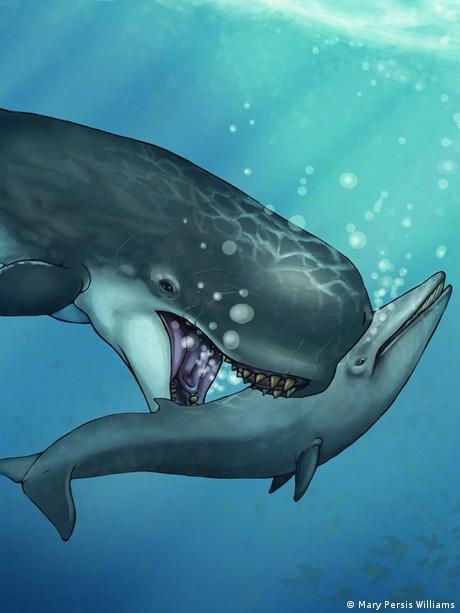 Size (and sharp teeth) matters: a Livyatan preying on a smaller whale

When I look at the geologic time scale, and see where dinosaurs and prehistoric mammals fit in, it reminds me of how insignificant humans are. The dinosaurs existed for about 150 million years, and what are we compared to that?

Right, and we use the term "dinosaurs" as pejorative, but actually, compared to us, they were an enormously successful bunch of organisms from, what, 300 million through to 65 million, and it was only because a meteorite hit Earth that it ended there. 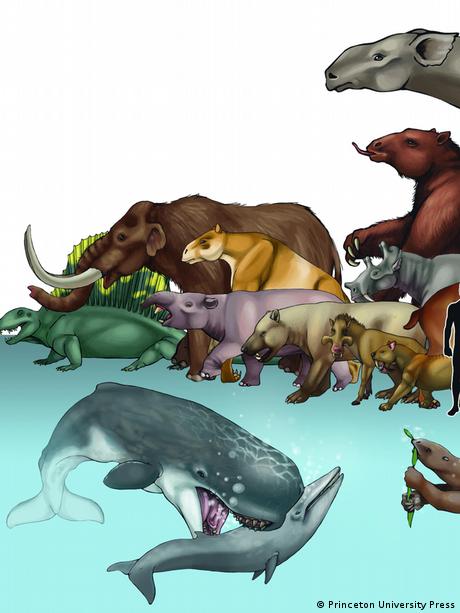 Given that, how can we learn to be less precious about our own existence? Both Gregory Paul and Donald Prothero, the author of the prehistoric mammals field guide, put their subjects in a broader context, and they talk around various theories, which I really enjoy. There's a lot on the extinction of these beings - was it an asteroid, or was it volcanoes? But life always goes on. So surely that same context can help us realize that when we're gone, something else will come.

Right. I think that's a very good point. You do look at those eras of life on Earth and … you know, microbes win! They were there at the beginning and they'll be there at the end. It's an interesting question in biology - the question of success. What is a successful organism? I think most biologists would definitely hand it to microbes. They're simple, ridiculously numerous, they just plod on, adapt, they've been here for 3.5 billion years, and they'll be here way after us. So, yes.

We're so full of hubris and arrogance, and you do have to say, "Well, it's pretty likely we won't be here in another 500-800 years, the way we're going. Maybe even shorter than that. It's unsustainable, really. But, as you say, something else will take over. There will be regeneration of some kind. It's sort of reassuring, in a funny kind of way, that whatever we do, something will take over. I find that comforting. 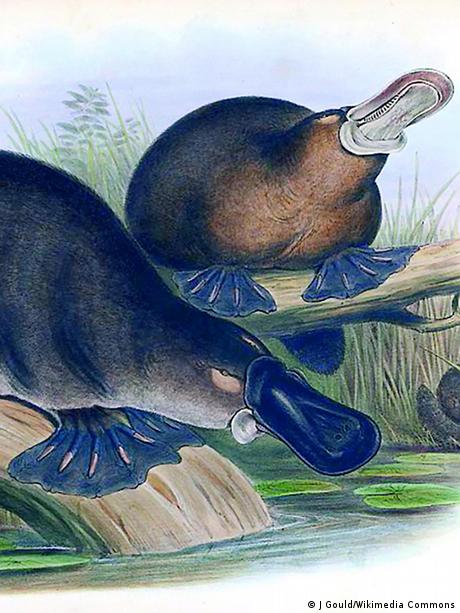 Scientists recently suggested we needed to create a new era, that the holocene was over and that we needed to name this era the anthropocene, because of the impact humans have had. How do you feel about that?

I understand that. And in scientific terms it's both valid and totally invalid, I think, because the previous era were comparatively, very long stretches of time, and we have been around such a short time. But it's a good thing to do because it hammers home the fact that mankind has made more significant changes to the planet than any previous order of animals. Perhaps except microbes! 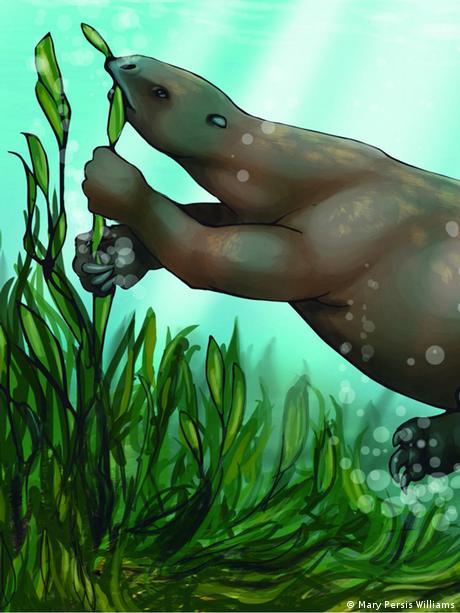 The swimming ground sloth Thalassocnus, from the Miocene beds of Peru

Science gets lucky break with feathered find in Myanmar

The well-preserved tail of a small dinosaur has been discovered at a market in northern Myanmar. The feathered appendage, which was about 99 million years old, was preserved in a piece of amber the size of an apricot. (09.12.2016)

Brazilian scientists say they have discovered relics of the largest dinosaur ever to have been found in the country. Bones from "Austroposeidon magnificus" were unearthed decades ago but not studied until recently. (07.10.2016)

Famous dinosaurs you can visit

It's "Jurassic Park" in Berlin. In the film, the T. rex was overcome by the Spinosaurus. But at Berlin's natural history museum, the two dinosaurs will stand peacefully side-by-side for the next four months. (09.02.2016)