Hatice Cengiz and US-based group DAWN have filed a civil suit, pursuing the Saudi prince and 28 others for damages. Khashoggi was murdered two years ago when he entered the Saudi consulate to obtain marriage papers. 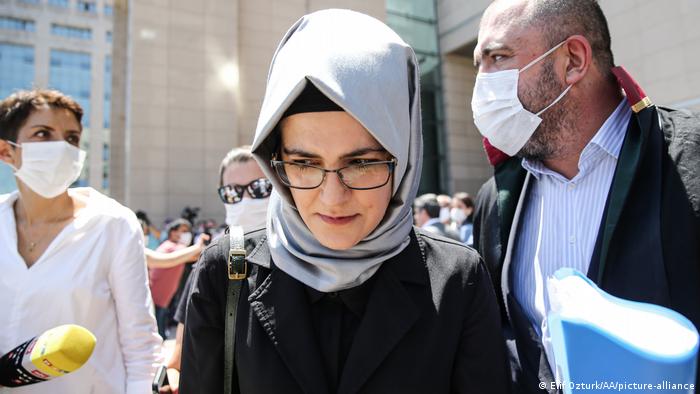 The fiancee of murdered journalist Jamal Khashoggi and US-based non-profit Democracy for the Arab World Now (DAWN) are suing the Saudi prince, in a court action that began on Tuesday.

Turkish citizen Hatice Cengiz, along with DAWN, filed a civil suit in a US court pursuing Prince Mohammed bin Salman and 28 others for damages over the killing of the US-based writer two years ago.

A staunch critic of the Riyadh regime, Jamal Khashoggi was a Saudi Arabian journalist and columnist. On October 2, 2018, he entered the Saudi consulate in Turkey to obtain marriage papers, but was never seen leaving.

According to Turkish authorities, a team of Saudi nationals, including a forensic doctor and intelligence officers, flew into Istanbul and met Khashoggi at the consulate. He was then killed and his body, which was dismembered, has still not been found.

Lawsuit in the US

"Jamal believed anything was possible in America and I place my trust in the American civil justice system to obtain a measure of justice and accountability," said Cengiz.

Cengiz claimed personal injury and financial losses, while DAWN said its operations were hampered by the loss of their founder. "The ruthless torture and murder of Mr. Khashoggi shocked the conscience of people throughout the world," the suit said.

The suit seeks damages, and the amount would be determined by the jury. Since the conspirators are based outside the US, the lawsuit is expected to face difficulties.

After international outrage following Khashoggi's murder and pressure from Turkey and the US, Saudi Arabia had sentenced eight people to prison. The trial had concluded that the murder was not premeditated.

Two top royal aides were exonerated despite links to the murder. Cengiz had slammed the outcome of the case.

Khashoggi's fiancee said they had already wed according to Islamic traditions, and were in the process of getting a civil marriage.

The suit says that the defendants were "aware of Mr. Khashoggi's US ties and brutally killed Mr Khashoggi to silence him and prevent him from continuing in the United States his advocacy for democracy in the Arab world."