Felipe VI has been sworn in as Spain's new king. This was part of ceremonies marking the royal handover, which were kept low key out of respect for the many Spaniards suffering under economic hardship. 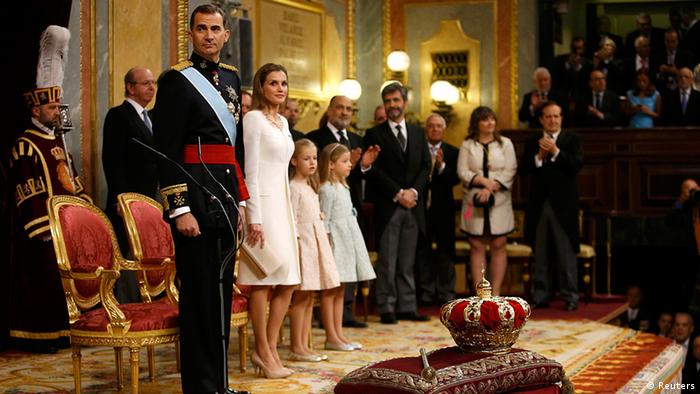 King Felipe VI, who legally ascended to the throne at midnight, was sworn in during a ceremony in Spain's parliament on Thursday. This was part of low-key ceremonies marking the royal handover, as Spain got its first new king in four decades. The ceremony was attended by lawmakers, high-level politicians and some members of the royal family. No foreign leaders were invited.

Earlier on Thursday, the outgoing King Juan Carlos, handed the 46-year-old Felipe the red sash of Captain General of the Armed Forces.

The new king took office just hours after his father had signed legislation that set out the legal framework for his abdication and replacement by his son.

The 76-year-old King Juan Carlos had announced his decision to step down on June 2. He said he was stepping aside because Spain needed the energy of his 46-year-old son to rally the country, which has long been mired in economic depression.

Juan Carlos had been on the Spanish throne since 1975 and was long held in high esteem as he helped the country make the transition to democracy following the death of dictator General Francisco Franco.

However, in recent years, King Juan Carlos saw his popularity drop amid a series of scandals involving some members of the royal family. Earlier this year, his youngest daughter, Princess Cristina, had to appear in court to testify in a fraud and money-laundering case involving her husband.

In 2012 the king himself faced widespread criticism after a photograph of him was published showing him standing in front of an elephant he had shot while on safari in Botswana.