Hunger is a problem of poverty, which, therefore, hits people in the world's least developed countries particularly hard. In these "LDCs," like the Democratic Republic of Congo, the mean annual income per person is $235. 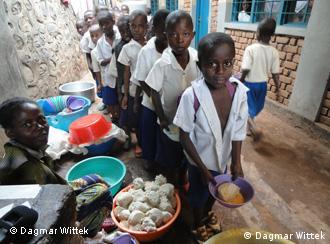 If there's any food at all, it was often sent from afar

"That's excellent, but still way below average," she concludes. 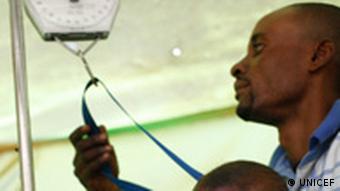 This baby with wrinkled skin and a seemingly oversized head is 18 months old and should really weigh about 11 kilograms. But when he was last in this hospital in the town of Bukavu in the east of the Democratic Republic of Congo (DRC) one year ago, he weighed barely 1.8 kilograms - and he had malaria.

"It's a miracle this youngster survived," Bahati says. This Uzima Center, along with the vitamin- and mineral-enriched "powerbrew" offered by the UN's World Food Program, has given the child a second chance at life.

"This girl here will always feel the effects of malnourishment," Bahati says, indicating a girl in a stained linen shirt that was once white. She looks far too small for a 14-year-old, which Bahati explains is a result of being continually malnourished.

"What chance will this underdeveloped girl have?" the forlorn dietician asks.

It's not just her body. Her brain has not had the nourishment necessary for normal development. It's easy to imagine how her four brothers and sisters are faring after listening to her heavily pregnant mother's life story.

"Nsimire kept getting weaker, she had diarrhea and a fever, her body was getting bloated," mother Esperance Ngabo tells Deutsche Welle. That's why she decided to walk with Nsimire to the capital of the South Kivu province and seek help. This involved several days trekking along muddy tracks barely identifiable as roads. Ngabo left her four other children behind, 150 kilometers (93 miles) away, with her sister. But there's no guarantee they are safe. 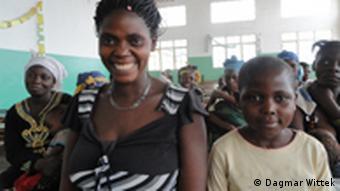 Esperance and Nsimire Ngabo are a little less hungry now

Militias often attack and loot villages in her eastern region. Thirty-year-old Ngabo was raped by them once when her husband was out - when he learned of this, he left her.

"I have lost hope," she sighs.

She says, with a resigned absence of emotion, that she is pregnant by another man, who recently died. In order to earn some money she has started to work delivering coal, sugarcane and other goods - but she doesn't know how long this will last. Ngabo arrived just a few months ago - and has known little stability in a life marked by war and constant flight from rebel forces, soldiers and militias alike.

The east of the DRC has been one of the focal points of what some people call "Africa's World War," which also involves tribes, troops and rebels from neighboring Burundi, Uganda and Rwanda. In 2002 a peace accord was signed, and the DRC's army is integrating rebels and militias into its ranks, but the region is still anything but stable.

No signs of peace

"Everyone says that peace now reigns, but I see no signs of that," Ngabo says as she waits in the UN food center so that her little girl gets her daily ration.

Esperance and Nsimire Ngabo are by no means alone. According to the UN's World Food Program, roughly 1.4 million children under five years of age are chronically malnourished. 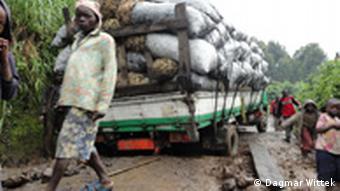 In the eastern DRC regions of North Kivu, South Kivu and Maniema, half of the population don't even know where their next meal will come from. In total, 4.3 million Congolese people are mired in famine, trying simply to survive.

The latest world hunger index classifies the food situation in 26 countries as critical, but DRC is top (or rather bottom) of the tragic league table. Roughly three in four of DRC's 70 million inhabitants are malnourished, and infant mortality rates are among the highest in the world. Burundi, Eritrea, Chad and Ethiopia are next in line - and it should come as no surprise that these are so-called LDCs, they're among the least developed countries in the world.

The mean annual income for someone in an LDC is just $235 (166 euros). Life expectancy is 51, a new-born baby has only a 90 percent chance of living to its first birthday, one in two adults are illiterate.

But since 1971, the number of countries classified as LDCs has doubled, rising from 25 to 51. Thirty-four of these countries are in Africa. Meanwhile, public development aid for LDCs has dropped by 45 percent since 1990.

But development aid is not necessarily the issue, many economists point to the problem of dependence on this money. Prominent Somali economist Nuruddin Farah, and South African Moeletsi Mbeki (brother of former president Thabo Mbeki) have demanded a stop to development aid. They say that what Africa needs is a real chance on the free market, enabled by liberalizing global trade and removing prohibitive customs duties. This, they say, would be a real step towards equality on the world market for Africa.

"We don't need cash, we here in the DRC in fact have everything we need" Esperance Ngabo says with a raised eyebrow.

DRC's inaccessible rainforests and hills are rich in natural resources

To some extent this is true. The DRC is extremely rich in natural resources like gold, copper, uranium and coltan.

Take coltan as an example: it's needed for mobile phone manufacturer and is therefore very much in vogue. It's estimated that the DRC is home to 80 percent of the world's coltan reserves. The metal is easy to mine, it can normally be found just below the earth's surface. Unfortunately most mining operations are controlled by generals, soldiers and militias acting on their own authority, trading illegally in the commodity. Bringing these problems of rogue militias, corruption and other such waste under control would transform the fortunes of the country.

But all of this is far from the current concerns of Esperance Ngabo and her daughter, Nsimire - who has just finished her free meal. It's now time for her mother to go in search of food.

The World Bank and the UN are warning of a new wave of famine. But poor harvests and Western subsidies are not to blame, rather market speculators who are driving the prices of staple foods through the roof. (27.10.2011)