Fear Borders on Hysteria as Bird Flu Hits Europe | Germany | News and in-depth reporting from Berlin and beyond | DW | 21.02.2006

While European governments aren't hitting the panic button as yet, the spread of bird flu has definitely got a lot of people fearing that the end is nigh. Bird flu psychosis is spreading faster than the virus itself. 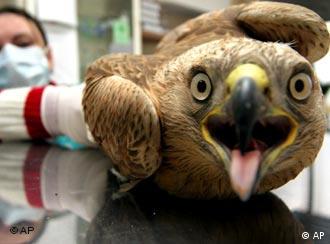 Paranoia is rife as dead birds turn up in Europe

It was a surprise that Germany's airports were not inundated with fleeing citizens; fighting each other for the last available seats to safety, panicked to distraction with only thoughts of escape passing through their fear-frazzled minds.

"The feathered death -- it has landed," blared a headline in the Berliner Zeitung newspaper heralding the arrival of bird flu in Germany last week along with, if the media were to be believed, the three other horsemen of the apocalypse.

Adding to the hysteria was the fact that if Germany were to empty its borders, where would the escapees flee to? Pestilence was everywhere. Not a corner of the globe was untouched. Poultry magnates considering the end of their empires must have seriously been considering investing their last euros in space tourism.

As the people of Europe looked to their leaders for guidance, some like Germany's Chancellor Merkel could barely hide their concern. "The situation is very serious," Merkel said after a personal visit to the northern German island of Rügen after avian flu struck there.

Everything seemed to add up to a doomsday scenario, a worldwide crisis which would sell a million copies in paperback if there would be anyone left alive to read it.

Welcome to the age of bird flu psychosis.

The lethal H5N1 virus landed in Western Europe last week for the first time, littering parts of Italy, Greece, France, Germany and Austria with the carcasses of dead migratory birds and those domestic winged victims who were unlucky enough to fraternize with the infected before they quacked their last.

A global panic six years in the making 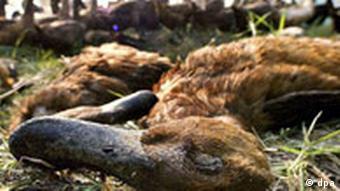 Asia's harsh lesson should have been learned sooner by Europe

It should have come as little surprise. Bird flu had been winging its way to Europe, slowly but surely, since the disease first emerged in Hong Kong in 1997. It took its time but eventually made it to Europe's borders in October when it claimed a handful of teenage human victims and thousands of feathered fatalities on its way into the EU.

Six years. Plenty of time, one would imagine, for European leaders and health experts to have some sort of plan ready. But when the first cases cropped up in Italy and Greece, the authorities were as shocked as anyone. When the northern German island of Rügen reported a batch of dead swans, it remained that way for some time because of a conflict between federal state and district laws which prevented the authorities from sending in a clean-up team immediately.

The fact that governments and health organizations around the world seem to be at a loss to stop the spread of the virus and have no tried and tested means to cure the disease once it is contracted by humans could rightly cause some concern. But the reactions of the general public, at the moment at least, far outstrip the actual threat. 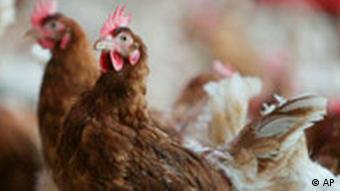 The poultry industry is beginning to feel the heat

In Italy, for instance, the threat of unemployment due to the poultry industry being hit by panic embargoes on chicken caused one delivery man to kill his wife and child and then himself in a fit of manic depression.

"He was very worried because we told him there'd be less work because of the crisis," an official from the man’s firm told the newspaper La Repubblica.

It is by far the most extreme case recorded so far but there is no doubt that a lot more people are concerned to a lesser degree. Since the beginning of last week, the Italian health ministry has received more than 13,000 phone calls to a special bird flu hotline to report dead birds or ask for advice. 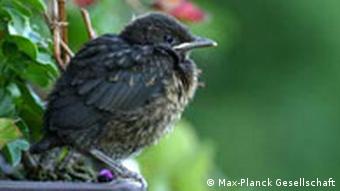 Berlin gave its fallen blackbird a guard of honor

In Germany, citizens have been urged to report dead birds to the police in an attempt to limit the impact after the Rügen outbreak spread to the mainland. Such is the concern that a dead blackbird in a Berlin suburb required what the attending fire chief called "a full state funeral" when a decontamination team in full bio-suits turned up to remove the corpse.

And help lines in Germany have been inundated with calls from concerned people.

A spokesperson for the Federal Ministry of Food, Agriculture and Consumer Protection told DW-WORLD that while there were no official caller numbers available, a conservative estimate would be in the "high hundreds." All nine hot lines, however, were constantly engaged suggesting the estimate is very conservative.

Georg Alpers, a psychologist at the University of Würzburg believes that it is the not knowing which is causing most of the panic. "We do not know at the moment what the concrete dangers are, how we could protect ourselves from these possible dangers and whether we are actually in danger. From such insecurity, fear can grow." 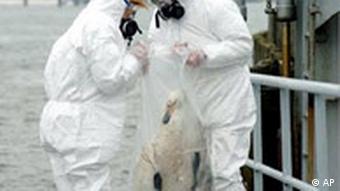 The experts deal with infected birds so you don't have to

While there is little doubt that a human bird flu pandemic is a possibility, scientists are increasingly stressing the 'if' rather than 'when' argument -- and many believe it is a large 'if'. Right now, to contract bird flu one would have to visit a contaminated area and have sustained contact with an infected bird or corpse, something most conscientious people would no doubt do their utmost to avoid.

If the disease were to mutate into a version that could pass easily from one person to another -- the main fear of health experts -- then there would be more reason for concern. A strong form of the virus would send the death rate -- and the panic levels -- sky high.

But the strength of that version of the virus is also a matter of debate. Many scientists believe the human form could be milder than that affecting birds. Also, the disease appears to be treatable with the antiviral drug, Tamiflu (oseltamvir), which is known to be effective in the early stages or as a preventative treatment.

In the context of world population, infection negligible

So far, the virus has infected 169 people in seven countries, killing 91, according to the World Health Organization. Despite the mortality rate being just under 50 percent, in relation to the combined population figures of those seven countries, the number of people infected is minute and those who have died even more so.

The fact is the threat is real and people have died. But as the situation stands at the moment, the threat to humans is negligible. What's needed now, while there is still time, is information and prevention not sensationalism.

The bird flu outbreak on the northern German island of Rügen has spread to the mainland, officials say. Meanwhile new cases of H5N1 infection in Italy, France and India raise the threat of a global pandemic. (Feb. 20, 2006)

Germany's agriculture minister expects bird flu to spread throughout the country and urged officials to prepare for a worst-case scenario. Efforts to contain the disease have top priority, he said. (Feb. 19, 2006)